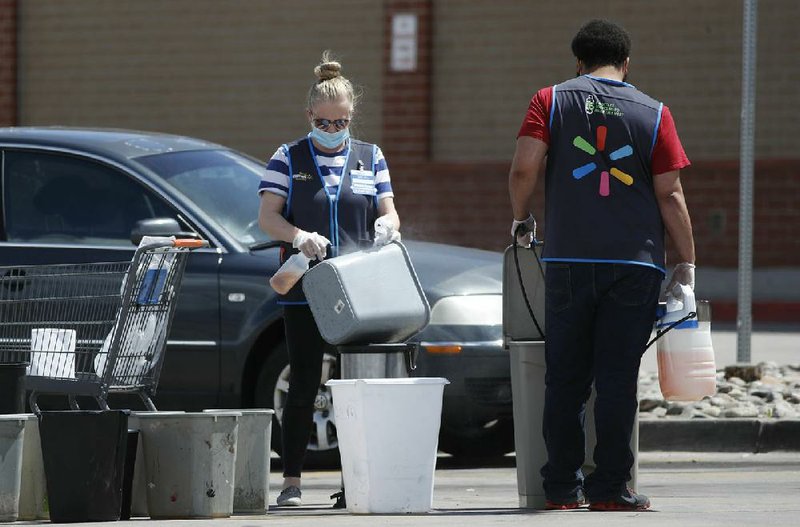 Workers sanitize items in a Walmart parking lot in Aurora, Colo. An analyst said he expects the company’s earnings report next month will more closely resemble that of Target Corp. than Walmart’s Mexico unit, which on Tuesday reported a surge in profit. (AP/David Zalubowski)

Walmart Inc.'s Mexican unit reported Tuesday that its first-quarter profit rose 15.4%. The company attributes the rise to the surge in shopping driven by the coronavirus pandemic.

The Bentonville-based retailer isn't likely to see a similar boost in profit when it reports first-quarter earnings on May 19, according to retail analyst Brian Yarbrough, who covers Walmart for Edward Jones.

Guilherme Loureiro, president and chief executive officer of Walmart de Mexico y Centroamerica, or Walmex, said in a presentation that the quarter's sales and results "are the product of the high demand for an essential service during the emergency," and not business as usual.

"When this situation finishes, we will face other challenges, so they should not be taken into account to forecast our future performance," Loureiro said.

Sales at stores open at least a year grew 10.8% in Mexico and 5.5% in Central America. Same-store sales are considered a key indicator of a retailer's health.

E-commerce sales in Mexico grew 68% and represented 1.6% of total sales in the quarter. The number of downloads of the company's mobile apps rose nearly 350% over last year's first quarter.

Milton Brandt, Walmex's interim chief financial officer, said in the presentation that the company continues to focus on delivering shareholder value as it navigates through the pandemic. Cash generation rose 11.3% in the quarter, he said.

Over the past 12 months, the company returned nearly $1.3 billion in dividends to shareholders, and invested $829.5 million into the business, Brandt said.

Yarbrough expects Walmart's results next month to more closely resemble those of Target Corp. than Walmex. He said Target has given several updates in the quarter and noted that much of its sales has shifted to online as social distancing has kept many shoppers out of stores.

Walmart profits most when people come into its stores, Yarbrough said, especially when they buy home goods and apparel, and curbside pickup is nearly as good. Shipping to homes brings in the lowest profit because of the costs involved.

"As we all know, Walmart loses money at online," Yarbrough said. "So as more and more sales shift online, and they're shipping and delivering to your home from distribution centers and stores, the more expensive it is and the more money they lose."

So while Yarbrough expects to see strong sales in Walmart's quarterly report, especially in e-commerce, he doesn't believe that will translate into higher profit.

Another issue for Walmart, Yarbrough said, is it remains strong in grocery sales, but sales of apparel and home goods, which are higher-margin categories, have likely taken a tumble.

Finally, the money Walmart is spending to hire workers and give temporary pay increases and early bonuses all cut into profit, Yarbrough said.

"Again, I'm very positive in the sales numbers, but I think the profit is going to be very questionable," Yarbrough said.