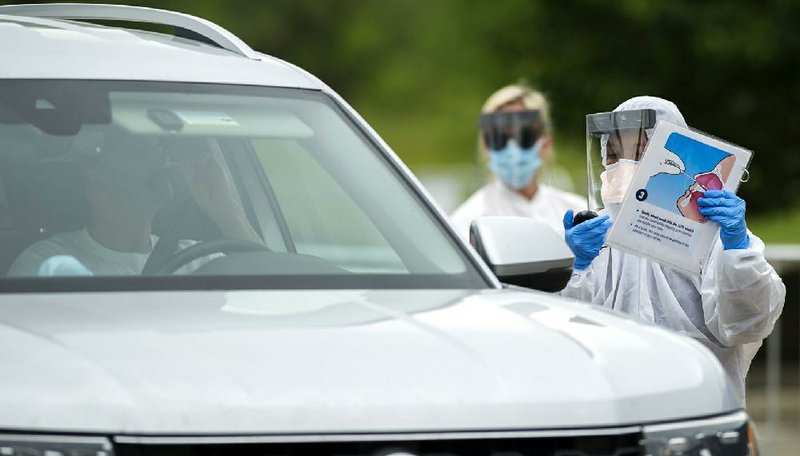 Pharmacist Robi Mostafa guides a patient through self-administration of a covid-19 test Monday outside the Walmart store on South Shackleford Road in Little Rock. (Arkansas Democrat-Gazette/Stephen Swofford) - Photo by Stephen Swofford

Walmart Inc. is adding three mobile testing units to reach areas in Georgia, Alabama and Kansas this week, the company said Tuesday. It's also opening about 25 stationary sites this week and expects to have more than 100 open by the end of May.

Dan Bartlett, Walmart's executive vice president of corporate affairs, said in a blog post that the mobile coronavirus testing system was created to expand access to the tests. The mobile units will bring drive-thru testing to several communities in each state, he said, rotating among three or four locations over the course of a week.

The Bentonville-based retailer has set up 21 testing sites in 12 states and is opening more every day, Bartlett said. Its goal to have more than 100 by May 31 depends on adequate lab capacity, he said.

Walmart works with two labs, Quest Diagnostics and eTrueNorth, to analyze the nasal swabs collected at the sites. The required appointments for testing must be made through the labs' online portals. Quest handles screening and scheduling at Walmart's three Arkansas testing sites.

"With 100 sites, we can bring 20,000 tests a week to people who need them, especially in hot spots and underserved areas," Bartlett said. "But we are anxious to do more and serve more communities where we are located," he said, noting that 90% of the U.S. population is within 10 miles of a Walmart store.

Most of Walmart's testing sites are in the parking lots of Supercenters and Sam's Clubs. The company has more than 5,300 stores and clubs in the U.S.

Bartlett said moving into the next phase of testing will involve making even more use of Walmart's pharmacies. Currently, its pharmacists are volunteers overseeing collections of the self-administered nasal swabs at each testing site.

But as new tests emerge, Bartlett said, and as testing capacity expands and test kits become more readily available, Walmart pharmacies nationwide will be able to distribute and collect the tests.

Emerging tests include both nasal and saliva tests to identify if the virus is present, and blood tests that look for antibodies to determine if a person has recovered from it, Bartlett said.

"Imagine going online, scheduling a test through our lab partners, pulling up to your local Walmart at your scheduled time, parking in your assigned spot and having our pharmacist greet you," Bartlett said. "You take a nasal or saliva test while you remain in your car, and the test is sent to the lab for processing."

Pharmacists could do the blood tests by finger pricks, like the testing done for blood glucose or cholesterol, Bartlett added.

Walmart also said Tuesday that the hours at its Bentonville testing site are changing now that it has two other Arkansas testing sites. The Bentonville location, on the grounds of Walmart's headquarters, will only be open Thursdays and Fridays between 9 a.m. and 4 p.m., weather permitting, the company said in a news release.

The Fort Smith site, which opened Tuesday, will operate Mondays through Wednesdays, and the Little Rock location will be open weekdays. Both sites will operate from 9 a.m. and 4 p.m., weather permitting.

All of Walmart's testing sites serve anyone with symptoms of covid-19, as well as health care workers and emergency responders regardless of whether they have symptoms of the virus. There is no out-of-pocket fee for the test.

Walmart and other large chain retailers told President Donald Trump on March 13 that they would make space in their parking lots available for coronavirus testing.

Executives from many of these companies, including Walmart Chief Executive Officer Doug McMillon, met again Monday with Trump to share their plans to increase testing -- provided adequate supplies and lab capacity are available.

One of those companies, the drugstore chain CVS Health Corp., said it expects to open as many as 1,000 testing sites nationwide by the end of May. The chain currently has testing locations in five states.

"Our industry has been united by the unique role we can play in addressing the pandemic and protecting people's health," CVS President and Chief Executive Officer Larry J. Merlo said in a news release. "We all share the same goal, and that's dramatically increasing the frequency and efficiency of testing so we can slow the spread of the virus and start to responsibly reopen the economy when the experts tell us it's safe."

Walgreens Boots Alliance Inc., parent company of the pharmacy chain Walgreens, said it will expand this week from its 18 covid-19 testing sites in 11 states to 23 sites in 15 states. Walgreens will eventually have sites in 49 states and Puerto Rico, with the scale and timing dependent on the availability of test kits and overall lab capacity, the company said in a news release.

The chain also began Monday to offer antibody testing at more than 100 of its "LabCorp at Walgreens" patient service centers, the company said.

Walgreens President Richard Ashworth said in the release that the chain will focus on improving access to testing. Over time, Walgreens plans to help businesses reopen by providing testing to their employees.