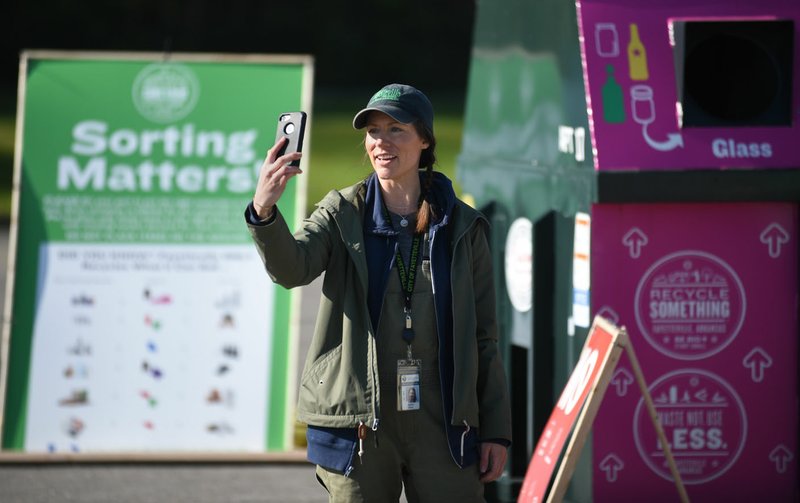 Heather Ellzey, environmental educator with Fayetteville's Recycling and Trash Collection, describes the sorting process Wednesday during a social broadcast at one of the recycling collection locations in the city. The city has suspended curbside pick up of recycling because of the coronavirus outbreak and the need for social distancing. Go to nwaonline.com/200420Daily/ and nwadg.com/photos for a photo gallery. (NWA Democrat-Gazette/David Gottschalk)

Collection has dropped by more than half since the city stopped picking up residents' recycling, said Brian Pugh, waste reduction coordinator. The city switched to a drop-off-only service March 23, adding four container sites to the two that existed.

Fayetteville residents can take recyclable material to any of the following sites:

Administrators wanted to reduce potential worker exposure to items that may have covid-19 on the surface. Even while wearing gloves, workers could spread the disease from bin to bin, which residents would then pick up to bring back to their homes, Pugh said.

Trucks collect about 80 tons of recyclable material on an average week, Pugh said. That number is more like 35 tons now.

"In essence, we're losing approximately 45 tons of recyclables a week," he said. "But at the same time, I'm extremely excited people are utilizing these drop-offs."

The city empties the containers daily at each site, Pugh said. The containers are categorized by type, such as plastics, newspaper, glass, aluminum and tin cans.

Workers have encountered some interesting finds in the containers, Pugh said. Laminate flooring, furniture and old printers all have found their way to the sites. That's not to mention the different types of recyclables thrown in all together or the bags of garbage.

Trash output spiked when people started working from home or practicing social distancing, and the city waived the fee it charges to pick up extra bags, Pugh said. Trash pickup is happening as usual. Trash trucks use mechanical arms that don't require an employee to touch the garbage.

The city has a curbside sorting program for recycling where workers pick items out of a resident's bin and put them in the relevant compartment of a truck. The materials are already separated when they get to the city's baling facility, Pugh said.

If everything is all mixed up upon collection, it has to be sorted at the point of baling. The baling process isn't set up as a sorting operation, Pugh said. Workers now take extra time and effort to ensure items are acceptable to the facilities doing the recycling.

"We still have to handle the materials," Pugh said. "We're finding trash in these containers and want to refocus people to read the signs and put in only those materials that we collect."

The extra work exposes workers unnecessarily, Pugh said. But, they've been successful. To date, all of the city's loads taken for recycling have been accepted.

Although curbside pickup has stopped, residents' trash rates have stayed the same.

Pugh said the cost of recycling is rolled into the rates for trash pickup, which vary based on cart size. The city is still recycling and has to be able to pay for the operation and pay its workers. Narrowing down the precise amount for recycling and extracting it from the bill would be difficult.

Curbside recycling pickup is still on in Springdale, Rogers and Bentonville. Those cities contract their services to private companies using mechanical arms to pick up bins with recyclable material mixed together. The contractors have access to third-party facilities where the items are sorted.

Rogers, for instance, contracts with Orion Waste Solutions. It takes a few days for the recyclables to reach the sorting facilities, and workers rarely sort by hand, said Kevin Gardner, director of municipal services for Orion.

The company also has had issues with residents putting trash in recycling carts as overflow, Gardner said. Doing that drives up costs because the third-party material recovery facility has to separate the trash, haul it and dispose of it at the landfill.

"That cost is passed back to Orion, as a contamination charge, at a much higher cost to us than we can provide that service if placed in the appropriate trash cart," Gardner said.

The extra cost gets passed to the cities, he said. The company sometimes has to ask city councils for extra money at the end of the year to cover the cost of handling contaminated batches.

"It all comes back to residents when it's all said and done, in reality," he said.

Residential recycling collection is up across the country, said Brandon Wright with the National Waste and Recycling Association, a trade group representing private waste and recycling companies in the United States.

People staying home more means more waste getting picked up, recyclable or not, Wright said. Curbside pickup hasn't slowed much. The federal Centers for Disease Control and Prevention and the Occupational Safety and Health Administration have not released safety guidelines specific to the handling of waste and recyclables.

Wright said his association advises recycling collectors to follow the same basic guidelines everyone else is asked to follow: wash hands, maintain social distancing and wear personal protective equipment. However, cities and private companies are free to set their own policies. Some won't pick up recyclable materials that aren't in a bin, for example.

Most cities are keeping their recycling collection programs going, according to a March 27 Bloomberg Green report. That's especially true of large cities such as Atlanta, New York and Salt Lake City that have deemed recycling service essential.

Fayetteville isn't alone in shuttering its curbside pickup. Dalton, Ga., a city of about 33,000, stopped curbside pickup to prevent potentially spreading the virus. Others are grappling with the issue. Some smaller cities worry about having enough workers to continue the operation if they fall ill, according to the Bloomberg Green report.