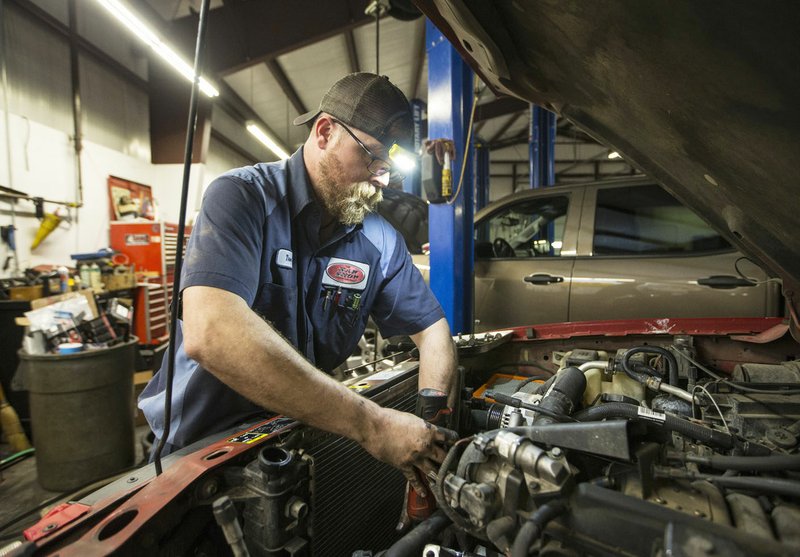 FAYETTEVILLE -- Congress is considering another $250 billion in aid to small businesses, and Northwest Arkansas chambers of commerce have no doubt it's needed.

"I've been talking to my peers in Florida, and they say this is just like a hurricane," said Raymond Burns, president of the Rogers-Lowell Area Chamber of Commerce, speaking about the covid-19 pandemic. "Everything is shut down, and when it's over, you see what's still there."

The difference is this disease outbreak lasts for weeks and is storming all over the country, he said.

"State government is not going to have enough money to help everyone who needs help," Burns said of the degree of assistance needed if many small businesses are to survive. Added relief money can only come from Congress, which is negotiating another $250 billion in small business aid in the Paycheck Protection Program.

The sheer scale of the assistance needed appears to have taken the national government by surprise, said Steve Clark, president of the Fayetteville Chamber of Commerce. Fayetteville alone has at least 3,600 qualifying businesses, he said.

The money is needed, but some of the requirements attached to assistance should be dropped, said Mervin Jebaraj, director of the Center for Business and Economic Research at the University of Arkansas' Walton School of Business.

"There is no 'one size fits all' program for small business," he said.

The payroll program as written requires a small business to have kept 75% of its employees on the payroll through the economic crisis, he said. Employers whose employees were laid off because they would be better off financially with increased unemployment benefits could now be ineligible. That includes employers who were unable to get any of the quickly drained first round of assistance.

Also, 75% of the benefits received are earmarked for payroll, Jebaraj said.

"If someone has a restaurant in a high-profile, highly visible area where your biggest expense is rent, that doesn't help," he said. "In fact, it has sometimes made it worse. Landlords sometimes are not negotiating on rents because they think those businesses can get money from the program."

Many of the instructors at gyms and fitness clubs are private contractors, Jebaraj said. This limits a gym owner's eligibility to get payroll assistance because so many people working there are not his direct employees.

Not far down the road, states and local governments will need federal assistance, too, as the business plunge guts sales tax revenue, he said.

Co-owner Jack Kingston of the KAR Shop in Rogers is trying to keep his crew together, he said. He and his brother, Keith, are using a newly invented combination of sick leave, the paycheck protection assistance, some unemployment benefits, rotating schedules and the auto repair shop's own emergency reserve fund to pay employees at a time when business is about 25% of normal, he said Wednesday.

"We are running with a skeleton crew, bringing in one technician at a time," Kingston said. "It's hard to get good technicians, so we're doing what we can."

Nine people normally work in the shop at a time, but less than one-half do now. They have room to keep the recommended distance apart to impede any spread of the virus, and "the counter is wiped down almost constantly," he said. The waiting room is closed. Bottles of hand sanitizer are scattered throughout the business and used repeatedly.

Applying for and getting federal benefits is complicated, but manageable, Kingston said. It's also just one piece among the other factors affecting management decisions.

The biggest problem is accommodating the uncertainty of when the pandemic's grip will end, Kingston said. It's a question that simply cannot be answered now.

"People are still cautious," he said.

The business is mostly repairing items their customers cannot put off: a flat tire, engine warning lights flashing, a disturbing rattle or shaking.

"We're basically putting out fires," he said. "We just need to be patient and cautious. We'll all come through this and be better in the end, but it is a totally unique situation. We should pray, too."

Recovery from the virus' economic effects will take time, Burns said. Neither businesses nor their customers want a another round of the disease.

"When the restaurants open again, they are not going to seat people back to back," he said. "They aren't going to crowd us together."

The disease has reached a state where its effects are getting personal, Clark said.

"When you hear a number, that's a statistic. When it's your mom who has it or the mom of someone you know, it's not a statistic anymore."

Congress won't be back in session until Monday. The time isn't wasted though.

"Those members of Congress are definitely hearing from their constituents that they need to pass this," he said. Members of Arkansas' congressional delegation have also been diligent in staying in touch throughout the emergency.

"When they get back in session, I expect they will pass something very quickly," Clark said. "It will not be everything they need to do, but it will be what parts they agree on. The parts they disagree on will come later."

"It quickly became apparent that another injection of funds would be necessary -- that should have been passed last week," Womack, of Rogers, said Thursday.

"Will it be enough? I wish I had an answer to that, but this is a constantly evolving situation. Right now, we need to immediately replenish the program. There will be time for debate on further relief legislation in the future, but people's livelihoods are on the line. The end cost gets higher every minute we don't act."

"There is an immediate need to increase funding to the program because the money has run out, but there are still many small businesses in need of assistance," the senator said in a statement. "I am confident Congress will approve additional resources to support its continuation."