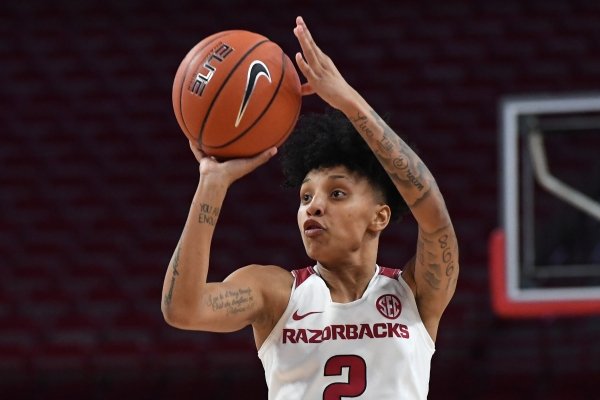 Alexis Tolefree attempts a jumpshot in Arkansas' 91-41 win over Tulsa on Wednesday Dec. 11, 2019 at Bud Walton Arena in Fayetteville. Tolefree is hoping to hear her name called Friday night during the WNBA draft.

FAYETTEVILLE -- Former University of Arkansas guard Alexis Tolefree is among those hoping her phone rings tonight when all three rounds of the WNBA Draft are aired on ESPN beginning at 6 p.m.

Twelve WNBA teams will select 36 total players in the draft, which takes place while the WNBA is shut down due to the coronavirus pandemic.

ESPNW ranked Tolefree the No. 22 prospect in the draft earlier this week.

"To see my name at No. 22, that was big for me," Tolefree said. "I never really imagined myself being in that spot. You dream about it, but once it's finally here, it's like a dream come true."

Only six previous Razorbacks have been drafted by the WNBA since its first draft in 1997. The last one was C'eira Ricketts, who was selected in the second round as the 24th overall pick in 2012.

Tolefree's final year at Arkansas included All-SEC first-team honors. She averaged 16.3 points, shot 40% from three-point range and helped lead the Razorbacks to their first ranking in the final Associated Press Top 25 poll since 2003.

One knock on Tolefree, who is 5-8, has been her size. ESPN women's college basketball analyst Charlie Creme wrote, "size and strength are question marks."

"Obviously her physical strength and size is going to be a question, and people tried to take advantage of her this year," Arkansas women's basketball Coach Mike Neighbors said. "Well, we're just going to post Tolefree up. OK, let me know how that works out for you.

Alexis Tolefree is looking to become Arkansas’ seventh player drafted by the WNBA, which began its draft in 1997. Here are the six other Razorbacks who have been drafted:

"It was a tough, tough matchup for teams to try and decide how they are going to guard her. It's one thing to show a kid on film, 'Hey, you're going to have to guard Alexis Tolefree at 30 feet,' but it's another thing to realize where that actually is on the floor."

Her strengths are what Tolefree believes the WNBA wants.

Neighbors also praised her defense and ability to get her hands on the ball, as well as her locker-room presence.

"She's a great locker-room kid. She's a great teammate," he said. "When they're drafting in the WNBA, they're not really drafting starters. They've got a roster full of those. There are only 11 spots on 12 teams, so it is a hard job market to break in to.

Tolefree has found a small church gym to continue getting shots up since the University of Arkansas closed down last month. She also has been working on the mental side of her game.

"There is no training camp. I can't send videos or anything, so it's really just been me waiting patiently," she said. "Talking back and forth with my agent, seeing what she has to say, but really it's just me waiting and waiting."

Playing professional basketball always has been a goal for Tolefree.

"I want [my family] to be able to explore the world someday, and I want to make that happen for them and for myself," she said.

"I would tell you that less than half the people we recruit actually have professional basketball dreams," Neighbors said. "Lex is one that knew she wanted to play for as long as she could."

Tolefree was a star at Conway, where she played in three state title games and won one. But coming out of high school, her prospects were limited. After signing with the University of Central Arkansas, she decided to leave Conway and play at Jones County (Miss.) Junior College.

After two standout years there, she received offers from Baylor and, in her words, pretty much everybody in the SEC except for South Carolina.

Tolefree started 36 of 37 games for Arkansas during her junior season, when she averaged 10.2 ppg.

"She didn't have a junior year like she wanted," Neighbors said. "She took coaching and said, 'OK, I can do that.' She came back, and I think she obviously had a legacy-leaving year."

Tolefree has a backup plan if the WNBA doesn't call Friday.

"I don't like being cold, so somewhere warm. That's all I ask." 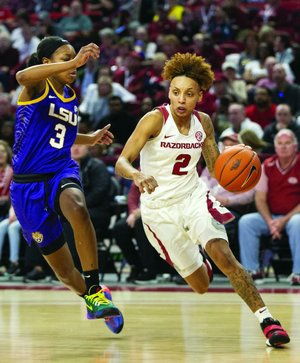 Former University of Arkansas guard Alexis Tolefree was ranked the No. 22 prospect in the draft earlier this week by ESPNW. (Special to NWA Democrat-Gazette/David Beach) 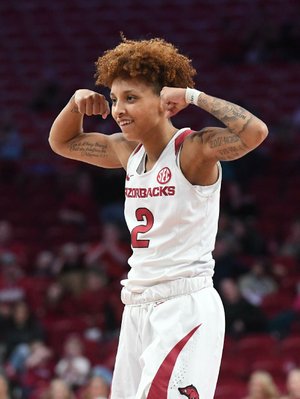 Former Arkansas guard Alexis Tolefree was an All-SEC first-team selection this season after averaging 16.3 points per game. This week, ESPNW ranked Tolefree as the No. 22 prospect for tonight’s WNBA Draft. (NWA Democrat-Gazette/J.T. Wampler)