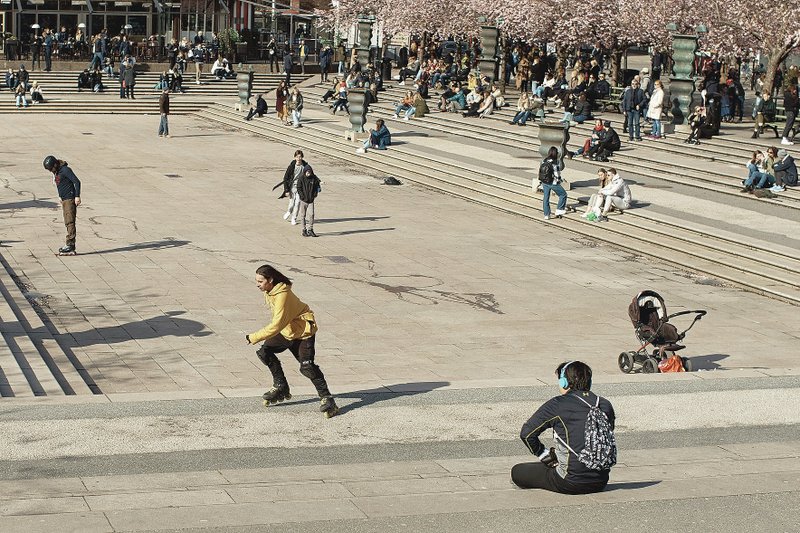 STOCKHOLM -- Crowds swarm Stockholm's waterfront, with some people sipping cocktails in the sun. In much of the world, this sort of gathering would be frowned upon or even banned.

It doesn't worry Anders Tegnell, the country's chief epidemiologist and top strategist in the fight against the coronavirus pandemic.

The 63-year-old has become a household name in Sweden, appearing across the media and holding daily briefings outlining the progression of the outbreak with a precise, quiet demeanor.

As countries across Europe have restricted the movement of their citizens, Sweden stands out for what Tegnell calls a "low-scale" approach that "is much more sustainable" over a longer period.

President Donald Trump has suggested that a rising number of covid-19 deaths indicate Sweden is paying a heavy price for embracing the idea of herd immunity -- that is, letting many individuals get sick to build up immunity in the population. He said: "Sweden did that -- the herd. They called (it) the herd. Sweden is suffering very, very badly. It's a way of doing it."

But Swedish Health Minister Lena Hallengren recently said, "We have never had a strategy for herd immunity."

So far, Sweden has banned gatherings larger than 50 people, closed high schools and universities, and urged those over 70 or otherwise at greater risk from the virus to self-isolate.

The softer approach means that schools for younger children, restaurants and most businesses are still open, creating the impression that Swedes are living their lives as usual.

Yet as Johan Klockar watches his son kick a ball around a field during a soccer practice in Stockholm, the 43-year-old financial analyst says it's not like that. He and his wife work from home and avoid unnecessary outings. They socialize in a very small circle and limit their son's contacts to people he sees at school or soccer practice.

"Society is functioning, but I think it's quite limited," Klockar said. "Other than this sort of situation -- schools, soccer practice -- we basically stay at home."

And while most businesses in Sweden are still operating, the economic cost of the pandemic is already being felt. Last week, 25,350 Swedes registered as unemployed, according to the Stockholm Chamber of Commerce -- a larger increase than during the 2008 financial crisis.

In contrast, just across a narrow strip of sea, neighboring Denmark is already talking about reopening society. They imposed a much stricter lockdown four weeks ago, closing borders, schools and businesses. This week, the prime minister said by acting early, Denmark averted the tragedy that struck hard-hit nations like Italy and Spain, which together have seen at least 37,000 virus-related deaths, and will be ready soon for a slow return to normal life that starts with reopening preschools and primary schools.

For weeks, the numbers of covid-19 cases and fatalities were proportionally similar between Sweden and Denmark, but while the economic results of the strict isolation are being felt in Denmark, Sweden's mortality rate has reached more than 88 dead per million, compared with around 47 dead per million in Denmark.

Sweden, with a population of 10 million, has registered 899 deaths, while Denmark, with 5.8 million people, has 273 deaths. Worldwide, the virus has infected a reported 1.8 million people and killed 114,000, according to a tally by Johns Hopkins University. Still, due to limited testing, different ways of counting the dead and deliberate under-counting by some governments, experts believe those numbers vastly understate the pandemic's true toll.

After a sharp spike in deaths in Sweden, Prime Minister Stefan Lofven proposed an emergency law allowing the quick closure of public venues and transportation if needed. Lofven also warned citizens to prepare for possibly up to thousands of deaths.

Nevertheless, Tegnell, the chief epidemiologist, insists that Sweden's approach still seems to make sense, though he also acknowledges that the world is in uncharted territory with the virus.

He argues while Sweden might have more infections in the short term, it will not face the risk of a huge infection spike Denmark might face once its lockdown is lifted.

"I think both Norway and Denmark are now very concerned about how you stop this complete lockdown in a way so you don't cause this wave to come immediately when you start loosening up," he said.

He said authorities know the physical distancing Swedes are engaging in works, because officials have recorded a sudden end to the flu season and to a winter vomiting illness.

Lars Ostergaard, chief consultant and professor at the Department of Infectious Diseases at Aarhus University Hospital in Denmark, agrees it is too soon to know which approach is best.

"Every day a person is not being infected because of the strict lockdown, we are a day closer to a cure," Ostergaard said, underlining the advantage of the Danish approach. But he acknowledges the long-term consequences of a locked-down community could also be "substantial."

"There is no right or wrong way," Ostergaard said. "No one has walked this path before, and only the aftermath will show who made the best decision." 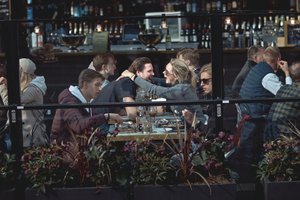 A couple hug and laugh Saturday as they have lunch in a restaurant in Stockholm, Sweden. (AP/Andres Kudacki) 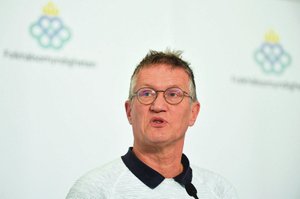 State epidemiologist Anders Tegnell of the Public Health Agency of Sweden talks during a daily news conference April 9 on the coronavirus, Covid-19 situation, in Stockholm, Sweden. Tegnell is the country's chief epidemiologist and top strategist in the fight against the coronavirus pandemic. The 63-year-old has become a household name in Sweden, appearing across the media and holding daily briefings outlining the progression of the outbreak with a precise and quiet demeanor. (TT/Anders Wiklund) 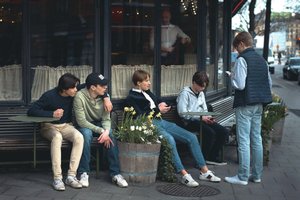 Youths hang out April 8 outside a restaurant in Stockholm, Sweden. (AP/Andres Kudacki) 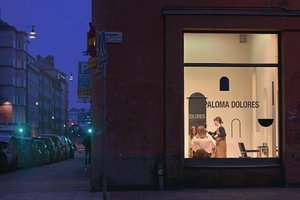 A hair stylist works April 8 inside her shop in Stockholm, Sweden. Crowds swarm on Stockholm's waterfront, some sipping cocktails in the sun. In much of the world, this sort of gathering would be frowned upon or even banned. Not in Sweden. (AP/Andres Kudacki) 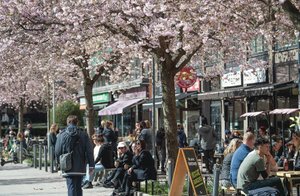 People sit outside Saturday in the sun at a cafe bar in central Stockholm. Swedish authorities have advised the public to practice social distancing because of the coronavirus pandemic, but still allow a large amount of personal freedom, unlike most other European countries. (TT/Anders Wiklund) 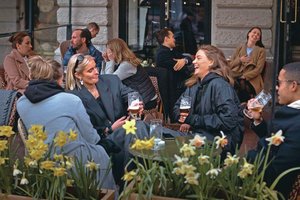 People chat and drink April 8 outside a bar in Stockholm, Sweden. Sweden is pursuing relatively liberal policies to fight the coronavirus pandemic, even though there has been a sharp spike in deaths. The prime minister has proposed a new emergency law that would allow the authorities to close public venues and transportation quickly if needed. (AP/Andres Kudacki) 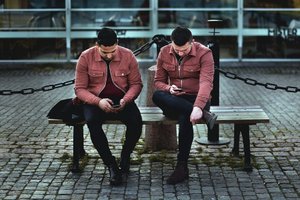 Two men check their phones April 8 as they sit near the harbor in Stockholm, Sweden. (AP/Andres Kudacki)