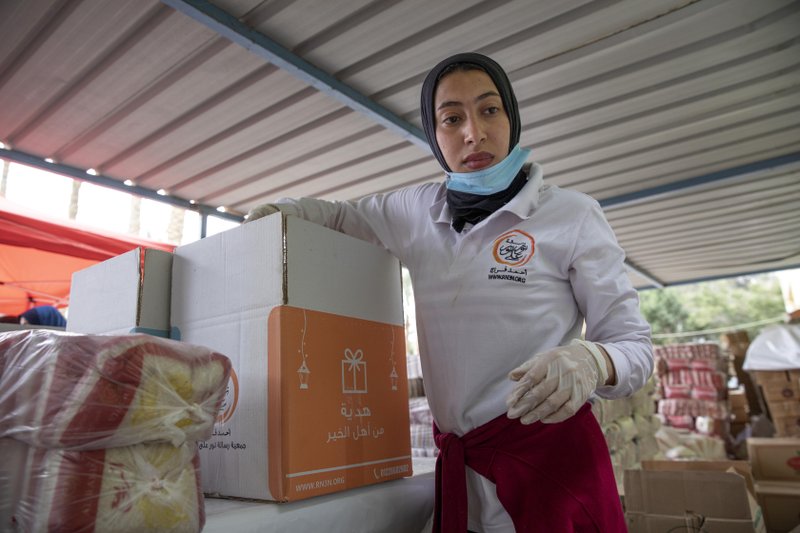 Non-governmental organization Resala Nour Ala Nour workers prepare cartons filled with food to distribute to people who have been greatly affected by the coronavirus outbreak, in Cairo, Egypt, Thursday, April 9, 2020. (AP Photo/Nariman El-Mofty)

DUBAI, United Arab Emirates -- Iran's supreme leader suggested Thursday that mass gatherings may be barred through the Muslim holy month of Ramadan amid the coronavirus pandemic.

Meanwhile, Amnesty International said it believes at least 35 Iranian prisoners were killed by security forces suppressing riots by inmates over the virus.

Supreme Leader Ayatollah Ali Khamenei made the comments in a televised address as Iran prepares to restart its economic activity while suffering one of the world's worst outbreaks. He is also the highest-ranking official in the Muslim world to acknowledge the holy month of prayer and reflection will be disrupted by the virus and the covid-19 illness it causes.

"We are going to be deprived of public gatherings of the month of Ramadan," Khamenei said during a speech marking the birth of revered 9th century Shiite Imam Mahdi. "In the absence of these meetings, remember to heed your prayers and devotions in your lonesomeness."

Ramadan is to begin in late April and last through most of May. Iranian public officials had not yet discussed plans for the holy month, which sees the Muslim faithful fast from dawn until sunset. However, Iranian mosques have been closed and Friday prayers canceled across the country for fear of contagion.

Iran has reported over 66,000 confirmed cases of the new virus, with over 4,100 deaths as of Thursday.

Khamenei's comments come after Egypt's Ministry of Religious Endowments called off all celebrations and late-evening prayer services for Ramadan. Mosques and churches have already closed for prayers across Egypt.

Egypt's Health Ministry on Thursday reported 15 more deaths from the virus in the country -- the biggest single-day jump so far, bringing the death toll to 118 from among 1,699 reported cases.

The pandemic also looms over holiday celebrations in Lebanon, where Muslims and Christians make up most of the population. The government on Thursday extended movement restrictions for two more weeks.

In Jordan, which has taken severe action to stop the spread of the coronavirus, a 48-hour complete lockdown was set to take effect at midnight Thursday.

In its report, Amnesty said thousands of prisoners in at least eight prisons had rioted over their fears about potentially contracting the virus while incarcerated, and that it believes at least 35 inmates were killed by security forces in Iran.

Iranian President Hassan Rouhani has ordered the country's economy to slowly begin opening back up starting Saturday, leading to worries the nation could see a second wave of infections.

Khamenei, who has final say on all state matters, made a point to remind Iranians that the U.S. is the main enemy and mocked Americans who fought over toilet paper at stores and lined up outside of gun shops to purchase firearms.

"The problem of coronavirus must not make us ignorant of the plots of enemies and the arrogant power," he said.

Information for the article was contributed by Isabel DeBre, Omar Akour and Sarah El-Deeb of The Associated Press.