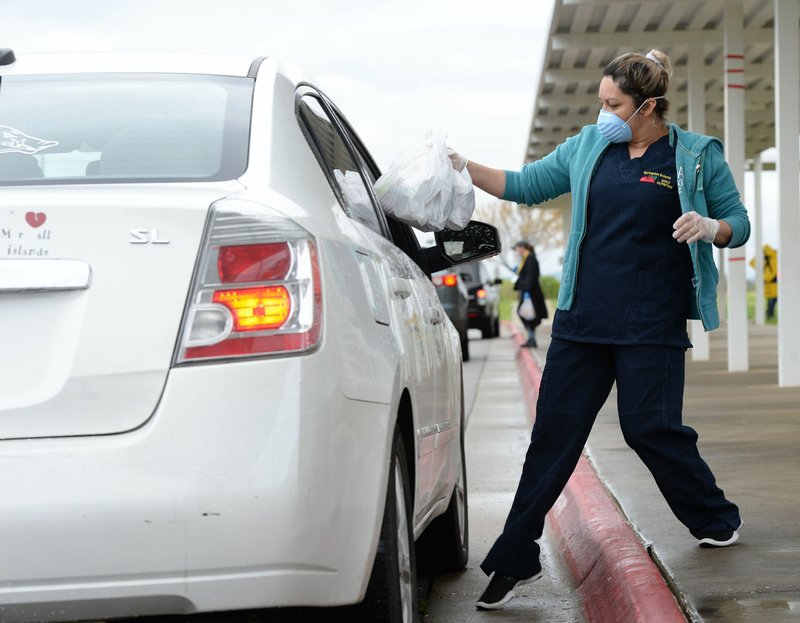 Laura Flamenco, cafeteria manager at the Tyson School of Innovation in Springdale, hands out sacked lunches Friday for children in the district at Bayyari Elementary School in Springdale. Go to nwaonline.com/200404Daily/ for today's photo gallery. (NWA Democrat-Gazette/Andy Shupe)

BENTONVILLE -- Some school districts in Northwest Arkansas are adjusting meal distribution procedures to reduce the risk of spreading the novel coronavirus.

The state's public schools have been closed to in-school instruction since March 16. Gov. Asa Hutchinson announced Monday they will remain closed for the rest of the school year.

School districts have continued to provide meals for students throughout the shutdown.

The Fayetteville School District delivered meals to certain locations each weekday during the first week of the shutdown. The district switched last week to a once-per-week distribution of 10 meals -- five breakfasts and five lunches -- to any person 18 years old or younger.

"We went from five days to one to keep people safer -- not only my staff, but also kids and community members," said Ally Mrachek, Fayetteville's child nutrition director.

The weekly schedule started March 31, when the district gave out 4,470 meals at a single location, Owl Creek School. They ran out of meals that day, Mrachek said.

Adjusting to the demand, the district brought in six more workers and expanded from one distribution location to five this week. They handed out 12,150 meals Tuesday, nearly triple last week's total, Mrachek said. They did not run out of meals this time.

"We had huge support from the maintenance department as far as transportation and lifting meal boxes. We've also been working some very long days," she said.

Fayetteville is using about 30 of its 85 food service staff members. No staff member has said they aren't willing to come in to work out of fear of getting sick, Mrachek said.

Meals are prepackaged to last up to five days and should be consumed within that time. If families miss a pick-up date, the Outback food pantry on the ALLPS campus at 2350 W. Old Farmington Road is open from 11 a.m. to 1 p.m. every Wednesday.

The Springdale School District started a new schedule this week where meals are distributed Monday, Wednesday and Friday instead of each weekday. The meals can be picked up between 11:30 a.m. and 12:30 p.m. at one of 10 schools throughout the district.

Children get two lunches -- one hot, one cold -- and two breakfasts on Monday and Wednesday, and one lunch and one breakfast on Friday.

"It's to limit exposure to the public for our staff and have fewer days for the students and parents to have to leave their homes," said Gena Smith, Springdale's director of child nutrition.

The district was serving between 3,500 and 4,000 kids daily. On Monday, 2,822 kids picked up their allotment of meals, meaning workers handed out 11,288 meals that day. Smith said she anticipates those numbers will grow.

When the schools closed last month, the district had to shift gears quickly, from serving 16,000 students a day at 29 schools to several thousand students at fewer locations.

Employees gathered all the perishable food they could from the schools. Some was donated to the Northwest Arkansas Food Bank, but the district used most of it, Smith said.

About 120 employees, a little more than half of Springdale's food service department staff members, are able to work. The rest are in the high-risk category when it comes to contracting covid-19, Smith said.

Siloam Springs School District is providing meals to about 2,000 kids across its community through bus routes and grab-and-go sites at most of its schools, said Superintendent Jody Wiggins.

The district next week will start distributing meals only on Monday and Wednesday but will provide enough meals for five days, he said.

ID may be required

Rogers, which is giving out about 2,600 breakfast and lunch meals at six sites, is considering moving to a three-day-per-week schedule, said Margie Bowers, the district's food services director.

Rogers has arranged with Hiland Dairy to provide ice cream once a week at each of the distribution sites starting next week, "just to give the kids an extra treat," Bowers said. "They still need to feel special."

Bentonville has seen its meal distribution numbers rise since schools closed. The district gave out 1,592 breakfasts and lunches April 1 and 1,814 on Tuesday, said Michael D'Angelo, general manager with Aramark of Bentonville Schools. Aramark is the district's food service provider.

For now, Bentonville plans to stick with distributing meals Monday through Friday. That way, if students miss a pick-up time any day other than Friday, they don't have to wait multiple days for the next date, D'Angelo said.

Aramark normally employs about 140 people to work in Bentonville's cafeterias but is using only 15 during this time that schools are closed. The rest have been temporarily laid off, D'Angelo said.

Springdale, Fayetteville and Rogers use their own employees in food service, and none have lost their jobs during this time, according to officials from the districts.

Bentonville and Rogers both waive the rule that children need to be present to receive a meal. The U.S. Department of Agriculture last month granted states the option to allow parents or guardians to pick up meals.

"That has helped a little bit, I'm sure, for parents not having to get kids in the car," said Mary Denny, Bentonville's nutrition service manager.

Bentonville requires adults to provide some proof they have kids, Denny said. If a child is not present during meal pick-up, parents or guardians must show either an official letter/email from the school listing children enrolled, attendance record from the parent portal of the school website, the child's birth certificate or student identification cards. Pictures of any of these items are acceptable, according to district policy.

Rogers generally doesn't verify students. Bowers said most parents come to the meal pick-up sites with their kids anyway, adding she has "every confidence" the meals are going to children.

"We do ask them how many children they have at home," Bowers said. "It's pretty much the same folks who come through every day."

Fayetteville and Springdale still require kids be present when they pick up their meals.

"Based on our current capacity, the waiver would push us beyond what we have staff and equipment to do," Fayetteville's Mrachek said. "The waiver could allow for people to show up and request any number of meals."

Fayetteville may revisit the waiver if its capacity expands, she said. 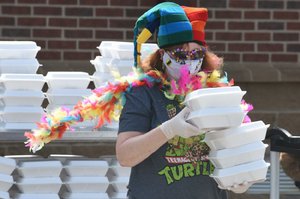 Kathy Passmore, a kindergarten teacher at George Elementary School, wears a costume as she brings meals Wednesday, April 8, 2020, to students and parents during a Curbside Meal Pick-up at the school in Springdale. The school prepared a total of 1,800 meals to distribute three meals per child. The school is one of 10 sites the Springdale School District is distributing meals. Visit nwaonline.com/200409Daily/ and nwadg.com/photos for a photo gallery. (NWA Democrat-Gazette/David Gottschalk)

Where and when Northwest Arkansas’ largest school districts are giving out breakfast and lunch meals for people 18 years old or younger.

Meals are distributed Mondays through Fridays, 11 a.m. to noon. Parents or guardians can pick up meals without kids present if they present certain documentation.

Meals are distributed Mondays through Thursdays, 11:30 a.m. to 12:30 p.m. (Two days’ worth of meals are provided Thursdays.) Children do not need to be present.

Meals are distributed Mondays, Wednesdays and Fridays, 11:30 a.m. to 12:30 p.m. Meals for two days are given out Mondays and Wednesdays. Children must be present to receive meals.