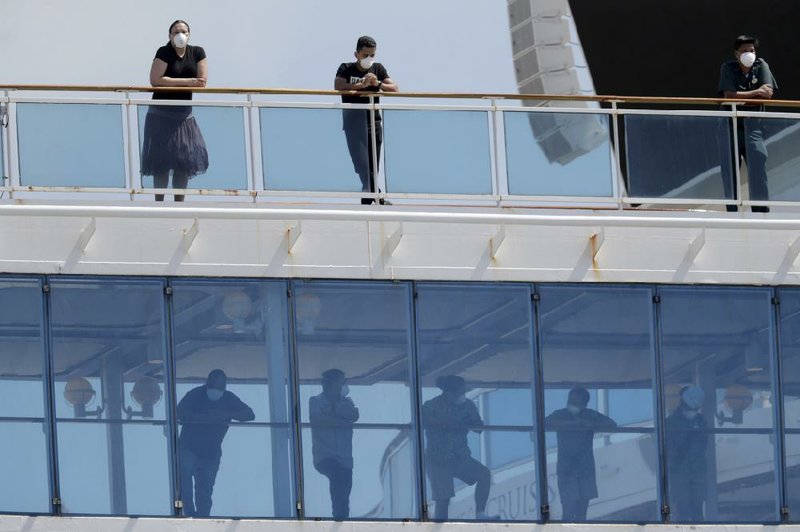 Passengers look out from the Coral Princess cruise ship, docked Saturday at the Port of Miami. As social distancing grew more common as a method to slow the coronavirus, cruises were among the first activities Americans started avoiding. More photos at arkansasonline.com/48ships/. (AP/Lynne Sladky)

First, there was the Diamond Princess, stranded off the coast of Japan as the coronavirus infected hundreds of passengers. Then the Westerdam, circling in the sea for days with nowhere to dock. Then the Grand Princess, the Costa Luminosa and the Zaandam.

Cruise ships have been a focal point of the coronavirus pandemic from the beginning, frequently blamed for a series of major outbreaks that spread the disease across the world.

Now, the companies that own those ships face a potential financial catastrophe. With most international travel halted, they have virtually no revenue. And despite assurances from President Donald Trump, they were left out of the $2 trillion stimulus package Congress passed last month. While analysts say the major cruise lines have enough money to survive at least another six months, the companies are scrambling to line up new financing in anticipation of a slowdown that could last even longer.

The Carnival Corp., which has nearly 11.5 million travelers a year, or roughly 50% of the global cruise market, is at the center of the crisis. During the past couple of months, the company has had highly publicized outbreaks on several of its ships, including the Diamond Princess and the Zaandam, which has been attempting to unload sick passengers in Florida.

Since the beginning of the year, the company's share price has plummeted more than 80%, though Monday it rose sharply -- to $10.21 a share -- after Saudi Arabia's state investment fund said it had acquired a stake in the company. And last week, Carnival, which has already drawn on bank credit lines, began an effort to raise $6 billion by selling stock, bonds and other securities. It was selling some of those bonds with a suggested 12.5% interest payment to investors, a strikingly high figure.

In an interview, Carnival's chief executive, Arnold Donald, said the sale would generate enough cash for the company to survive without revenue for the rest of the year and into 2021. He added that Carnival hoped to take advantage of stimulus programs in other countries where it operates, like Germany, Britain and Australia.

"If you run out of cash, you lose the company, and we can't live with that," Donald said. "So we want to make sure we're prepared for an extreme case."

Last week, a voluntary one-month suspension of cruise travel became much longer, with some companies canceling voyages scheduled for October and November. Donald acknowledged that it was a precarious moment. The high interest rate on the debt deal "is absolutely going to be a challenge to us," he said.

[Video not showing up above? Click here to watch » https://www.youtube.com/watch?v=THvJBEzY1Co]

"It's not fun to be floating equity at the share price it is," he added. "It's very disappointing."

Before the equity offering, Goldman Sachs, JPMorgan Chase and Bank of America had been working to put together a debt deal for Carnival that would offer some investors a potential return in the high teens, according to two people familiar with the discussions. Bankers pitched the deal to hedge funds and private equity investors, some of whom passed on it because of concerns about the company's long-term viability.

In February, cruise ships became an early symbol of how rapidly the coronavirus could spread in confined spaces, when more than 700 passengers on the Diamond Princess became infected as the ship idled off the coast of Japan. As social distancing grew more common in February and early March, cruises were among the first activities Americans started avoiding.

Still, industry experts hope that hard-core cruise fans will come back relatively quickly once the pandemic ends, though even the optimists acknowledge that getting people to go on cruises for the first time will require steep discounts and aggressive marketing. Another challenge: About one-third of cruise passengers are 60 years old or over -- a group at higher risk of serious infection that might be reluctant to risk exposure.

For Carnival, the initial coronavirus outbreak in Asia led to weeks of criticism, as the company fumbled its response to the situation on the Diamond Princess. Another of its ships, the Grand Princess, had a cluster of infections last month as it headed to California.

Last month, Donald and other industry leaders held talks with the White House coronavirus task force led by Vice President Mike Pence. In those conversations, Donald said, he pushed for a federal loan guarantee that would allow the cruise companies to obtain funding at lower interest rates. And Micky Arison, the chairman of Carnival's board, has had several calls with Trump, who last month described the cruise lines as "prime candidates" for federal support.

But under the terms of the stimulus package Trump signed into law, the major cruise lines did not qualify for funding because they are incorporated outside the United States, which largely exempts them from paying federal income taxes.