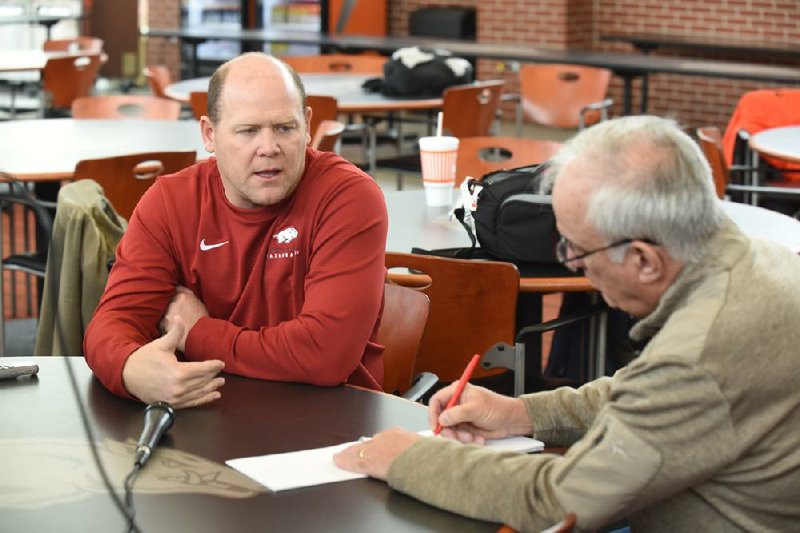 Barry Odom, an assistant coach with the University of Arkansas football team, speaks with members of the media Thursday, February 6, 2020, inside the Fred W. Smith Football Center on the campus in Fayetteville. Ten football assistants participated in the interview process. Check out nwaonline.com/200207Daily/ and nwadg.com/photos for a photo gallery. (NWA Democrat-Gazette/David Gottschalk)

Arkansas made the cut for linebacker Collin Oliver despite his inability to visit Fayetteville.

The coronavirus and correlating NCAA recruiting dead period has kept him from visiting Arkansas, Ole Miss and Utah.

“It’s put a hold on all visits I wanted to go to, as well as being on the field with my guys,” Oliver said.

While most prospects believe the dead period will delay their college decision, Oliver isn’t so sure of that.

“Honestly, no. I’m keeping on pace for my decision date," Oliver said. "If anything, it’s made me want to commit early."

The coaching staff and upside of the program helped the Razorbacks land on his list.

“I feel like the sky is the limit for them,” Oliver said. “Their coaching staff and the players they just got in are really high caliber.”

“They are talking about how they are up and coming and look forward to building that group of young people with great personality to get the program back running,” Oliver said.

CBS Sports Network national recruiting analyst Tom Lemming met with Oliver before the impact of the virus on sports and everyday life.

Oliver has a 475-pound squat, 315-pound power clean and 35-inch vertical. He missed five games because of a bone contusion in his right knee, but still recorded 30 tackles, 5 quarterback hurries, 2 sacks, an interception and 3 recovered fumbles as a junior.