End in sight for completing Interstate 49 around Bella Vista 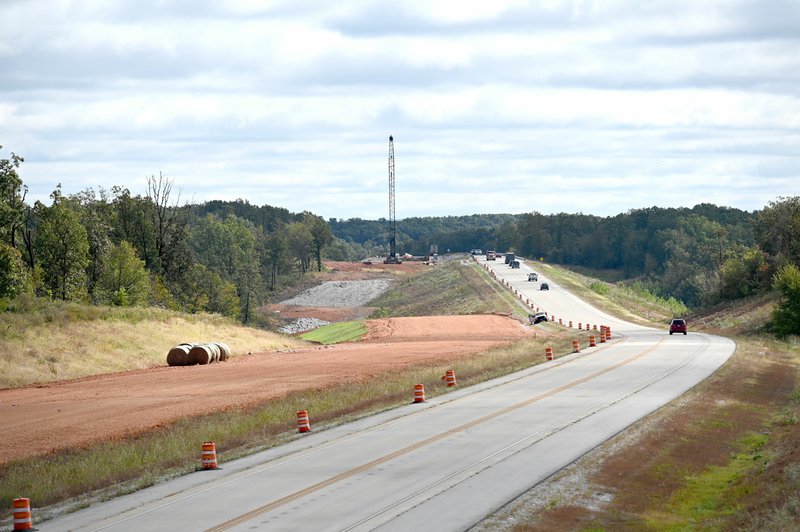 The Missouri Highways and Transportation Commission on Wednesday awarded a project to build the final 5 miles of I-49 between Pineville and the Missouri/Arkansas line in McDonald County, according to a news release from the Missouri Department of Transportation.

Weather permitting, crews will be doing paving and striping at the Arkansas 549/Bella Vista Bypass roundabout from Sunday through Saturday, April 11 to allow for continued construction. Crews will be using flagging operations, signs, and police enforcement to alternately close various lanes on roads connecting with the roundabout, including the northbound ramp to Arkansas 549/Bella Vista Bypass, northbound and southbound North Walton Boulevard, and northbound I-49 during overnight hours.

Watch for warning signs and safety personnel during the work. The public is advised to be cautious when traveling in the work zone.

The project was awarded to Emery Sapp & Sons of Columbia, Mo., for $58.7 million. Construction is expected to begin in late April or early May with completion by Sept. 30, 2021. The company has built several other parts of Interstate 49 and the bypass.

The road will be a four-lane, limited access highway built to interstate standards. An interchange will be built at Missouri Route 90 west of Jane.

The Northwest Arkansas Regional Planning Commission got a $25 million federal grant in December 2018 and gave the money to Missouri to complete I-49. The I-49 Missouri project is in the commission's planning area.

The goal is for Arkansas and Missouri to each build their parts and meet at the state line in late 2021, or early 2022 at the latest, according to regional planners. The 19-mile connector will allow motorists to circumvent Bella Vista to the west and south on a four-lane interstate.

The project has been discussed for more than 25 years and is considered a priority by Northwest Arkansas and federal transportation officials. The Northwest Arkansas Council, a group of civic and business leaders, prioritized completion of the highway, describing it as one of the region's most important projects.

A lack of money for the missing section had been delaying completion of the 278-mile section of interstate between Fort Smith and Kansas City, Mo. Bella Vista is the only stretch where traffic has to leave I-49 and continue on U.S. 71 to travel north or south. Allowing motorists to bypass Bella Vista, and its multiple traffic signals, should reduce travel times and improve safety, planners have said.

Arkansas officials broke ground in October on two sections needed to fill missing links on the Arkansas side.