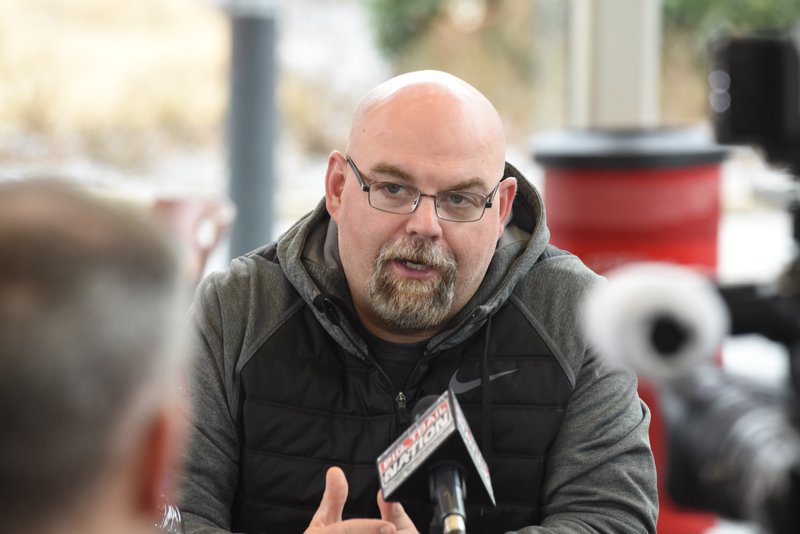 Rion Rhoades, an assistant coach with the University of Arkansas football team, speaks with members of the media Thursday, February 6, 2020, inside the Fred W. Smith Football Center on the campus in Fayetteville.

Arkansas coach Sam Pittman and his staff signed one prospect from New England in February, and they’re back in the region pursuing sophomore linebacker Tyler Martin.

Martin, 6-2, 235 pounds, of Buckingham Browne & Nichols High School in Cambridge, Mass., reported receiving an offer from the Razorbacks on Wednesday to go along with offers from Michigan, Nebraska, Boston College, Vanderbilt, Virginia, Syracuse and others.

While he doesn’t know Arkansas signee cornerback Khari Johnson from Suffield Academy in Connecticut personally, he’s aware of him.

“I know many kids from his school and know of him very well. Great player and great kid,” Martin said.

“For sure. He is a local guy that played in a similar prep league as I did in New England and I will definitely be reaching out to him some point soon for his input,” Martin said.

In eight games, he recorded 86 tackles, 15 tackles for loss, 2.5 sacks, 3 forced fumbles and 2 recovered fumbles. He also had 3 receiving touchdowns.

Martin was excited about the offer from Arkansas.

“It is an honor and I couldn’t be more excited,” Martin said. “A place like Arkansas is very special, and obviously being an SEC (school) it plays in the best conference in the country, so that is intriguing as well. I want to start up great relationships there and give it a serious look as my recruitment continues.”

He was surprised by the offer from the Razorbacks.

“Mainly because I am a Massachusetts kid and us New England kids sometimes get overlooked,” Martin said. “I have always believed in myself even if others didn’t. So, yes, I was surprised, but I also know I work as hard as anyone in the country and want to earn everything.”

Martin has a 3.6 grade point average and is looking to study business or sports management. He has visited several schools prior to the NCAA implementing a dead period on March 13. The dead period was extended until May 31 on Wednesday.

“I have visited schools like Michigan, Virginia, Virginia Tech, Boston College and Vanderbilt,” he said. “I was looking to take some more visits this spring, but didn’t have any set in stone.”