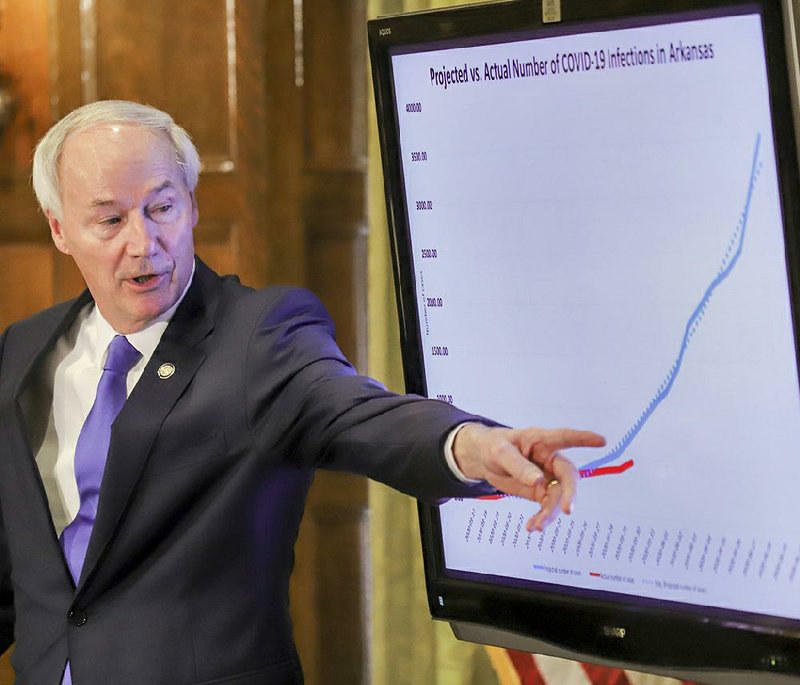 [WEDNESDAY UPDATE: The number of positive cases of covid-19 in Arkansas has risen to 566, the state Department of Health reported. Read more here » arkansasonline.com/news/2020/apr/01/watch-live-130-pm-governor-state-health-officials-/]

Gov. Asa Hutchinson said Tuesday that he would seek a major disaster declaration for Arkansas as the coronavirus claimed the life of an eighth Arkansan and the number of cases in the state rose by 56, to 564.

Hutchinson said he also directed the Department of Parks, Heritage and Tourism to recommend which state parks should be closed as a way of reducing the flow of visitors from other states with larger coronavirus outbreaks.

He said he's consulting with the National Park Service on measures that could be taken at the Buffalo National River and other federal parks.

"I've received reports that there's congregations of larger numbers of people along the Buffalo River and some of our state parks that are most popular," he said. "While you can practice social distancing there, it's not being followed sufficiently."

Since the coronavirus was first confirmed in the state on March 11, it has spread to 53 of the state's 75 counties. Sixty-four people who tested positive were hospitalized as of Tuesday afternoon, an increase of two from a day earlier.

State Department of Health Secretary Nate Smith said the latest person to die of the coronavirus was a Central Arkansas resident age 65 or older. The patient died at White River Medical Center in Batesville.

Hutchinson declared a public health emergency in the state on the day the first person tested positive, and he put the Department of Health as the lead agency in charge of the state's response.

He said a federal disaster declaration would allow the state to receive federal reimbursement for the use of Arkansas National Guard personnel, including 40 additional soldiers and airmen who Hutchinson said Tuesday he had authorized to help with plans to increase the state's hospital capacity.

Melody Daniel, a spokesman for the state Department of Public Safety's Division of Emergency Management, said such declarations typically also allow states to tap federal reimbursement for certain other costs incurred before, during and after a disaster. 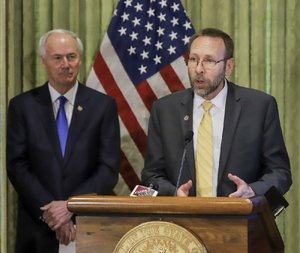 State Department of Health Secretary Nate Smith said Tuesday that coronavirus testing will be going full-speed, “and as long as we have reagents and supplies, we’ll be able to increase and optimize our testing capability.” (Arkansas Democrat-Gazette/ John Sykes Jr.)

President Donald Trump had already declared disasters stemming from the pandemic in more than two dozen states, as well as Puerto Rico, Guam and the District of Columbia.

Writing in support of Arkansas' request, the six members of the state's congressional delegation said the state faces a shortage of masks and other protective gear and that business closures have resulted in thousands of layoffs. That's in addition to the tornado that struck Jonesboro on Saturday, injuring 22 people and damaging 458 homes.

"While the state and its citizens are doing everything in their power to address this problem, we still need your help," the state's two U.S. senators and four representatives said in the letter.

The move to restrict park access came after the Arkansas Democrat-Gazette reported that the largest Buffalo National River resort has closed for a month over concerns of overcrowding.

[Video not showing up above? Click here to watch » https://www.youtube.com/watch?v=u_Np06FVNt8]

A Change.org petition with more than 3,400 signatures by Tuesday afternoon urged Hutchinson to "stop telling people to visit, and to stop crowding the river and parks in a feeble attempt at social distancing."

Hutchinson said Arkansans visiting the state's parks have been observing social-distancing guidelines, such as staying 6 feet away from each other, but that he's concerned the parks are attracting visitors from coronavirus "hot spots" in other states.

For instance, the Health Department has recommended that travelers from the states of New York, New Jersey and Connecticut; the city of New Orleans; or overseas quarantine themselves at home for 14 days.

The state has already closed park lodges, museums and exhibits and has limited camping to self-contained recreational vehicles.

Stacy Hurst, parks, heritage and travel secretary, was working with park staff on Tuesday on her recommendations, which she expects to give Hutchinson today, said department spokesman Melissa Whitfield.

To limit the spread of the virus, Hutchinson has also closed the state's public schools through at least April 17; limited restaurants to takeout, drive-thru and delivery; indefinitely closed fitness clubs, hair salons and other businesses; and limited indoor social gatherings to 10 or fewer people.

So far, he has resisted broader stay-at-home orders, such as the ones that, according to a count by The New York Times, have been issued in 30 states.

Despite the growing number of cases in Arkansas, Hutchinson on Tuesday said he's seen indications that measures he's put in place have been working.

A graph distributed to reporters at a news conference showed that the number of Arkansans who had tested positive as of Tuesday was below a projection issued last week by the University of Arkansas for Medical Sciences' College of Public Health.

That projection shows the number of cases in the state reaching 3,500 on April 10.

He said Arkansans can keep the number of cases below that projection by following the recommendations of public health officials.

Those recommendations include frequent hand-washing, staying home while sick and avoiding unnecessary trips to public places.

"If we're successful in doing that, we're going to beat what those projections are, and that's our objective because that saves lives, that gets us out of this crisis much quicker," Hutchinson said.

Arkansas' testing has been limited by a scarcity of materials and equipment amid the global epidemic, but Smith said the projections were made at a time when the state's testing capacity was even lower.

The state's efforts to test all the staff members and residents at five nursing homes where residents have been diagnosed with the virus also meant performing many tests that have come back negative, Smith said.

He said that a day earlier, the Health Department's lab had tested samples from 94 patients and that UAMS, which previously was only testing samples from about 50 patients a day, completed 83 tests.

Other test results have been coming in from commercial laboratories outside the state.

"Going forward, we are going to be doing testing in our lab 24/7," Smith said. "We have the personnel trained to do that, and as long as we have reagents and supplies, we'll be able to increase and optimize our testing capability."

He said the state will also make projections based on hospitalizations, which would likely be more accurate than using positive test results.

The cases reported as of Tuesday evening included the first ones confirmed in Miller and Scott counties.

In Pulaski County, the number of cases increased by five from the previous evening, to 103.

The biggest increase was in Crittenden County, where the cases jumped by 12, to 29.

The cases increased by seven, to 40, in Jefferson County and by three, to 61, in Cleburne County.

In other counties with at least 30 cases, the numbers remained unchanged from the previous evening.

As of Tuesday night, 23 of the state's covid-19 patients were on ventilators, according to the Health Department website.

The number of nursing home residents who had tested positive remained unchanged at 47, he said.

The number of health care workers who had tested positive increased by six, to 79.

Forty-one people who had tested positive as of Tuesday evening were listed as having recovered, meaning that at least a week had passed since they fell ill and that they hadn't had symptoms for at least three days.

Information for this article was contributed by Nyssa Kruse of the Arkansas Democrat-Gazette.