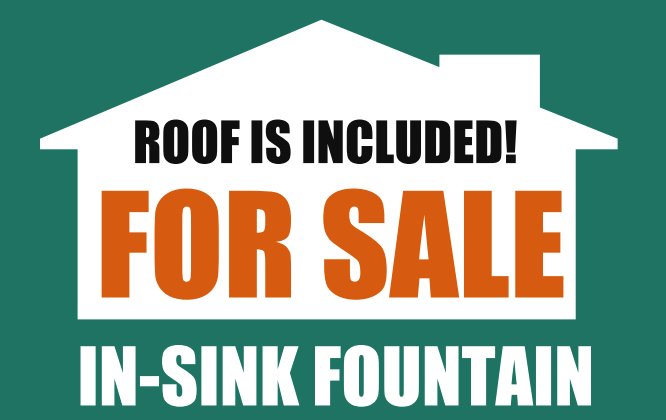 I bought a condo about a year ago, and at the time I found many amusing words and phrases in home sale listings. This week I decided to search for some more gems.

One house had "new lights," "new flooring" and "a newer furnace."

All right, we have old, then we have older, which means it has more years than simply old. But what does "newer" mean? Could it be more new than the lights and flooring? I don't think so. I think newer is a cousin of new. It resembles newness. It's new-like. Maybe it should say "newish."

One house had two "oversized bedrooms." Is this a glandular problem?

A bathroom had a "tub and shower combination." Both shower and tub? Unbelievable.

One kitchen had an "entertaining island." Who doesn't love a good show while cooking?

Another listing claimed the house "was completely reimagined to the highest standard in 2016." OK, you imagined it, but did any renovation occur?

One listing admitted that a house "could be gutted or knocked down." Well, that's at least honest.

If you're writing a listing for your house, you can't forget to include random capitalizations.

There is a Three Season Room, plus a Sun Room on the main level overlooking the back yard. Additionally, the Lower Level is carpeted and Has a sink and cabinets and a second refrigerator, and a family room/pool table area.

You have to admire a house that writes its own listing, which you must read loudly:

I AM A TWO STORY HOME WITH 2136 SQ FT TO LIVE IN. I HAVE VAULTED CEILINGS AND CEILING FANS IN EVERY ROOM.

I found a description on a couple of houses that was new to me: "She has good bones." Last I heard, houses were inanimate objects with no discernible gender. The seller wants you to be less shallow, too, and love what's below the surface. The basics are there. Don't worry about the things you see.

One real estate agent's blog revealed some truths about describing a house as "charming." She said this means the seller couldn't find a single thing to say about the place.

Similarly, I translate "cozy" as small and cramped. And "a lot of character" likely means you'll see it and say, "What were these people thinking?"

Beware of numerous clichés. Apparently, every cul-de-sac is "quiet," every swimming pool is "sparkling," and most streets are "sylvan." A family room isn't merely sunny. It's "sun-drenched." And don't forget that all "nature sounds" are "tranquil." Have these people never heard a cicada?

One listing packed in a few clichés, suggesting to me that you should run from this house.

A savvy handyman can turn this house back to a cozy home. This diamond in the rough needs some TLC, but has tons of potential.

Another said that the house had "too many extras to mention." Oh, come now. You can't mention two or three?

One $1 million-plus house had "a sunny eating area with angles." This is not enough information. Are they right angles? Acute angles? What? All right, I guess this might make me curious enough to go see.

I think that was supposed to be "tub." If you're a real estate agent and you're selling a place that expensive, wouldn't you ask someone to proofread your listing?

Just as newspaper headlines should make you want to read an article, some of the sellers go for snappy first line.

Welcome to the home of your dreams!

Are you freaking kidding me? (That might have gone too far.)

One listing offered a "peak a boo view" of Mount Hood. For one, that should be "peekaboo." But when a listing offers such a view, it usually means that if you're at least 6-foot-5 and leaning out of an attic window on a cloudless day, you might get a glimpse of the top of the mountain. Glorious.

Of course, real estate isn't the only field to exaggerate or gloss over facts. We should all remember the sage advice of "Let the buyer beware."

I saw a headline that illustrates the importance of hyphens.

Abandoned man made island in Japan.

This could be either be about a somehow-abandoned man who worked to build an island somewhere in Japan. Or that this abandoned island in Japan was man-made. I think the second sentence was the intent. Clarity is good.