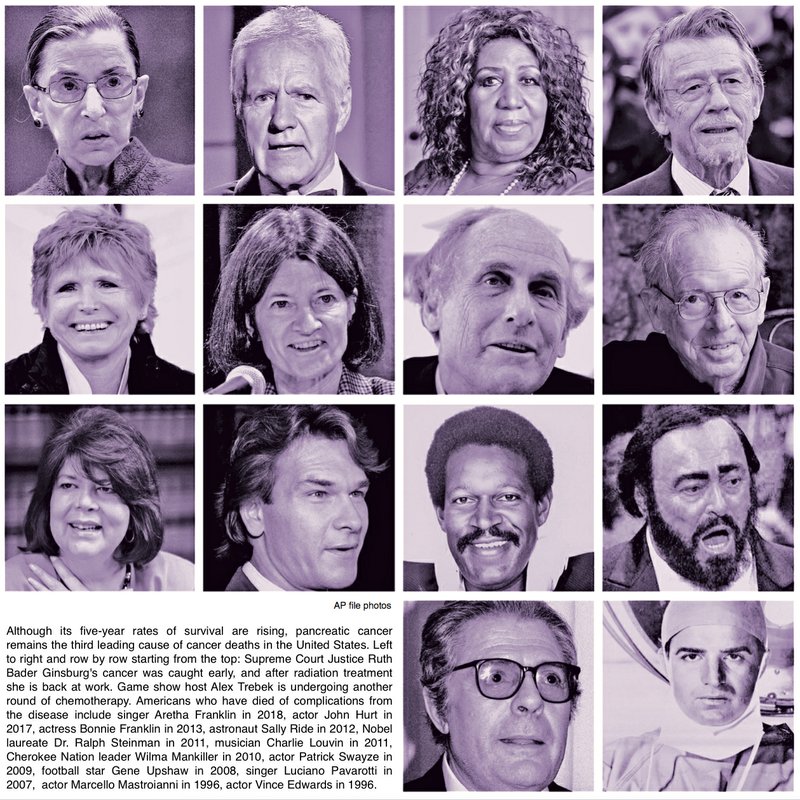 Pancreatic cancer, which will be diagnosed in about 56,770 people in the United States this year, is the only cancer with a rising mortality rate through 2014, although five-year survival has begun to inch up, to 9% by 2016, from 8%. It remains the nation's third-leading cause of cancer deaths, after cancers of the lung and colon, and it is on track to overtake colon cancer within a decade. Three-fourths of people who develop pancreatic cancer die within a year of diagnosis, and only about 1 in 10 live five years or longer.

Why has modern medicine thus far failed to gain the upper hand against pancreatic cancer despite having achieved major survival advances for more common cancers like breast and colon? What follows is a large part of the answer.

Although pancreatic cancer is a relatively uncommon malignancy, accounting for only 3% of life-threatening cancers overall, it is one of medicine's most challenging. Aside from avoiding smoking, obesity and Type 2 diabetes, there is little a person can do to prevent it, and there is no test comparable to mammography or colonoscopy to screen for it in seemingly healthy individuals when it is most amenable to cure.

Among the small minority of patients — like Supreme Court Justice Ruth Bader Ginsburg — who are cured of this disease, it is nearly always discovered accidentally at an early symptom-free stage during an unrelated medical procedure. By the time this cancer produces symptoms, it has nearly always spread beyond the pancreas. In fact, surgery is a treatment option in relatively few patients because the cancer is usually already too advanced at diagnosis for surgery to have survival value.

In August, the U.S. Preventive Services Task Force reiterated its assessment of 15 years ago that evidence is lacking for an early-detection screening tool for pancreatic cancer that can improve health and survival chances in the general population. The ability to screen for this disease in people without symptoms and known risk factors got the same dismal "D" rating, discouraging practitioners from attempting it.

Among 100,000 people of average risk, pancreatic cancer develops in only 13. By contrast, more than 4 in 100 people will develop colon cancer, and one woman in 8 who lives to age 80 will develop breast cancer.

Only those with well-established risk factors for pancreatic cancer are considered candidates for close surveillance. They include a family history of two or more first-degree relatives with the disease and the development of diabetes in a person over 50.

Pancreatic cancer has thus far resisted the screening and early detection tools that modern medicine has developed and used successfully to reduce deaths from so many other forms of cancer. Although some progress has been made in understanding the genetics of the disease and identifying possible markers in the blood, this has yet to translate into measures useful in clinical practice.

A big part of the problem with early detection lies with this vital organ's location and size. The pancreas is a source of enzymes facilitating digestion and of the hormone insulin that regulates blood sugar, making it available to tissues for energy. It is only 6 inches long sitting deep in the abdomen behind the stomach and surrounded by the spleen, liver and small intestine.

Therefore, you'd be unlikely to feel the presence of a small pancreatic tumor, and any early symptoms that might result from one, such as loss of appetite, are easily attributed to something far less ominous. Nor would you or an examining doctor be able to notice a premalignant lesion, as can happen with cancers of the cervix, colon and skin.

"The majority of cancers originate from PanINs, which measure less than 5 millimeters in diameter and can only be seen using a microscope," the authors noted. Not only can't PanIN lesions be felt, a CT (computed tomography) scan or MRI (magnetic resonance imaging) would not pick them up. The other two precursor lesions are larger but account for only about 15% of cancers.

With current technology, the Hopkins team wrote, it is often impossible to distinguish between a precursor lesion that harbors an early cancer or may develop one, and relatively harmless lesions that can be safely watched. This is an important distinction because most lesions are unlikely to progress and the surgery to remove them can be hazardous. Some progress has been made, the team noted, in using tumor markers to determine which precursor lesions are likely to become cancer.

Further complicating early detection is the speed at which pancreatic cancer seems to progress. According to Lennon and co-authors, recent study findings "suggest that early-stage pancreatic cancers often invade the veins, which drain directly to the liver and result in early metastatic spread," which may explain why only 10% of patients have localized disease at diagnosis.

Still, there remains the possibility that one or more blood tests may hold the key to early detection and a future decline in the currently horrific mortality rate. "Novel blood tests can detect a combination of pancreatic cancer DNA and pancreatic cancer-related protein markers," the researchers wrote. They noted that "in a multicenter study of 221 patients, results of a multimarker blood test helped identify 64% of patients with early pancreatic cancer," 20% of whom did not yet have symptoms of the disease.

Given that early detection can increase the chances of surviving pancreatic cancer by sixfold, the need for noninvasive biomarkers that can detect this cancer in its earliest stage is considered urgent, and organizations like the Kenner Family Research Fund in New York have been encouraging both the pharmaceutical industry and medical groups to develop them.

Meanwhile, it may help extend survival in some people if they recognize symptoms of pancreatic cancer and act on them without delay.

Possible symptoms include loss of appetite, abdominal pain that radiates to the back, new-onset diabetes in someone over 50, jaundice, itchy skin, a change in how alcohol tastes and pale odd-smelling feces that float.

Print Headline: Pancreatic cancer mortality rate remains on the rise while others fall