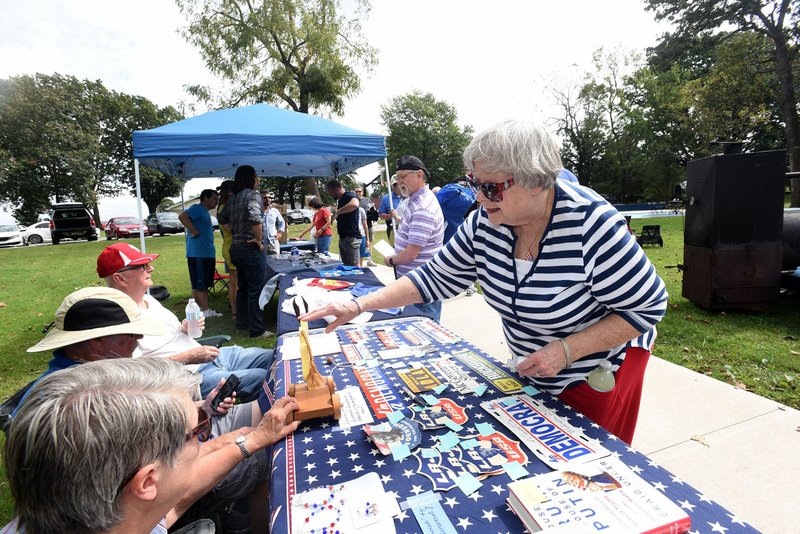 LITTLE FLOCK -- An initiated act to let state colleges and universities decide whether to allow concealed carry firearms on campus is likely to go to the 2020 ballot, an organizer of several successful ballot initiatives told a crowd of about 150 people Saturday.

"People are polling over it, and if those polls show what we expect then there will be a guns-on-campus initiated act to return local control to each college and university," said David Couch of Little Rock. He spoke to the crowd at the Little Flock picnic, an annual fundraiser and rally of the Democratic Party of Benton County.

Couch led the successful initiated campaigns for a medical marijuana legalization amendment in 2016 and a 2018 act raising the state minimum wage.

Act 562 of 2017 allows gun owners with the proper permits and extra training to carry concealed handguns onto state-run college campuses and into the state Capitol and other public buildings. Prior to Act 562, state colleges decided gun policy. None allowed guns on campus. The final version of Act 562 passed 71 to 18 in the House.

Guns rights advocate Sen. Bob Ballinger, R-Berryville, said he was disappointed Couch would attempt a repeal to overturn a law with broad public support but expects to be pleased by the result of any such election on the issue.

"I'm confident that Arkansans support gun rights," Ballinger said after Couch's announcement. "If he wants to put an issue on the ballot that will get my base turned out to vote for Republicans while upholding their Second Amendment rights, that's fine with me." The Second Amendment to the U.S. Constitution grants the right to bear arms.

In other news at the picnic, Air Force veteran Nick Jones, 38, of Centerton announced at he would run as a Democrat for the state House seat held by Rep. Dan Douglas, R-Bentonville. Douglas isn't running for re-election. Three Republicans have announced bids to replace Douglas: Scott Richardson, Delia Haak and Jorge Becker. No other Democrats but Jones have announced yet.

District 91 stretches from the western tip of Rogers to the Oklahoma border. It includes Gentry along with almost all of Highfill and Centerton, plus much of Cave Springs and parts of Bentonville. Jones is a substance abuse counselor at Ozark Guidance. Jones praised Douglas while addressing the crowd: "He has a level head and clear values. I want to continue that."

The Republican primary is set for March 3. Candidate filing for partisan offices begins at noon Nov. 4 and ends at noon Nov. 12. The general election is Nov. 3, 2020. State House members serve two-year terms and have an annual salary of $39,400.

Both the only Democrat running for the U.S. Senate so far and the Democrat's first challenger to Rep. Steve Womack, a Republican from Rogers, spoke at the event. Celeste Williams, who is running against Womack for the 3rd Congressional District seat, appealed to the crowd's patriotism.

"Every single one of my uncles and my dad signed up to serve their country in Vietnam," Williams said. "They put their country first." U.S. President Donald Trump did not when he reached out to his counterpart in the Ukraine to investigate a rival, she said. Unflinching investigation of the president's conduct is not a partisan issue but a patriotic on, she said.

The president recently released a summary of his July 25 telephone call. Womack has called the president's reference to a Democratic rival "reasonable."