DEAR HELAINE AND JOE: My 95-year-old grandmother recently passed away and we are beginning to go through her belongings and could use your knowledge. Among a house full of items is this secretary hutch/desk that is 70-by-13-by-38 inches. Are you able to help us?

DEAR L.C.: It is unfortunate but we are unable to do evaluations of large numbers of items in this space. We have to focus on just one or two specific pieces.

To begin let us say that the other items you asked about, including the lamp, cup and saucer, and china figures are not very valuable with the cup and saucer less than $15, the figures less than $35 each, and lamp less than $100. The sofa is hard to evaluate from the photos — but probably less than $150.

With all that said, the secretary hutch/desk is an antique and has a higher value. Some people call these “side-by-sides,” others call them “Larkin desks.” The latter designation is due to John D. Larkin, who founded the Larking Soap Co. in Buffalo, N.Y. in 1875. The company’s initial product was named “Sweet Home” soap.

Larkin was aided by his first salesman and brother-in-law, Elbert Hubbard, future author of the essay “A Message to Garcia” and one of the founders of the American Arts and Crafts movement. It was Hubbard’s idea to include a “premium” with Larkin’s soap.

At first these giveaways were just cards with the company logo but these soon morphed into colorful pictures that could be traded among housewives. The idea grew until a free handkerchief came with “Pure White” soap and a free bath towel with “Ocean Bath” soap.

The business was so good that Larkin fired all his salesmen and intermediaries and went into mail order. The company issued a catalog (destined to be second only to the Sears catalog) with available premiums, and business was so good that Larkin had to set up a furniture manufacturing factory in Buffalo that assembled parts cut in Tennessee. Buffalo Pottery was established to make pottery while glass, silver plated wares and men’s clothing were bought from various suppliers.

Side-by-side desks were very popular Larkin items, but there is no way to be sure this example was made by Larkin unless there is an attached label because so many other furniture companies made similar pieces. Still side-by-side units with desk, bookcase and mirror carry the Larkin name whether the soap company actually made it or not.

This unit was probably made in the 1900-1910 time-frame and is still a very useful piece of household equipment. But its popularity has greatly declined with collectors over the past decade or so. There was a time when a nice golden oak side-by-side desk/bookcase unit such as this one would have sold at auction for as much as $800.

Sadly, we are talking about 2005 with that number. Now, in 2019 similar units are selling at auction in the $175 to $300 range, which we believe is too low and could rise again in the near future.

Helaine Fendelman and Joe Rosson have written books on antiques. Do you have an item you’d like to know more about? Contact them at Joe Rosson, 2504 Seymour Ave., Knoxville, TN 37917, or email them at treasures@knology.net . If you’d like your question to be considered for their column, please include a focused, high-resolution photo of the subject with your inquiry. 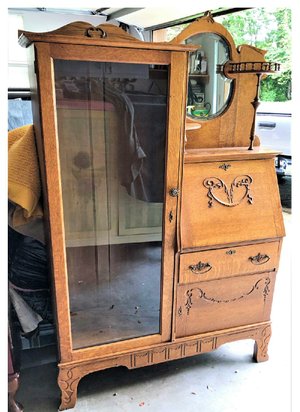 Photo by TNS
This bookcase and desk go through life side-by-side.