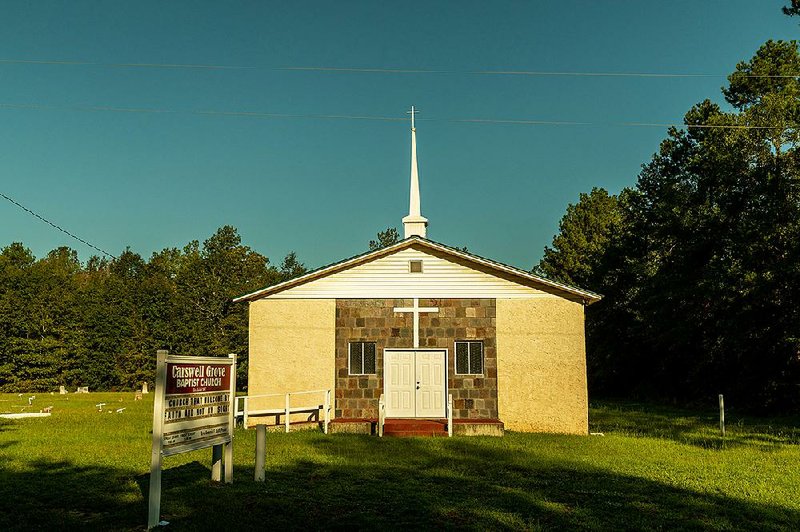 Carswell Grove Baptist Church, a Millen, Ga., black church, was burned to the ground by a lynch mob in 1919.

MILLEN, Ga. -- Around the bend of a rural road in eastern Georgia, towering pines give way to a gnatty glade dotted with aging tombstones and floral bouquets. Secluded and serene, it was the site of a horrific racial trauma.

A century ago, a white lynch mob set fire to a black church on this land just north of Millen, sending hundreds of black parents and their children scrambling out of windows in a frantic effort to escape. The mob, which was out to avenge the killing of two white law enforcement officers, would lynch at least three black males, including a 13-year-old, and leave the Carswell Grove Baptist Church in an ashy heap.

It is a little-known piece of history in a community where Southern politeness can mask racial strife. But on the centennial anniversary of the attack in 1919, efforts to acknowledge what happened have created unlikely allies.

Among those who gathered last year in advance of the anniversary to commemorate the church burning and lynchings were black residents whose ancestors were victims of the violence and members of the Sons of Confederate Veterans, an organization for those whose ancestors fought in the Confederate army.

The attack in Millen was among the first in a series of clashes across the country in one of the bloodiest -- yet largely forgotten -- seasons of racial violence in American history. From Elaine(Phillips County) and Chicago to Washington, hundreds of black people died in more than two dozen separate incidents during what is now known as the Red Summer.

Beyond the lynchings, that violent summer became notable for another tactic that white mobs used to strike at the heart of black communities: attacking churches just as they were emerging as the center of black life in America.

Carswell Grove was one of more than a dozen churches burned in three Georgia counties that summer, according to various media accounts.

Attacks on black churches continue a century later. Four years ago, Dylann Roof killed nine black churchgoers who had gathered for Bible study at the Emanuel African Methodist Episcopal Church in Charleston, S.C. This past spring, three black churches were burned in central Louisiana over 10 days. It is being investigated as a hate crime.

"The black church was the most formidable structure in the community," said Geoff Ward, associate professor of African and African-American Studies at Washington University in St. Louis who documents historical acts of racial violence. "So physically, the structure, this monument to black achievement, would have been offensive to white supremacist sensibilities. And, of course, its loss would be devastating, the memory of the burnings carried by its survivors."

Those memories in Millen have largely faded with time, as have the fortunes of the town and the church. Jenkins County, of which Millen is the seat, was hit hard when its largest employer, a Jockey underwear plant, closed more than a decade ago.

Now, the congregation has only about 15 members, not enough to fill its 30 pews. The church holds service once a month.

In Millen, most people still don't know what happened there 100 years ago.

"Supposedly in the South, we care about our heritage, but I find that there's a lot of ignorance," said Jesse Stone, a white state senator whose district includes Jenkins County.

Across the country, there are efforts to build awareness on the centennial anniversary.

In Elaine, the site of what is believed to be the deadliest Red Summer riot, residents, activists and academics gathered this year for a "truth telling" commission, and a monument built this year at Helena's Court Square Park, the Elaine Massacre Memorial, will be dedicated at 2 p.m. Sunday. Reporters have descended on the town to cover the 100th anniversary and a documentary is in the works.

Some residents and historians say that more than 200 black area residents were killed during the massacre in Elaine. Others say that number is vastly inflated. A memorial tree planted in April for the victims of the Elaine massacre was cut down last month in what some believe to be a hate crime, The Associated Press reported.

In Millen, at the chamber of commerce along a sleepy quarter-mile drag of low-slung brick buildings that make up the historic district, Mandy Underwood, the executive director, and her sister, Holly Thompson, both white, said they had not heard of the events of 1919.

They flipped through a book of Jenkins County history to an entry about Carswell Grove. It said "the church was burned as a result of a racial conflict," but made no mention of the killings. "They just glossed over it," Thompson, 63, said. "That bothers me."

When told the details of what happened, Thompson said it was an atrocity that should be known. "Some white people would be very embarrassed by something like that," she said.

Much of what is known about what happened in Millen comes from a 2012 book by Cameron McWhirter, Red Summer: The Summer of 1919 and the Awakening of Black America. According to McWhirter's book, Joe Ruffin, a wealthy black landowner, got into a dispute with two white law enforcement officers who had taken one of his friends into custody.

Ruffin was shot in the head but survived. His sons and other black residents retaliated and killed the two officers. The friend who was in police custody died in crossfire.

Word quickly spread and an angry white mob set the Carswell Grove church ablaze. They killed two of Ruffin's sons, throwing them into the burning church. It is unclear whether they were alive when they were thrown into the fire. Ruffin escaped. He was eventually acquitted of any wrongdoing in court, but he lost his land, two of his sons and his wealth. He was separated from his family and exiled to South Carolina.

"Joe Ruffin was building a kind of stable family," said Judith Fennell Ruffin, the widow of Joe Ruffin's great-grandson, John H. Ruffin Jr., who became a judge in Georgia. After the riot, "all of the stability that had been established was destroyed. Also, it took the family wealth. Then it was a sense of poverty," she said.

Palmer Lewis and his family have been members of Carswell Grove for generations; his ancestors were among those who rebuilt the church after it was burned down in 1919.

Lewis, 71, worked with the state's historical society to get a dedication marker for the site. He also enlisted the help of the local chapter of the Sons of Confederate Veterans, having been friendly with its members over the years.

"If you learn your history, you're bound not to repeat it again," said Tommy Lane, who is the commander of the Millen branch of the Sons of Confederate Veterans and attended last year's dedication ceremony.

Lane, 59, also said, when it came to racial animosity in 1919, "you had bad on both sides," a statement that echoed a contentious remark that President Donald Trump made after white supremacists clashed with counter-protesters in Charlottesville, Va., two years ago.

For Lewis, to see the church's history recognized with a permanent marker is what mattered most.

"My focus on this whole thing is a healing approach," he said. "Hopefully, that will be in some hearts, minds, on both sides." 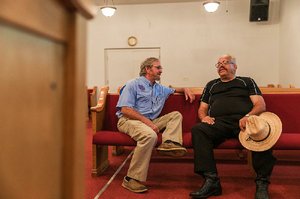 Photo by The New York Times/LYNSEY WEATHERSPOON
Tommy Lane (left), a commander in the Sons of Confederate Veterans, speaks with Palmer Lewis, a longtime parishioner at the Carswell Grove Baptist Church in Millen, Ga., on Aug. 30.