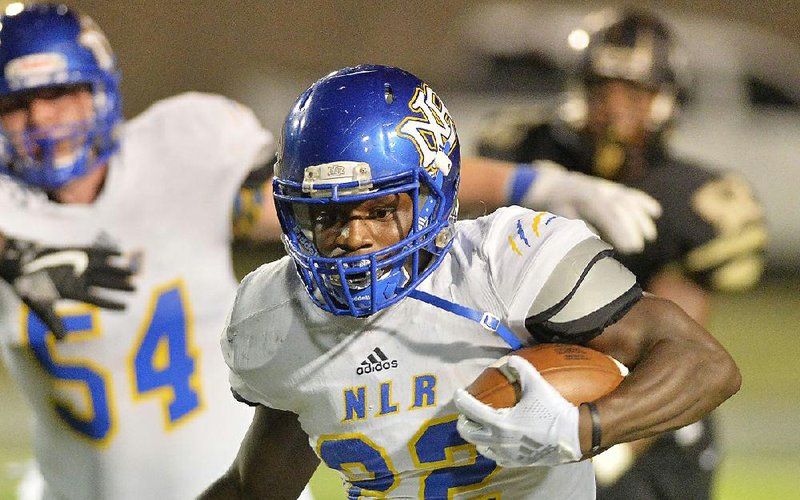 North Little Rock was not sharp Friday night, but its big-play ability was piercing enough to outlast Little Rock Central.

The Charging Wildcats scored touchdowns in three different ways to run away for a 35-21, 7A-Central Conference victory Friday night in front of a huge crowd at Quigley-Cox Stadium.

Junior running back Fredrick O'Donald scored two touchdowns, senior linebacker Abram Terry registered an interception and returned a fumble for a 23-yard score, and senior Devion Larff had a 61-yard punt return for a touchdown for North Little Rock (2-2, 1-0 7A-Central), which ran its conference winning streak to 28 games dating back to the 2015 season.

Everything wasn't rosy for the Charging Wildcats.

North Little turned the ball over four times and may be without standout running back Brandon Thomas for an extended amount of time. Thomas, a University of Memphis commitment who was making his season debut after missing the first three games because of a hand injury, carried 9 times for 130 yards and 1 touchdown before going down with an apparent left leg injury with 6:27 left in the second quarter.

"He means so much to this team," North Little Rock Coach Jamie Mitchell said of Thomas, who landed awkwardly on his ankle at the end of a 29-yard run. "He's a home-run hitter and a true difference-maker for us, and you just hate it for him. I'm hopeful that he'll be OK."

Central, which lost 38-8 to North Little Rock last year, totaled more than 350 yards of offense and had the Charging Wildcats on their heels early in the second half. But miscues at crucial junctures cost them.

"You can't make the type of mistakes that we made and expect to beat the good teams," Central Coach Kent Laster said. "We've got to cut those things out. The kids played well for the most part, played hard. But we've got to clean some things up."

Central had a first and goal at North Little Rock's 3 on its first possession, but the Tigers were turned away on four consecutive plays. The Charging Wildcats responded by driving 99 yards in 13 plays, with O'Donald sprinting in for a 21-yard touchdown, to grab a 7-0 lead.

The Tigers answered quickly as Gunn took the snap and ran untouched for a 75-yard score to tie the game at 7-7.

North Little Rock regained the advantage on Thomas' 56-yard touchdown on the Charging Wildcats' first play after Gunn's touchdown. North Little Rock's lead ballooned to 28-7 by the midway point of the second quarter after a 1-yard score from O'Donald and Larff's punt return.

The Tigers recovered a fumbled punt inside the Charging Wildcats' 10 with 2:51 left in the second and scored moments later on Gunn's 6-yard pass to senior tight end Bobbi Broadway to cut their deficit to 14. Central got the ball back shortly thereafter after an interception, and he cashed in when Gunn found junior running back Sam Franklin for a 64-yard touchdown with no time showing on the clock to climb within 28-21 at halftime.

"Just bonehead mistakes," Mitchell said of the series of turnovers. "Crazy stuff that we just cannot do. We've got to be smart with the ball because those types of things cost you games."

Terry's fumble return with 8:46 remaining in the third quarter upped the Charging Wildcats' lead to 14.

"We're 1-0 in the conference, and that's the big thing," Mitchell said. "But we've got to play better, that's the bottom line." 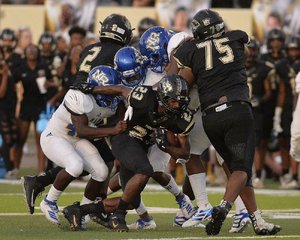 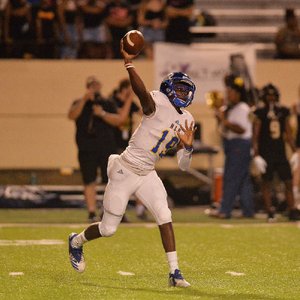