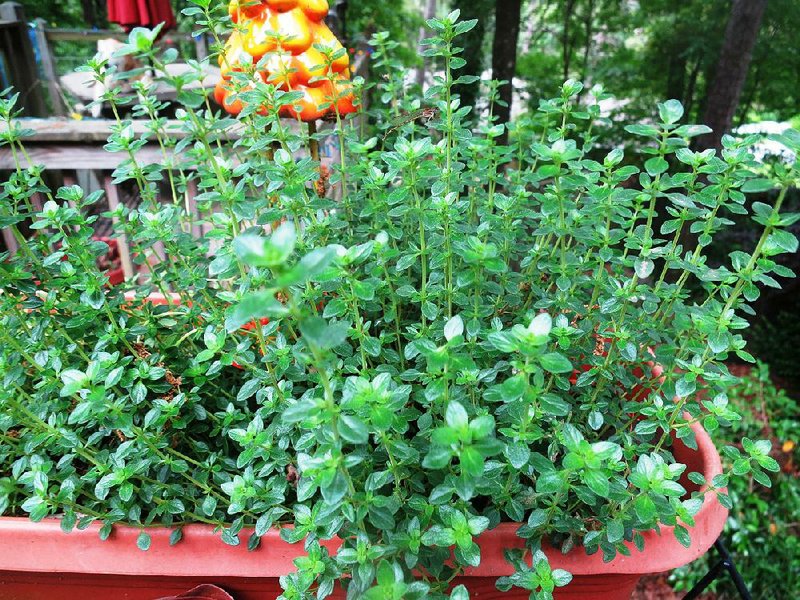 Q: I have had pretty good success with other herbs, but thyme has been a disappointment wherever I planted it. We are in Arkansas when the grass is green (Blytheville) and in west Florida along the coast in the winter. I have planted thyme in the rather heavy loam in Blytheville and in mostly sand in Florida. Both declined and did everything but die. I thought perhaps it was too wet or such tight soil in Blytheville that there was not enough air around the roots. And in Florida, I thought it was perhaps too wet, so I tried it in pots in one case with potting soil and in another with sand and a small amount of Osmocote. Same results. Basil, rosemary, oregano, Mexican tarragon have succeeded for me in both locations. What do you suggest?

A: Thyme is a plant that thrives on neglect. It likes an open, porous soil and fairly dry conditions. I had one small plant in a raised bed that gets quite dry and it is spreading like wildfire. Heavy soils would be a death sentence. In total sand, it would be hard to keep any moisture or nutrition. Don't plant it with herbs or plants that need more moisture to live because one of them won't be happy. In your sandy Florida soil, mix in a little compost, plant it and let it get dry between waterings. In Blytheville, grow it in regular potting soil, but don't overwater.

Q: I feel like all summer I've been battling aphids (these are aphids, right?) on my rose of Sharon. What can I do to prevent them or spray on them to get rid of them? I've used watered-down dish soap and, I confess, I even used liquid Sevin on the leaves (not blooms), and they've still found their way back to it. Please help.

A: They are aphids, and they do multiply quickly. Get some insecticidal soap or you can make your own with Murphy's Oil soap and water. If making your own, monitor the temperature and moisture levels before spraying. In cooler seasons, use 1 tablespoon per gallon of water, and in hot weather, try just 1 teaspoon per gallon. A strong spray of water can knock some of the aphids down. Sevin does not work because it is an insecticide for chewing insects and aphids are sucking insects.

Q: I have this apple tree that's been planted for nine years. I'm so tired of pruning and spraying with no apples. This year looked good because it had more green apples than ever, but then they all fell off or turned rotten. I think I'll get rid of it. What do you say?

A: I have said many times that growing fruit trees in a home garden is not for the meek. Fruit trees require hard work to get quality fruit. They also take their sweet time before they begin to bear, as you have learned. Since you have toughed it out for nine years and are finally getting some fruit, why throw in the towel now? Your apple trees have a fine case of cedar apple rust. Cedar apple rust is a disease with two host plants, a cedar tree and an apple tree. There is no cure once your tree gets it, but you can spray to prevent it, if you spray early. You need to spray with a fungicide such as Immunox as the buds are beginning to show color and then spray again every seven to 10 days for six weeks. This should prevent the infection. Apple trees can be more forgiving than peaches, which get brown rot. This fall, practice good sanitation, raking up all the fallen leaves. Once the tree has defoliated, spray it with a dormant oil so it can start the season out as clean as possible, and then follow the spray guide. Hope you have a bumper crop next summer. If disaster strikes again, maybe consider it a pretty flowering tree?

Q: I discovered yesterday that our two Japanese maple trees are infested with bagworms. We pulled several hundred off, but there are more we can't reach. They have destroyed a lot of foliage already, and my fear is they will kill the trees. Can you tell me what steps to take to minimize further damage or direct me to other resources/folks who can help? Also, my neighbor has what appears to be webworms in some large backyard trees that overlap with one of our trees. Is there any way to prevent those from spreading to us? What do we do if spreading does occur? Any help you can give on these topics is much appreciated.

A: Bagworms typically are more common on evergreen, needle-type plants like junipers and cedars. It is rare to find them on a Japanese maple, but I have seen it and also even on some roses. The damage will not be devastating on a deciduous plant, but do try to remove as many as possible since they do overwinter in the bags, or small sacks, that they construct. Tent caterpillars and webworms make the large nasty webs in trees. I have seen quite a few fall webworms this year, and while unattractive, they don't do much damage to large trees. If they are low enough to reach, you can remove them and destroy them, but that usually isn't the case. They have certain species they prefer, so hopefully, they won't move over to your trees. Sprays are usually not effective since the webs are up high and the insects usually are feeding within the webs.

DEAR READERS: I am putting together a group cruise for November 2020 to iconic Christmas markets along the Danube River from Budapest, Hungary to Nuremberg, Germany. The river cruise will go through Hungary, Austria and Germany, including the capital cities of Budapest and Vienna. Read details of the trip here: arkansasonline.com/928tour/. 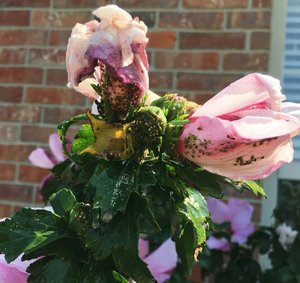 Photo by Special to the Democrat-Gazette
Aphids have infested a reader’s rose of Sharon shrub. 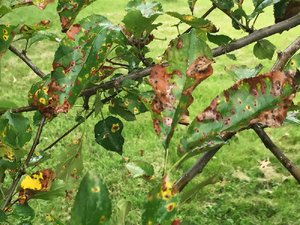 Photo by Special to the Democrat-Gazette
Cedar apple rust is a disease that needs two hosts, apple trees and cedar trees. 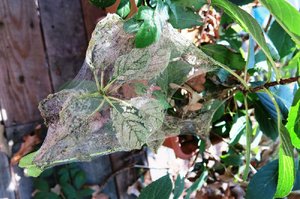 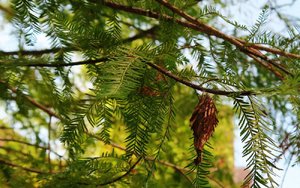 Photo by Special to the Democrat-Gazette/JANET B. CARSON
Bagworms build small sacks to protect themselves from predators.