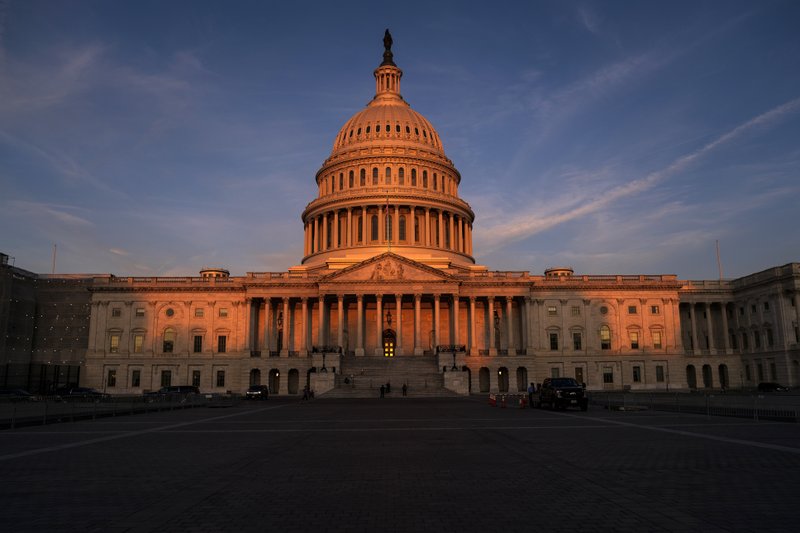 The rising sun divides the West Front of the U.S. Capitol in Washington, Wednesday morning, Sept. 25, 2019, the day after Speaker of the House Nancy Pelosi, D-Calif., declared she will launch a formal impeachment inquiry against President Donald Trump. (AP Photo/J. Scott Applewhite)

WASHINGTON -- The Senate passed a temporary governmentwide funding bill on Thursday that staves off the risk of a government shutdown through Nov. 21.

The measure would buy additional time for lawmakers to work to unclog a $1.4 trillion bundle of yearly spending bills that is hung up amid fights over President Donald Trump's border wall and abortion. Those measures face a variety of obstacles, and it's not clear whether Congress will pass them.

The bill passed by an 82-15 vote and heads to the White House for Trump's expected signature.

The stopgap funding bill came as the Senate Appropriations panel approved five spending bills, including a $71 billion homeland security measure that would give Trump his full $5 billion request to build about 200 miles of fencing along the U.S.-Mexico border.

The committee approved the homeland security measure by a 17-14 vote, with Sen. Joe Manchin of West Virginia the only Democrat in favor.

"A wall will do nothing to address the current situation at the border, where most people arriving are asylum seekers who turn themselves in," said top Appropriations Democrat, Patrick Leahy of Vermont. "But will forever change its landscape. It will cut ranches in two, rob Americans of their property, destroy sensitive lands, and threaten wildlife. This is a waste of taxpayer dollars and bad for our country."

The money faces an uphill slog and is a nonstarter with Democrats controlling the House.

Trump won $1.4 billion earlier this year through the regular budget process. He almost immediately declared a national emergency that triggered his ability to conduct a recently announced $3.6 billion transfer from military base construction. If the $5 billion is added to prior-year appropriations and various transfers from the Pentagon, Trump would have obtained almost $15 billion for the wall.

Meanwhile, the panel also approved a measure to kill a $4,500 cost-of-living pay raise that lawmakers are supposed to receive under a 1989 measure. The pay raise has been blocked since 2009. House leaders in both parties had been trying to orchestrate a maneuver to allow the pay raise to go ahead.

Rank and file lawmakers are paid $174,000 per year, but rising housing and college costs are making it more difficult for members who aren't well off to remain in Congress.