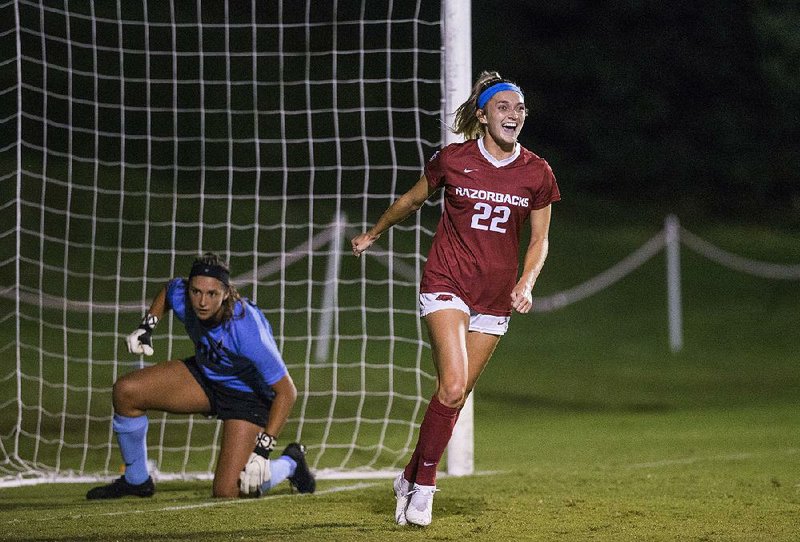 Arkansas forward Parker Goins celebrates after getting a shot past Vanderbilt goalkeeper Taiana Tolleson in the second half Thursday at Razorback Field in Fayetteville. The Razorbacks won 1-0 to improve to 8-1-1. - Photo by Ben Goff

FAYETTEVILLE -- Another ranked soccer team fell victim to the University of Arkansas on Thursday night.

The No. 13 Razorbacks defeated No. 15 Vanderbilt 1-0 at Razorback Field for their third victory over a ranked opponent in two weeks.

Parker Goins one-timed an Anna Podojil pass to the far post in the 70th minute to score the game's only goal. It was Goins' fifth goal of the season, one shy of Podojil for the team lead.

"Anna just turned and I knew she was going to get it across," Goins said. "It was good placement for me to finish it right there.

"At halftime we went in there and just talked about the first-half problems with how we played. We knew we had to come out in the second half and grind it out, and that's what we did."

Goins' goal followed a misplay by Vanderbilt defender Madiya Harriott, who headed an Arkansas entry pass backward from about 25 yards in front of the goal.

Arkansas' Tori Cannata won a one-on-one ball with Vanderbilt's Maya Antoine to gain possession on the left side. Cannata passed to Podoji, whose left-footed cross found Goins alone in front of the net on the right side.

Cannata, a senior who has 13 career goals, was playing a different position against the Commodores. Arkansas Coach Colby Hale positioned her in more of a defensive role.

"She did unbelievable," Hale said. "Tori has always been a forward, but because of the tactics today we asked her to play somewhere new, and I thought she was one of the biggest factors in the game."

Arkansas (8-1-1, 2-0-0 SEC) recorded its seventh consecutive shutout and extended its scoreless streak to 687 minutes. The Razorbacks have allowed one goal in 900 minutes of regulation this season.

Vanderbilt out-shot Arkansas 15-9, including 7-4 on goal. Razorbacks goalkeeper Katie Lund improved her save rate to .933 this season.

"Katie has been pulling off amazing saves," Goins said.

The Commodores (8-2-0, 1-1-0) didn't cross midfield until nearly 10 minutes into the game but were aggressive in the final 20 minutes before halftime. Vanderbilt had six corner kicks in the first half and four shots on goal.

Vanderbilt was averaging 2.44 goals per game, second to Arkansas among SEC teams.

"I thought the first 25 [minutes] was maybe the best we've played since I've been here," said Hale, who won his 90th game in eight seasons at Arkansas. "Then the last 20 [minutes of the first half] wasn't to our standard. We challenged them at halftime and they rose to the standard, and I thought the second half looked like an SEC game between two people trying to win the SEC. That was a fight."

The Razorbacks are scheduled to play at No. 8 South Carolina at 1 p.m. Central on Sunday.