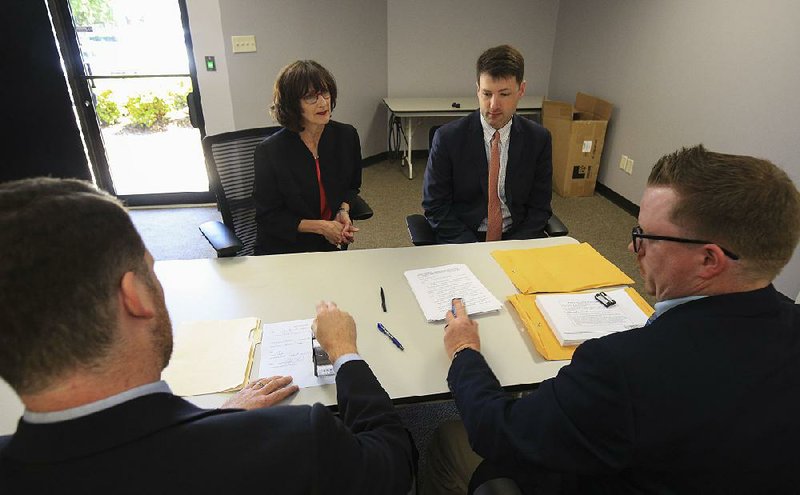 In this file photo Dr. Laurie Barber, chairman for the Safe Surgery Committee, and attorney Alex Gray turn in petitions to Brandon Newell (left), assistant director of elections, and Josh Bridges (right), election coordinator, at the secretary of state’s office.

The elections director in the secretary of state's office says a now-former office employee made an unethical and possibly illegal request regarding petitions in July, on behalf of Alex Gray, an attorney for the Safe Surgery Arkansas committee, according to the office's court filing Wednesday.

But Gray and Jason Cline, the employee who no longer works for the office, disputed the allegations of Election Director Leslie Bellamy.

The Safe Surgery Arkansas committee wants the state Supreme Court to order the secretary of state's office to place a proposed referendum on an eye-surgery law on the 2020 general election ballot. The referendum would be on Act 579 of 2019, which allows optometrists to conduct a broader variety of eye surgeries.

On Aug. 13, the committee and its chairwoman, Dr. Laurie Barber of Little Rock, asked the state's high court to order Republican Secretary of State John Thurston to place the proposed referendum on the Nov. 3, 2020, ballot.

The committee's filing came nearly two weeks after Thurston's office concluded that the committee failed to submit enough valid signatures of registered voters to qualify the proposal for the ballot.

Thurston's office had said the committee needed 53,491 valid signatures, but it had only 23,953. Committee officials reported that they turned in petitions with more than 84,000 signatures on July 23.

The Safe Surgery Arkansas committee has challenged Thurston's decision to apply another new law -- Act 376 of 2019 -- that added a filing requirement for canvassers.

Safe Surgery Arkansas said the decision disenfranchised the 61,065 legal voters who signed the petitions given to Thurston's office.

Thurston has countered in court filings that Act 376 requires paid canvassers to file, before soliciting signatures for petitions, statements swearing that they have never been convicted of certain disqualifying crimes. Thurston's office also said the law prohibits him from counting any signatures solicited by a canvasser before the filing of this sworn statement.

In an affidavit filed Wednesday by Thurston's office with the state Supreme Court, Bellamy said she received a phone call at 6:26 p.m. July 8 from Jason Cline, who worked for the secretary of state's communications and education division.

"Jason Cline asked her if we could say that the Safe Surgery Arkansas' referendum petition canvassers' affidavits 'were just found in the office, like a worker didn't know what they were, or that the affidavits were found in the Business and Commercial Services Division.'

"Jason Cline said that he was asking for attorney Alex Gray because Mr. Gray was going to lose $150,000," Bellamy said in her affidavit.

"I believe Jason Cline's request was unethical and possibly illegal," she said in her affidavit. "I informed Jason Cline that I would not commit unethical or illegal actions for anyone.

"Upon learning of Jason Cline's request, the Secretary of State's office initiated an investigation into Jason Cline's conduct, but Jason Cline resigned his employment before any action was taken," Bellamy said in her affidavit.

"These false and desperate personal attacks have no place in this litigation," Gray said in a written statement released to this newspaper. "The Secretary of State's office is clearly trying to distract from the fact that the office illegally disenfranchised more than 60,000 Arkansas voters."

Gray asked the court to deny Thurston's motion to add Bellamy's affidavit to the record because he said the proposed affidavit is irrelevant, unreliable and untrue.

Thurston's motion "seems to be an attempt to shift the focus from the legal arguments in this case and make this case about the petitioners," Gray said.

Cline said Wednesday afternoon in a text message to this newspaper, "I think my words have been completely mischaracterized.

"Somehow me asking about if these [petition canvassers'] affidavits have been misplaced or the process surrounding submission of them has been manipulated to somehow implicate me in some scheme," he wrote. "Look at the actual words in quotation marks in the affidavit -- it's me asking if these things could be misplaced."

"I certainly was in no way influenced or trying to influence anyone," Cline wrote in his text message to this newspaper.

In a brief telephone interview, he said he didn't suggest that Bellamy did anything unethical or illegal.

"This is their way of trying to drag me into something" because he "called out" the secretary of state's office for its wasteful spending, said Cline.

Asked about Cline's allegation, Thurston spokesman Chris Powell said, "We would not have a comment due to pending litigation."

He said Cline is the secretary of state's former outreach manager.

Cline said he now is a spokesman for the Arkansas Arcade committee that started collecting signatures about a month ago for a proposed constitutional amendment that would authorize coin-operated amusement machines to raise more funds for the Arkansas Scholarship Lottery.