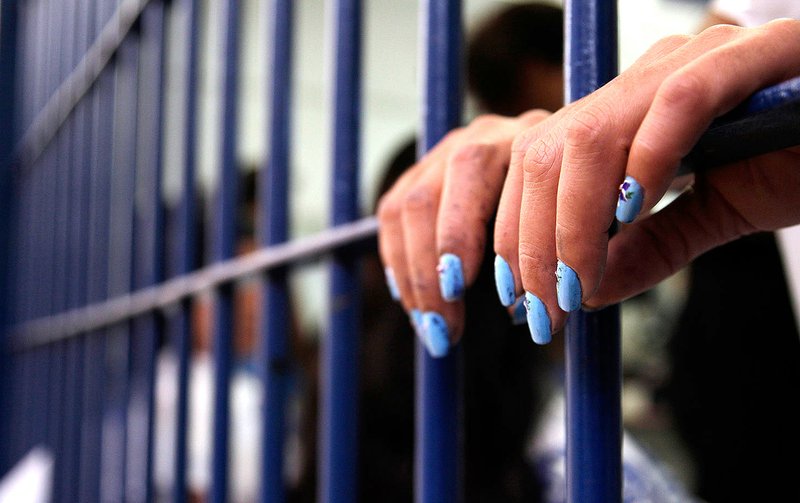 FAYETTEVILLE -- A program to reduce the number of pretrial detainees in the Washington County Detention Center has helped 25 people bond out of the jail in the past month, but the jail population hasn't declined, according to the Sheriff's Office.

"They're in here working," Maj. Randall Denzer said Friday of local representatives of The Bail Project. "They come in three or more times a week. It was kind of a slow start, but they're in here regularly now."

The Washington County Detention Center has a design capacity of about 710 beds. Requirements for separation of inmates means the jail is “full” when the number of detainees is between 80% and 90% of the total or between 570 and 640 prisoners. The center typically holds 40 to 50 inmates for the federal government or other counties. Housing those prisoners brings in about $3 million a year to the county. The jail also typically holds around 125 inmates awaiting transfer to the state Department of Correction.

The Bail Project is a New York-based nonprofit organization providing money for people unable to pay the cost of bail themselves. The organization has established a revolving fund replenished by raising money locally, according to Camilo Ramirez, communications director for the group.

When individuals resolve their legal situation -- through acquittal, conviction, a plea agreement or other arrangement -- the bail money is paid back to the fund and is used to assist others.

The jail opened in 2005 with a capacity of 710 beds, but requirements for separating detainees effectively caps the population somewhere between 570 and 640 detainees.

The Sheriff's Office has been working with the prosecutor's office and circuit court judges and releasing about 200 detainees a month for the past several months. Despite that, the number of people brought to the jail exceeds the space available by 70 to 100 people daily.

"We've still got 97 sleeping on the floor today," said Denzer, who oversees the jail. "But I guess if they hadn't provided bail, we'd have another 25."

Denzer said the Sheriff's Office provides the group with information about detainees who meet the criteria used by the organization, including bond amounts of $5,000 or less and no charges pending in other jurisdictions.

Ramirez said the group's local representatives interview detainees to determine the likelihood of the person complying with the terms of his release, including making scheduled court appearances, and provides help through reminders and transportation assistance.

The group also works with local organizations and social service agencies to provide help with housing, medical treatment and employment for those released, Ramirez said.

The initial results in Washington County mirror what the group has experienced in other areas, Ramirez said.

"It's very typical," Ramirez said. "When we first start, we're very cautious. We want to be sure we're able to support those people who are in need of additional help."

Ramirez said the group's operation in Louisville, Ky., began slowly, along the lines of the Washington County operation. The Louisville operation was able to bail out about 1,100 people the first year, Ramirez said.

Sheriff Tim Helder said the work of The Bail Project doesn't change how the jail operates.

"They provide bail for people who can't provide it themselves," Helder said. "It's no different than somebody's mom or dad coming down here and bailing them out. I have no problem with that."

Helder told the Quorum Court last year he thinks the county should expand the jail by about 600 beds. The justices of the peace asked the county to study other options before asking voters to approve a $38 million expansion and a 0.25% sales tax increase to handle the increased operating and maintenance costs of the larger facility.

Helder said he will work with people to explore other ideas and possibilities, but he remains convinced the county will need to expand the jail.

Ann Harbison, justice of the peace for District 14 in southern Washington County, said while she supports alternatives to incarceration, she doesn't believe those alternatives will solve the crowding problem. Harbison has suggested the county build a smaller jail pod capable of housing 200 misdemeanor offenders as a short-term solution while waiting to see what alternative programs can achieve.

Jon Comstock, a former circuit judge in Benton County, has been among those active in promoting alternatives to incarceration. Comstock said the work of The Bail Project is only one way of reducing the jail population. He said diversion programs, such as drug court and veterans court, should be expanded and streamlined to provide help to more people.

Comstock also said the county should explore "pre-arrest" diversion programs giving law enforcement agencies options other than arrests for people who may have committed certain types of nonviolent crimes. He pointed to the adoption of "sobering centers" in other jurisdictions to handle public intoxication offenders as one example.

"Do we really want criminal justice to be the first response for people who maybe have gone a little bit astray?" he asked.