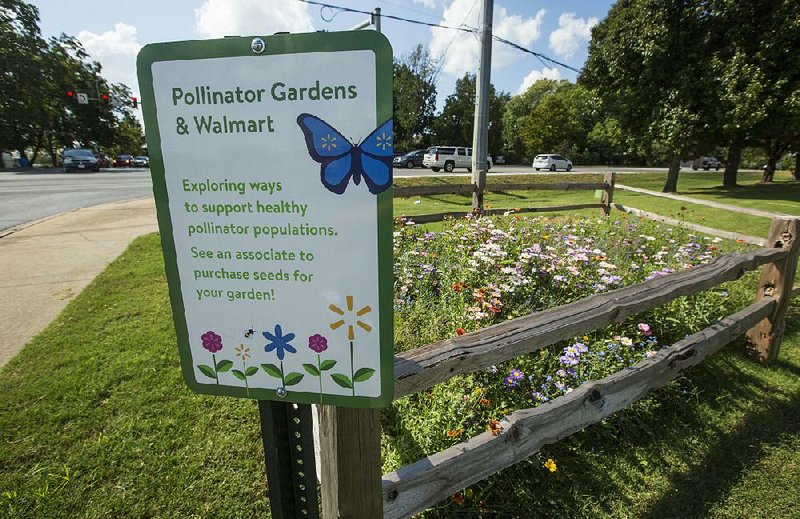 A garden planted with wildflowers attracts butterflies and other insects earlier this month at Walmart’s headquarters in Bentonville. The retailer’s pollinator garden pilot program now includes about 20 gardens around the country.

Bees and butterflies have long signified summer, putting on a delightful show as they flit from flower to flower. They do the important work of spreading pollen even as they enjoy the blossoms' sweet nectar. But the colorful pollinators have been under attack on many fronts in recent decades, causing an alarming decline in their populations.

Loss of habitat to development and cultivation, pesticides and the effects of climate change have all contributed to this downward trend, biologists say.

Walmart Inc. officials said they are working to counter that decline through a pilot program that started last spring with the planting of pollination gardens at about 20 of its stores nationwide. Walmart spokeswoman Anne Hatfield said the retailer aims to encourage other businesses, as well as its customers, to follow suit and create their own pollination gardens.

The test gardens are at Walmart stores in Oregon, Washington state and North Carolina, with an additional one at the retailer's Bentonville headquarters. They were planted in April and May, Walmart said in a recent news release. Hatfield said the company wanted the gardens to get through the growing season before announcing the pilot project this month.

"The feedback has been positive," Hatfield said. "Customers and associates like that we are adding beauty to the store and to the community, as well as increasing pollinators."

For help designing and creating the gardens, Hatfield said, Walmart collaborated with its stormwater service providers, the Environmental Protection Agency, nonprofits including the National Pollinator Garden Network and even some Walmart employees.

Besides beautifying their grounds and building goodwill within their communities, companies nationwide and in a broad range of industries have more tangible reasons to support pollinators. Amber Barnes, a wildlife conservation ecologist with the nonprofit Pollinator Partnership, said pollinators indirectly support about one in every three bites of food humans eat.

"About 90% of the world's plants need pollinators to move heavy pollens from one plant to another," Barnes said, so the future stability of the world's food and natural resources depends on them. These resources include building materials like wood as well as fibers for clothing and other uses, she said.

Also, "instituting pollinator practices can save a corporation a fair amount of money, through reduced maintenance costs," Barnes said. "Things like mowing less and applying less fertilizer, that can also be beneficial to their bottom line."

Pollinator Partnership works "in all kinds of ways" with a variety of businesses and other organizations interested in putting in pollinator habitats, Barnes said. Its efforts range from making free resources available on its website to doing personalized consultations for a fee.

"If you actually want someone to take you by the hand and walk you through the process, we do have that as well," she said.

Barnes said Pollinator Partnership has worked with such diverse companies as General Mills, The Boeing Co., The J.M. Smucker Co. and Francis Ford Coppola Winery. And recently, she said, they've worked with Suppliers Partnership for the Environment, a group of automotive manufacturers and suppliers seeking to improve environmental sustainability in the global automotive supply chain.

Although Walmart hasn't collaborated with Pollinator Partnership, another high-profile Northwest Arkansas company has. Tyson Foods Inc. of Springdale worked with the San Francisco-based nonprofit to create a monarch butterfly research station near its corporate headquarters.

Laurie Davies Adams, Pollinator Partnership's executive director, said the Tyson plots were developed "in support of the monarch migration and are being monitored to determine the best plant species to support monarch butterflies and other pollinators."

Tyson spokesman Gary Mickelson said the company helped establish the research habitat several years ago by providing some of the native plants as well as access to the area. "We know it's been active this year with monarchs and other butterflies," he said.

Barnes said the Tyson habitat is part of Pollinator Partnership's Project Wingspan initiative. Funded by a grant from the National Fish and Wildlife Foundation, the project seeks to increase habitat for monarchs and the endangered rusty patched bumble bee in an eight-state region that includes Arkansas. Biologists are working with managers of public and private lands with the goal of creating 10,000 acres of habitat for the pollinators.

Project Wingspan has brought Barnes to Northwest Arkansas -- part of the monarch butterfly's migration route -- several times. She has worked not only with Tyson but also the University of Arkansas, Fayetteville's Center for Advanced Spatial Technologies. Barnes said Brian Culpepper, a research associate at the center, helped with the project by generating a simple digital data platform and private database for volunteers' seed-collection efforts.

"Essentially, this partnership [with the center] helps us make sure we're getting the right plants back to the right places, where they can thrive and support pollinators and other wildlife," Barnes said.

An interactive map at JourneyNorth.org tracks the annual monarch migration through the United States each year, based on reported sightings along their route. In Arkansas, the number of monarchs migrating south to their winter quarters in Mexico peaks around mid-October.

Hatfield, the Walmart spokeswoman, said the gardens in the pilot program contain a mix of annuals and perennials, and their progress will be monitored next spring. She said it's too early to determine whether the program will be expanded to more stores. "We will monitor closely and see what we can learn before making any decisions," she said.

Walmart is encouraging others to plant pollinator gardens by providing plant guides in stores, Hatfield said. If shoppers see a plant they like, store employees can help them pick out the right seed. Next year, she said, stores will carry an even larger selection of wildflower seeds. 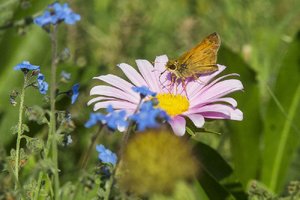 Photo by Ben Goff
An insect lights on a flower at a garden outside Walmart’s headquarters in Bentonville.