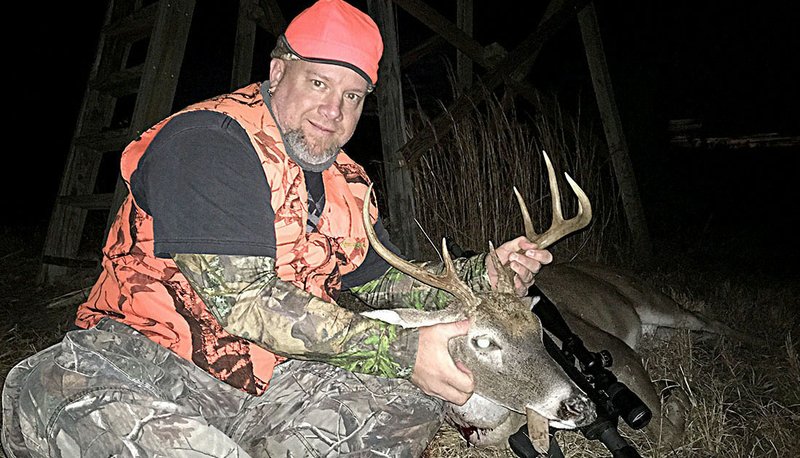 Despite the increasing presence of chronic wasting disease in Arkansas, these are still golden days to be a deer hunter in the Natural State.

In 2018, Scott Arnold of Berryville killed a Carroll County buck that scored 183 0/8 Boone and Crockett. It set the state record for the largest buck killed with archery equipment.

Doe kills have exceeded our buck kills for five consecutive seasons, partly because liberal bag limits enable a hunter to kill as many as six does in a season. As a result, herd sex ratios are beginning to equalize. Seldom do we see 20-30 does in a food plot anymore, but we expect to see mature bucks every year.

A big reason for that is the three-point rule that the Arkansas Game and Fish Commission enacted statewide in 1998. It requires a legal buck to have at least three points on one antler. This shifted the brunt of the annual deer kill from 11/2-year old bucks to at least 21/2-year old bucks. The extra year enables a greater percentage of any buck year class to survive to maturity.

Jeremy Brown, assistant deer program coordinator for the Game and Fish Commission, said it was initially a hard sell to convince deer hunters that fewer deer could translate to better deer.

"They were used to seeing large numbers of deer in social groups," Brown said. "When you stop seeing that, people think we're losing our deer when in reality, deer are more productive and healthier."

The Delta is our best region for big bodied, big antlered deer. The genetics are excellent, and the alluvial soil is mineral rich. It's also an agricultural area where hunting access -- and hunting pressure -- is limited.

"Arkansas county has a pretty good ratio of deer habitat compared to the amount of total acreage," Brown said. "It has pretty significant amounts of timber, shrubs, CRP [Conservation Reserve Program] and WRP [Wetland Reserve Program] ground. It has a lot of farm ground, but there's a good mixture. "

In the spring of 2018, an historic outbreak of buffalo gnats plagued southeast Arkansas, especially Arkansas County. The gnats are believed to have killed a significant number of deer. It happened again in 2019, but the effect is unknown.

This mountainous region encompasses steep, fairly homogeneous habitat and low deer densities within the 1.5-million acre Ozark National Forest, which extends across the vast area south of the Ozark Plateau, as well as the gentler rolling habitat atop the Ozark Plateau.

Deer densities are highest near the cities of Fayetteville, Springdale, Rogers and Bentonville. These areas serve as de facto deer refuges where deer grow old and fat on ornamental shrubbery.

This region is also part of the Chronic Wasting Disease Management Zone, where there are no antler-point restrictions and where an antlerless buck does not count against your annual limit of two bucks.

As usual, Washington County was tops in the Ozarks. Hunters checked 5,623 deer. This county was subject to CWD management regulations for the first time in 2018, and Brown said they probably contributed to a significantly higher harvest.

Washington County, which takes in part of the sprawling White Rock WMA, also produces an increasing number of big bucks. David Behl of Prairie Grove killed a 157 4/8 typical during muzzleloader season, and Charles Croom Sr. of Fayetteville killed a 150 2/8 typical with a crossbow.

Close behind was Benton County with 4,960 deer. It also was subject to CWD regulations in 2018, which helped exceed the 2017 kill rate of 4.8 deer per square mile.

"We get asked a lot about why are there some big bucks coming from that area now," Brown said. "Back in the 1980s, we didn't see high B&C scores from Northwest Arkansas. My data tells me those deer were there, but we didn't let them get old enough. The three-point rule shifted harvest to older deer."

This mountainous region running between the Arkansas River and the Gulf Coastal Plain is distinctly different from the Ozarks. Deer densities are low compared with other regions, especially within the 1.5-million acre Ouachita National Forest. Garland County led the regional harvest with 3,727 deer.

In 2018, Kathy Evatt of Mabelvale killed a 151 2/8 non-typical buck in Montgomery County. Patrick Kelley of Dover killed a 157 4/8 Yell County typical with a bow. Jason Monk of Hot Springs used a crossbow to kill the biggest buck in Garland County, a 164 0/8 non-typical.

This low, rolling area has the state's highest deer densities.

As always, Union County led the state with 6,385 deer, to the tune of 6.1 deer/acre. Cleveland and Bradley counties didn't produce as many deer, but their rates were both a whopping 8.1 deer/acre.

Grant County produced the biggest Gulf Coastal Plain buck in 2018 with a 182 3/8 non-typical taken by Jonathan Dennis of Colt during the modern gun season.

That demonstrates that a deer hunting dream can come true anywhere in Arkansas on any day. 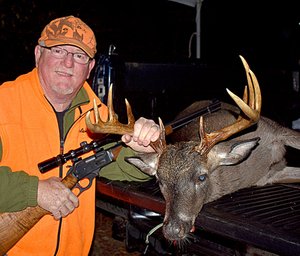 Photo by Bryan Hendricks
Because of the three-point rule and quality deer management practices, hunters like Mike Romine of Mabelvale see more mature bucks than ever. Even with the threat of chronic wasting disease, this is the golden age of deer hunting in Arkansas. 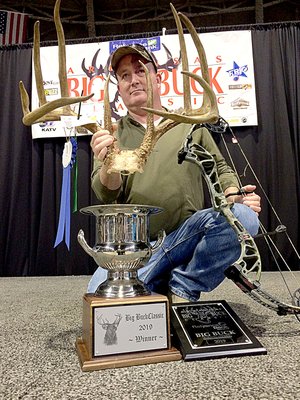 Photo by Bryan Hendricks
Arkansas has quietly become a sleeper big-buck hotspot, as evidenced by this giant non-typical killed in Carroll County in 2018 by Scott Arnold of Berryville.