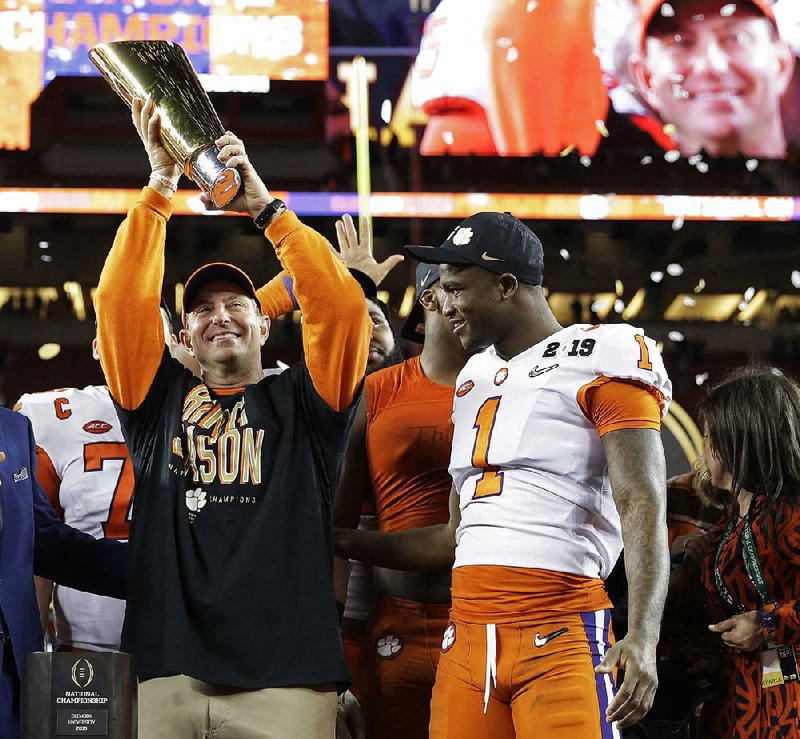 Dabo Swinney has led Clemson to national championships in two of the past three seasons. Arkansas Coach Chad Morris, who was Swinney’s offensive coordinator and quarterbacks coach in 2011-14, has a situation with the Razorbacks that is similar to the Tigers before they became a national power.

University of Arkansas Coach Chad Morris has often compared the potential of the Razorbacks football program to that of defending national champion Clemson.

Morris was the offensive coordinator and quarterbacks coach for the Tigers from 2011-14 before becoming the head coach at SMU for three seasons.

The average number of victories and 10-win seasons from 1981 to 2009 for Clemson and Arkansas are comparable, as is the number of in-state recruits each program signs.

From Clemson's national championship season of 1981 to 2009, the Tigers had five 10-win seasons, while Arkansas had four.

The one area Clemson had a sizable advantage over Arkansas from 1981-2009 is top 25 finishes. The Tigers had 15, while Arkansas had 8.

Dabo Swinney was named Clemson's interim head coach in 2008 before becoming the permanent coach in 2009. He had his first 10-win season in 2011, Morris' first year at Clemson.

Since 2011, Clemson has reeled off eight consecutive 10-win seasons and has become an elite program while winning the national championship two of the last three years.

Phil Kornblut is in his 36th year of being the host of SportsTalkSC, the longest running sports talk show in South Carolina. He's covered recruiting since 1978, and his recruiting column is carried by six newspapers in the state.

He sees the similarities in Arkansas and Clemson and believes Morris can get the Hogs on the same path of success as the Tigers.

Morris' recruitment and eventual signing of quarterback Deshaun Watson jump-started Clemson to the 2016 national championship. Watson was ESPN's No. 1 dual-threat quarterback and the No. 16 overall recruit in 2014.

"Morris knows this better than anybody, the first thing he did after they hired him is go to Gainesville, Georgia, and scout Deshaun Watson and start building that relationship when Watson was a junior," Kornblut said. "He got Watson committed as a junior and then brought him in to run the offense.

"He brought in that guy that could run his offense to perfection and that's what he's got to do at Arkansas."

Kornblut said Morris is a key reason why Clemson has turned into a national power.

"Clemson was doing some good things under Dabo," Kornblut said. "They were winning 9 to 10 games year, but they were going to the Belk Bowl, the Music City Bowl."

"Chad Morris has had a huge impact on my life," Watson said. "I still talk to him to this day. He's like a father figure for me and a coach."

Kornblut said Clemson's elite status in college football is because of Morris and Watson.

"Deshaun Watson changed everything in my opinion," Kornblut said. "He's the guy that came in with the perfect offense and with the perfect offensive coordinator and quarterback coach to make that thing fly, and then they brought in the receivers. They started going down to Florida, and they got Sammy Watkins, and they got a long list of the top receivers out of the state of Florida."

Arkansas signed what several pundits thought was one of the best group of receivers in the nation for the 2019 class. CBS Sports Network national recruiting analyst Tom Lemming rated Trey Knox and Treylon Burks 4-star plus prospects, Shamar Nash a 4-star recruit and T.Q. Jackson a 3-star plus prospect.

The Hogs signed ESPN 4-star quarterback KJ Jefferson out of Mississippi for the 2019 class and has the commitment of Morris' son, Chandler Morris, an ESPN 4-star for the 2020 class.

"The question is who is that quarterback that can run his offense and that will lead to bringing in the accompanied talent to make it happen," Kornblut said. "In today's game the hot shot quarterback attracts the hot shot receivers."

"No doubt there is a connection between the blueprint that Dabo laid at Clemson and what Coach Morris is doing at Arkansas," Coleman said. "Coach Morris was Zac's lead recruiter along with receivers coach Jeff Scott. They made making a relationship a priority. A lot of coaches say it, but Coach Morris did it."

Morris was the offensive coordinator at Tulsa when hired away by Swinney in January of 2011. He instantly started recruiting Brooks.

"He was on his way from Tulsa to Clemson and began recruiting immediately ... in the car," Coleman said.