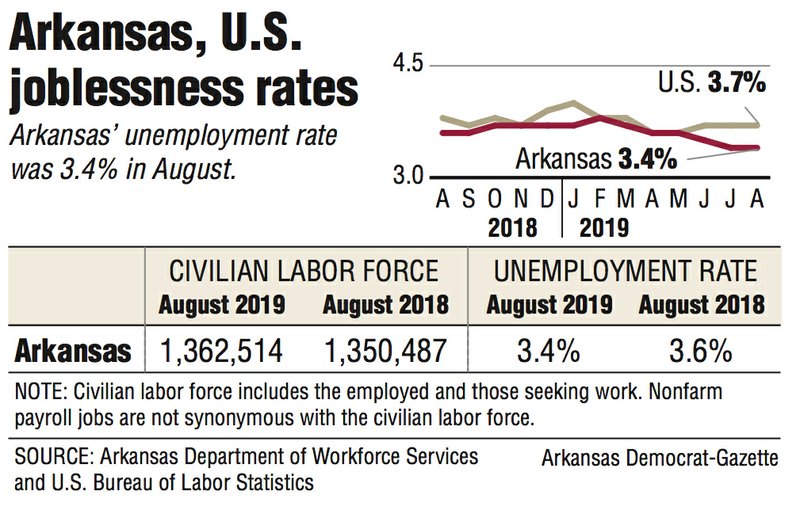 Graphs and information about the Arkansas and U.S. joblessness rates.

Arkansas' unemployment rate stood at 3.4% in August, unchanged from the month earlier and keeping the state's joblessness rate in record low territory, according to a report released Friday.

August was the fourth month in a row for record unemployment for the state. The unemployment rate is down from 3.6% for August of 2018, according to data from the U.S. Department of Labor released by the Arkansas Department of Workforce Development.

The nation's unemployment rate was 3.7% for August, unchanged from July and down from 3.8% a year earlier.

The unemployment rate for August moved lower in five states, higher in three states and unchanged in 42 states and the District of Columbia.

Vermont had the lowest unemployment rate in the nation at 2.1%. Alabama, Alaska, Illinois, Maine and New Jersey all set record lows for the month. All state statistics begin in 1976.

Alaska had the highest unemployment rate at 6.2%. There were 14 states whose unemployment rates for August were lower than the U.S. figure of 3.7%, with eight states and the District of Columbia having higher rates and 28 states with unemployment similar to the U.S rate.

Michael Pakko, chief economist at the Arkansas Economic Development Institute at the University of Arkansas at Little Rock, said he's optimistic about the state's economy and he's not seeing any sign of weakness that might hint at a coming recession.

Mervin Jebaraj, director of the Center for Business and Economic Research at the University of Arkansas, Fayetteville, said that while the low unemployment rate is a good sign, the state held steady mostly because the labor force decreased, rather than the state added jobs.

Arkansas' civilian labor force dropped by 873 in August from the month earlier, bringing the labor force numbers in the state to 1,362,514. Pakko said the drop comes after more than a year of monthly gains, calling the decrease a "blip" and "not all that significant."

Four sectors saw gains in Arkansas while six sectors lost jobs. The government sector picked up 4,000 jobs, mostly associated with schools and universities starting the school year; 2,500 jobs were added to the education and health services sector; and manufacturing saw an uptick of 1,300 jobs, with the majority of those positions in durable-goods manufacturing.

Pakko noted the gains in manufacturing wiped out several months of losses. The sector, while not anything like the employer it once was in Arkansas, had shown signs of picking up over the past few years, he said. Jebaraj also pointed out that the manufacturing sector saw modest gains and was "holding out against all odds."

The largest drop was seen in leisure and hospitality with 1,900 jobs; trade and transportation-utilities saw a loss of 1,800; and professional and business services had a decline of 1,100 jobs.

When compared with August of 2018, Arkansas' nonfarm payroll jobs were up 14,800 with seven industry sectors seeing gains of at least 1,400 jobs each, with the largest gains in leisure and hospitality and manufacturing. Employment and business services reported the larges decline in jobs at 1,200.