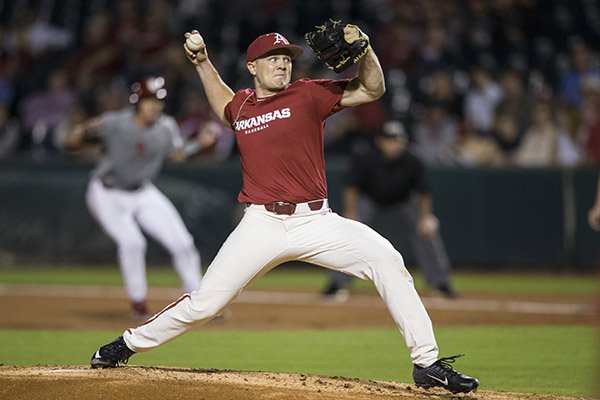 Arkansas pitcher Kole Ramage throws during a scrimmage against Oklahoma on Friday, Sept. 20, 2019, in Fayetteville. - Photo by Ben Goff

FAYETTEVILLE — The University of Arkansas baseball team, which will play Oklahoma twice during the 2020 season, got an early look at the Sooners in an exhibition game Friday night at Baum-Walker Stadium.

Fortunately for the Razorbacks, this one didn’t count on the record as the Sooners led 4-2 through nine innings, and won 4-3 after 14 innings before an announced crowd of 6,378.

Arkansas had six hits in nine innings while Oklahoma had 13.

"You have to give them (Oklahoma) a lot of credit," Arkansas coach Dave Van Horn said. "Their first six or seven arms shut us down pretty good. We just couldn’t come up with the big hit. But it was a good learning experience for our players. Some of the young guys probably get more out of this than the guys who have been around for a year or two.

"Now I think they realize everybody at this level is pretty good."

Heston Kjerstad hit a one-out triple in the bottom of the ninth inning against Jason Ruffcorn and scored on Cole Austin’s single to pull Arkansas within 4-2.

The Razorbacks got the tying runs on base when Ruffcorn hit Casey Opitz, but Ruffcorn left them stranded when he got Dominic Tomez to ground into a fielder’s choice and struck out Bryce Matthews. It was Matthews’ third strikeout.

Arkansas struck out 13 times in the first nine innings.

"We didn’t have a good night at the plate," Van Horn said.

The Sooners made it 4-1 in the ninth against Elijah Trest when Brandon Zaragoza, who went 3 for 4 with a walk, hit a two-out single to score Tyler Hardman.

Oklahoma hit three consecutive singles off Jacob Burton — with Peyton Graham driving in a run — to push its lead to 3-1 in the eighth inning.

Marshall Denton came in to pitch for Arkansas with the bases loaded, struck out Tanner Tredaway and got Kendall Pettis on a groundout to keep the margin at two runs.

Arkansas got the tying run to third base with two outs in the seventh inning and the Sooners ahead 2-1 when Opitz singled and went to third on an error by second baseman Conor McKenna, but Wyatt Olds struck out Matthews.

Oklahoma loaded the bases with one out in the seventh inning against Kole Ramage, but he got Hardman to hit into a double play to keep the Sooners’ lead at 2-1.

Arkansas pulled within 2-1 with a run in the fifth inning against Oklahoma pitcher Brad Demco when Tamez singled in Austin.

Tredaway hit the first pitch of the fifth inning for a home run over the left-field fence off Connor Noland to put Oklahoma ahead 2-0.

Noland, pitching his second inning, then got the next three batters.

Oklahoma took a 1-0 lead in the second inning against Arkansas pitcher Patrick Wicklander.

Zaragoza drew a one-out walk. After Graham lined out to left field, ninth-place hitter Carter LaValley hit a double to drive in Zaragoza.

Oklahoma put runners on first and second base to start the fourth inning against Noland when Brady Harlan beat out a bunt single and McKenna singled to left field.

Both runners advanced on Zaragoza’s groundout, but Noland kept them stranded by getting Graham on a soft liner to second baseman Jacob Nesbit and striking out LaValley.

Arkansas starter Kevin Kopps had a scoreless first inning but threw 21 pitches and left two runners on base, then was replaced by Wicklander in the second inning.

"(Kopps) didn’t throw very good," Van Horn said. "We were going to give him two innings if it went well. It didn’t go real well, just didn’t command the baseball like normal and we just went to the next guy."

Arkansas is scheduled to play Oklahoma at the Shriners Hospitals for Children College Classic in Houston on Feb. 28, 2020, and the teams are scheduled to play a midweek game in Norman, Okla. That date has not been announced.

"Those first few innings, they went with juniors and seniors and we’ll see those same guys next spring."