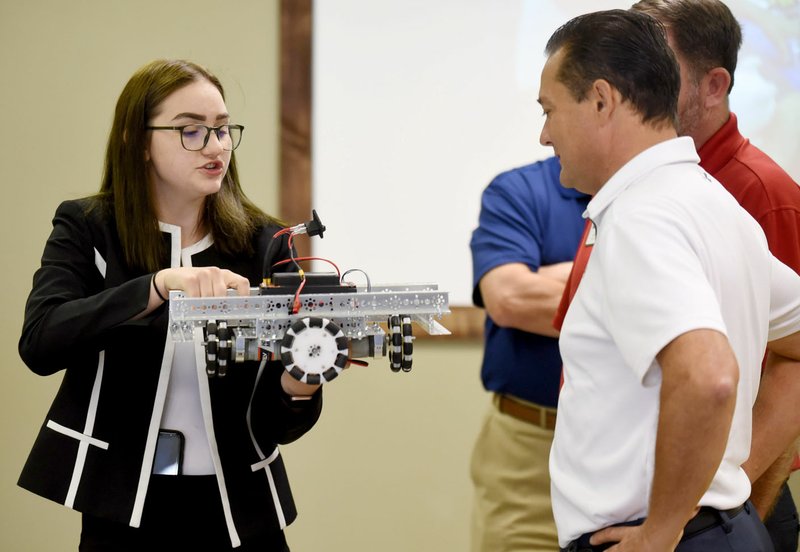 SPRINGDALE -- It was a dream come true for two teens Thursday when they cut the ribbon at the opening of the Springdale Robotics Center.

Summer Garner and Natalie Morris, seniors at the Tyson School of Innovation, came up with the idea for the center several years ago, they said.

Visit sroboticscenter.com for more information on the Springdale Robotics Center. The center is at 888 E. Robinson Ave.. The phone number is (479) 871-8537.

It's a place where kids ages 5-18 who are interested can participate in activities related to STEM -- science, technology, engineering and math -- especially robotics.

The 8,000 square-foot center contains space for robotics teams to practice maneuvering their robots. There's also a machine shop with a band saw, lathe, mill, drill press and bead blaster. Most of the equipment has been donated.

There's an area for the younger kids to tinker with Lego robots. There's also a computer linked to two 3D printers for times when students need to manufacture a particular part for their robot.

"I feel like it's something the area has been needing for a while," said Morris, 18, about the center. "Because we're trying to get more STEM, and there hasn't been an area where kids can come and let loose and just STEM."

Garner and Morris are part of a Springdale-based robotics team called Diva Force. They've competed for six years in First Tech Challenge, where teams of middle and high school-aged students design, build and program a robot to play a floor game against other teams' creations.

Garner researched about 50 sites for the center before settling on part of an office complex at 888 E. Robinson Ave. A $20,000 grant from an anonymous donor provided the money necessary to sign a lease on the space in April.

"The biggest challenge has been money," Garner said. "We've been wanting to do this for a while, but we needed to get enough money to hold down a lease. So we got that grant and we were like, finally we can do this. Our dream is happening."

Springdale First Robotics, a nonprofit organization, runs the center. Jennifer Garner, Summer's mother, serves as center director, a volunteer role. Summer and her friends are responsible for soliciting donations from other companies and foundations to keep the center going, she said.

Though its opening was Thursday, the center has been open about a month. It's usually open after school from 3-8 p.m., Jennifer Garner said, though those granted a key to the facility -- such as a robotics team -- may use it any time. The center also is available for use upon request from individuals or groups.

"The hours we're touting, that's when we'll make sure mentors are here to show you how to do something," she said. "Those hours can stretch as I get more volunteers willing to come in. But that's why we're needing more mentors, so we can have more options for having the center open."

Diana Barbosa, 16, another Diva Force member, said she's at the center a couple of times per week.

"I personally love it," Barbosa said. "We have our little game room in there for relaxing. We have our conference room, which we mostly use to plan out things. We talk to each other about anything we need to know. We also put all of our ideas together in there. If we're alone in here, we do homework. It's a really good place to get things done."

Jeff Justis, a Springdale Realtor and friend of the Garner family, worked for years with his son's robotics team. Much of the work they did was out of his basement or his garage. He called the center an "awesome" place.

"The kids can do so much here," Justis said. "As opposed to working in someone's garage, they can come here in a safe environment with mentors who can show them some new skills."