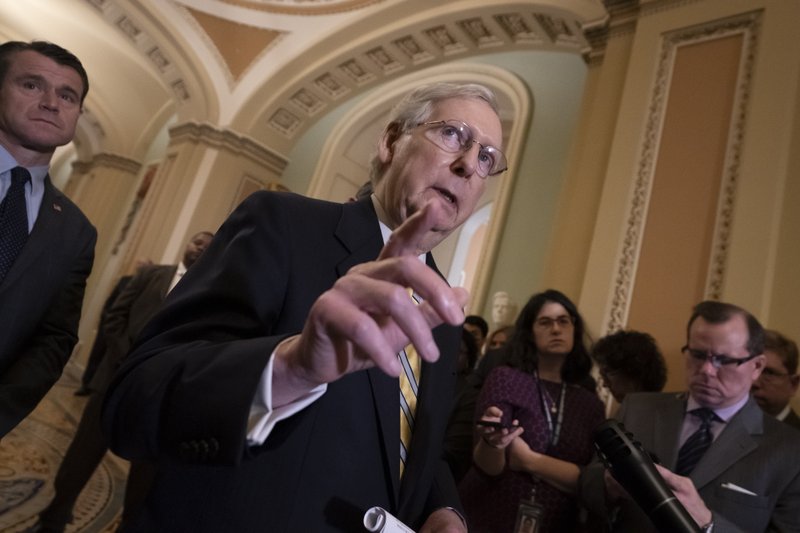 The Kentucky Republican announced in a floor speech in advance of the Appropriations Committee vote that he would support the funding, claiming President Donald Trump's administration has "made enormous strides" in protecting the nation's voting infrastructure.

Democrat Chris Coons said the funding would help states invest in updated voting systems and combat cyberattacks from foreign actors such as Russia, whose widespread efforts to boost Trump's campaign in 2016 were documented by former special counsel Robert Mueller.

"We are simply responding to what I know to be an unmet need," Coons said. "In 2016 we all know the Russian government's military intelligence branch directed extensive activity against our election infrastructure and I think there is important undone work in providing modest federal support that will make some progress in assuring that our election infrastructure is protected."

An earlier version of a spending bill that funds the Federal Election Assistance Commission did not include the money. But Leahy appeared to have GOP allies on the Appropriations panel and the committee's top Republican opted for bipartisan negotiations.

"Funding election security grants is a matter of national security, preserving our democracy, and maintaining full faith in our elections," Leahy said, calling the grants "a vital issue this committee has not funded since fiscal year 2018, despite a persistent -- and confirmed -- threat of interference in our elections by foreign adversaries."

The House has passed significantly broader election-security legislation, but McConnell opposes the measure and has discouraged the Senate Rules Committee from acting on a companion bill.

"The Trump administration has made enormous strides to help states secure their elections without giving Washington new power to push the states around," McConnell said.

Sen. Ron Wyden, D-Ore., who has been outspoken about the need for improved election security, called the proposal a "joke" and an effort by McConnell to "desperately" get the issue to go away.

"This amendment doesn't even require the funding be spent on election security -- it can go for anything related to elections," Wyden said in a statement. "Giving states taxpayer money to buy hackable, paperless machines or systems with poor cybersecurity is a waste."

"Maybe, just maybe Republicans are starting to come around to our view [that] election security is necessary, that if Americans don't believe their elections are on the up and up, woe is us as a country, as a democracy," Schumer said. "It's not all the money we have requested and doesn't include a single solitary reform that virtually everyone knows we need, but it's a start."

But Sen. James Lankford, R-Okla., said there is about $250 million in unspent funds from a $380 million appropriation for the 2018 budget year. He said oversight is needed given the loose strings on the grants to states.

Democrats say McConnell is shunning the stand-alone election-security legislation because it could be seen as a slap at Trump, who has discounted Russian interference in the election.

Information for this article was contributed by Tami Abdollah of The Associated Press.