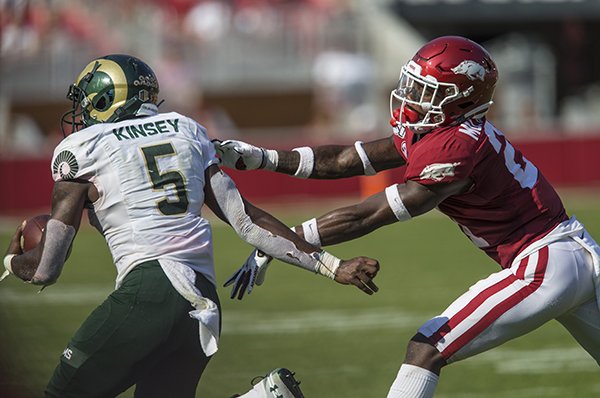 FAYETTEVILLE -- The bruising running attacks of Auburn, Mississippi State, Alabama, Kentucky and Texas A&M must be licking their chops.

Their games against the University of Arkansas are on the horizon.

If Portland State quarterback Davis Alexander can exploit the edge against the Razorbacks, and Ole Miss tailback Scottie Phillips can rack up 143 rushing yards, and Colorado State's Marvin Kinsey can ramble for 180 rushing yards on the Hogs, what damage might those formidable running teams do?

It's a legitimate question facing the Arkansas run defense, which has dealt with injuries on all three levels to an already thin unit.

The Razorbacks rank 94th in the FBS in allowing 177.3 rushing yards per game. That figure is worst in the SEC by a third of a yard behind Vanderbilt.

But before the Hogs have to deal with the likes of Mississippi State's Kylin Hill, Auburn's JaTarvious Whitlow, Missouri's Larry Rountree, Kentucky's Kavosiey Smoke and Alabama's Najee Harris, they face San Jose State on Saturday at Reynolds Razorback Stadium.

Arkansas Coach Chad Morris said Ole Miss and Colorado State both schemed to exploit Arkansas' youth at defensive end. He said the defense is working to bolster production against the run.

"We feel like we have," he said. "We definitely have in practice, just trying to get the fits right from the back end and making sure that when they do get to the edge on us that we have someone there to fit the gap."

Defensive coordinator John Chavis said the responsibility for some of the vexing runs falls on every tier of the defense, not just the ends.

Translation: the Rams had more blockers than Arkansas had defenders on some plays due to unnamed defenders not "bumping" out to the proper alignment.

"Again, that goes back to coaching," Chavis said. "We've got to be able to do those things. We felt like we did it enough in practice, but we didn't get it executed and they were able to make a couple of runs on the edge."

Colorado State rammed its way to 220 yards on the ground in last week's 55-34 loss to the Razorbacks.

Kinsey accounted for 75 of those yards, and a touchdown, on the second snap of the game.

Was Arkansas freshman end Mataio Soli held at the crease on that play? It looks like Colorado State left tackle T.J. Storment had a grip with both hands on either side of Soli's jersey as the freshman reached toward the hole with his left arm.

Arkansas middle linebacker De'Jon Harris, who stepped up in the hole and was walled off by a lineman before Kinsey cut off that blocker's back side, said that run was a "hit or miss" play with the front.

"We'll have to see tomorrow when we get in the film room," he said. "But we made the adjustments. But that's a pretty good back. They have some decent running backs and they made some plays."

Senior defensive end Gabe Richardson has been accompanied by an all-true freshman group of ends since seniors Dorian Gerald and Jamario Bell both went down in the opener. Gerald is lost for the season with an arterial issue in his neck, while Bell is expected back this week.

Freshmen Zach Williams and Collin Clay had been providing the top relief at end for position coach Steve Caldwell, but now Williams is out for at least a couple of games with a knee injury. That means another true freshman, Eric Gregory, who had a strong spring and early camp before needing minor ankle surgery, could see more playing time.

In addition to Bell adding another body to the depth chart, his veteran presence should help.

"Maturity," Chavis said. "He's played ball here. I think Coach Caldwell has done a great job with those freshmen. We've played two and a half ball games with one older guy and a bunch of freshmen.

"They're growing up, and if you associate [Colorado State] getting to the edge with those ends that wasn't the case, as I said last week. If they get outside on us that's not always the end's fault. More so than not it was more with our linebacker corps and a safety involved in getting the correct bump and how far we had to bump."

The linebacking unit might also be down a player or two this week, as weak-side starter Bumper Pool (muscle strain) and strong-side starter Hayden Henry both have left shoulder issues.

San Jose State does not present the same type of problems, statistically, that Ole Miss and Colorado State did. The Spartans are averaging 136.5 rushing yards per game to rank 95th nationally and 4.27 yards per carry to rank 75th.

Reserve quarterback Nick Nash is the team leader with 115 rushing yards and 8.8 yards per carry.

"They've got some athletes outside and they like throwing the football," Chavis said. "They've got two quarterbacks they're going to play. Their starter runs the offense and reads the secondary really well.

"He's good in the RPO [run-pass option] game and making the right decisions. They have a true freshman [Nash] that comes in and he's an athlete. He can throw the football, but he's really more of a runner. They get him involved in some option when he gets in the game. But I think the two quarterbacks and their differences, it forces you to prepare for both of them."

San Jose State Coach Brent Brennan said he hasn't decided if he'll use a two-quarterback plan against the Razorbacks.

"We're playing a really active defense with big bodies up front," Brennan said. "They can rush the passer, and they're really stout in the run game. Their linebackers really like to run and hit, and then you see some really good coverage on the back end."

Print Headline: No fun with the run: Hogs’ defense searching for answers