Kjerstad's on first for Hogs in the fall 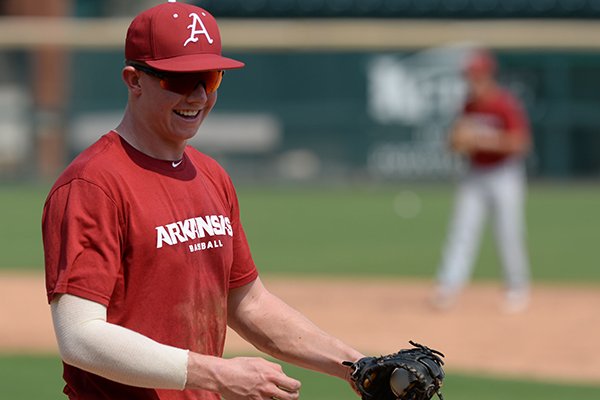 FAYETTEVILLE -- Heston Kjerstad will be at a new position for the University of Arkansas when the Razorbacks play Oklahoma in an exhibition game at 7:30 tonight in Baum-Walker Stadium.

After Kjerstad played 134 games in the outfield his first two seasons with the Razorbacks, the junior from Amarillo, Texas, is working at first base in fall practice.

WHAT Arkansas vs. Oklahoma exhibition game

"It's new to me," Kjerstad said. "I've never played there. It's a big change from fielding ground balls to fly balls, but you've just got to take your reps and get used to it.

"There are so many different plays that you have to practice. It's just a matter of getting good at all of them."

[Video not showing up above? Click here to watch » https://www.youtube.com/watch?v=3vISrTeOsXg]

Arkansas Coach Dave Van Horn began thinking about moving Kjerstad to first base after last season with the loss of senior Trevor Ezell.

Van Horn said if Kjerstad plays first base, it opens up another spot in the outfield, where the Razorbacks are well-stocked.

The move also could help Kjerstad for 2020 Major League Baseball Draft, Van Horn said, by showing that he can play the infield as well as the outfield.

"I thought it might help him a little bit financially to make him more valuable," Van Horn said. "More than anything, I just felt like it would be an option for our team that could make us better."

[Video not showing up above? Click here to watch » https://www.youtube.com/watch?v=W2dmlvnG3K0]

Kjerstad, who batted .332 as a freshman and .327 as a sophomore with a combined 31 home runs, 41 doubles and 109 runs batted in, said playing first base won't affect his offense.

"Wherever I play on the field my bat will still be there," Kjerstad said. "That's why I'm in the lineup, because I can swing it.

"That's my main priority, to hit. I'll play defense wherever I am the best I can."

Van Horn said Kjerstad has been making a good adjustment to first base.

[Video not showing up above? Click here to watch » https://www.youtube.com/watch?v=yVkJKlSTB1U]

"I talked to him about right before fall ball started -- that I'd been thinking about it all summer -- and he was all for it," Van Horn said. "His comment to me was, 'I can play the outfield in my sleep almost.' He still gets his work in the outfield, but I'd say 95% of the time he's with the infielders this fall."

Pitcher Connor Noland smiled when asked about Kjerstad, 6-3 and 200 pounds, at his new position.

"It's weird seeing that guy at first base," Noland said. "He's a big dude. So going from [the 5-8] Ezell last year to him, it's a big difference. But I like having him over there."

Joining Kjerstad in the starting lineup tonight, Van Horn said, will be Casey Opitz at catcher; Jacob Nesbit at second base; Casey Martin at shortstop; Cole Austin at third base; Christian Franklin in center field; Zack Gregory in right field; Dominic Tamez at designated hitter; and either Bryce Matthews or Curtis Washington in left field.

Braydon Webb would have started in left field, Van Horn said, but he suffered a shoulder injury making a diving catch earlier this week and will be sidelined for several days.

Matt Goodheart, who hit .345 as the Razorbacks' primary DH last season, is recovering from shoulder surgery and won't practice this fall.

Kevin Kopps will be Arkansas' starting pitcher tonight, Van Horn said, with Patrick Wicklander and Noland following him. All three would pitch up to two innings, Van Horn said, followed by pitchers going one inning with the teams planning to play 14 innings.

Van Horn also plans to use several other position players.

"We've been practicing against each other for two weeks now, so it's good to get out there and see some new faces and people that haven't seen your pitches before," Noland said. "It's good to get an opponent here like Oklahoma. They've got a good team.

"It's early in the year and facing a team like that is going to be good for us to see where we're at."

Kjerstad said he welcomes the opportunity to face another team.

"It's really exciting," he said. "We all get kind of tired of facing each other."

Kjerstad can get a feel for facing another team as a first baseman.

"I think he's taken to it well. He catches the ball well, he fields well and he's got an accurate arm. I think he kind of likes being in the infield."

Print Headline: Kjerstad's on first for Hogs in the fall