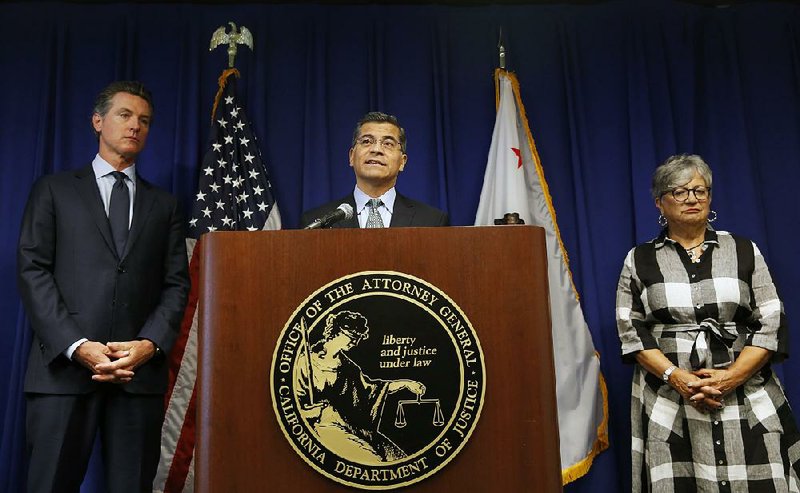 California Attorney General Xavier Becerra, center, flanked by Gov. Gavin Newsom, left, and California Air Resources Board Chair Mary Nichols, discusses the Trump administration's pledge to revoke California's authority to set vehicle emissions standards that are different than the federal standards, during a news conference in Sacramento, Calif., Wednesday, Sept. 18, 2019. “Our message to those who claim to support states’ rights is, ‘Don’t trample on ours,’” California Attorney General Xavier Becerra said Wednesday. “We cannot afford to backslide in our battle against climate change.”

Trump was in Los Angeles for a fundraiser when he tweeted about the move, saying his action would result in less expensive, safer cars. He also predicted Americans would purchase more new cars, which would result in cleaner air as older models are taken off the roads.

"The Trump administration is revoking California's Federal Waiver on emissions in order to produce far less expensive cars for the consumer, while at the same time making the cars substantially SAFER," Trump wrote in the first of three posts. He said the change would lead to increased auto production and claimed that the newer cars would be "extremely environmentally friendly."

California officials said they would sue to block the move as soon as the plan is officially published.

"Our message to those who claim to support states' rights is, 'Don't trample on ours,'" said Xavier Becerra, attorney general of California, at a Sacramento news conference about an hour after Trump's tweets. "We cannot afford to backslide in our battle against climate change."

The Trump administration is expected this morning to formally revoke California's authority to set auto emissions rules that are stricter than federal standards, taking a big step forward in the administration's wide-ranging attack on efforts to fight climate change. Andrew Wheeler, head of the Environmental Protection Agency, and Elaine Chao, the transportation secretary, are scheduled to announce the formal abolition of the waiver, one of California's signature environmental policies, at the Washington headquarters of the EPA.

A revocation of the California vehicle emissions waiver would have national significance. Tailpipe pollution is the United States' largest source of planet-warming greenhouse gas pollution, and California, with roughly 35 million vehicles, is the nation's largest auto market. California has historically set stronger pollution standards than the federal government, and many of those standards have ultimately influenced national and even international policy.

[Video not showing up above? Click here to watch » https://www.youtube.com/watch?v=huaa-ToJFjA]

The president's series of three Twitter posts sought to defend the revocation by citing specific details of the plan.

"If you look at the whole tweet thread, this is remarkably specific," said Barry Rabe, a professor of public policy at the University of Michigan. "It almost moves into policy-wonk territory. If he's doing this himself, he's on his policy game."

Still, Rabe and other experts said that Trump's assertions, while using the language of emissions policy, veered from the facts on several significant points.

Legal experts said that if Trump's move was ultimately upheld by the Supreme Court, it could permanently block states from regulating greenhouse-gas pollution from vehicles -- a major setback for efforts to control climate change. If it was struck down by the Supreme Court, it would allow states to set separate tailpipe pollution standards from those set by the federal government.

That outcome could split the United States auto market, with some states adhering to stricter pollution standards than others. For automakers, that would be a nightmare.

The move has been widely expected since the summer of last year, when the Trump administration made public its draft plan to roll back the strict federal fuel economy standards put in place by President Barack Obama's administration.

The administration's plans have been further complicated because major automakers have told the White House that they do not want such an aggressive rollback. In July, four automakers formalized their opposition to Trump's plans by signing a deal with California to comply with tighter emissions standards if the broader rollback goes through.

Trump, who was blindsided and angered by that announcement, according to two people familiar with the matter, wanted to press forward with a policy that would punish California.

The Obama-era tailpipe pollution rules that the administration hopes to weaken would require automakers to build vehicles that achieve an average fuel economy of 54.5 mpg by 2025, cutting about 6 billion tons of carbon dioxide pollution over the lifetimes of those vehicles. The proposed Trump rule would lower the requirement to about 37 mpg.

Information for this article was contributed by Coral Davenport of The New York Times and by Michael Biesecker and Adam Beam of The Associated Press.