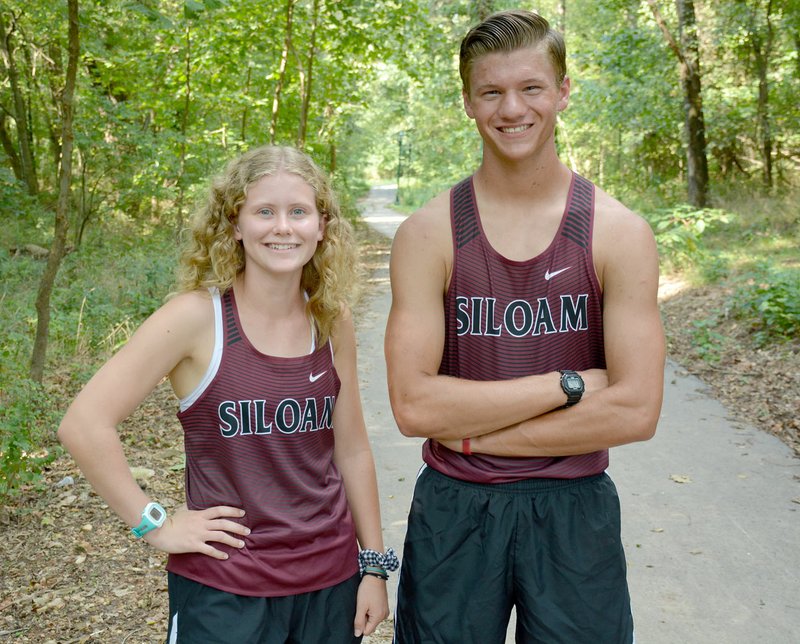 SILOAM SPRINGS -- Sharon Jones couldn't be more proud of the leadership senior runners Rebekah Rodgers and Adam Kennedy are providing to their teammates.

The last several seasons, the Panthers and Lady Panthers have had co-captains on each team to share the leadership responsibilities, but that's not the case in 2019.

"Rebekah and Adam both have so much stepped out in front of everybody else we didn't feel like we needed a backup," said Jones, the Siloam Springs cross country coach. "We always allow the kids to have a say in that. During the summer usually they set goals and we ask them to make nominations for captains and who did they think would be a good leader. And overwhelmingly, everybody said Rebekah, and everybody said Adam. There wasn't any need to have a co-captain, because they've taken that role and run with it."

The Rodgers name has been synonymous with Siloam Springs cross country.

"I think I've always had a Rodgers on my team ever since I've been here," Jones said.

Rebekah Rodgers is the latest in the long line of runners in her family, which began with older brother Jacob and older sisters Bethany and Megan.

Then there's little brother Caleb, who is a ninth-grader.

Rebekah Rodgers said her grandfather Larry Bland started it all several years ago.

"My grandpa started taking my brother (Jacob) out running with him when my brother was in middle school, because we were all home-schooled and he had too much energy," Rebekah Rodgers said. "My mom couldn't get him to listen for school. So my grandpa would come by every day on his lunch break and take Jacob out to run. Then he just got us all running with him. I started running in sixth grade."

Rebekah Rodgers moved up to the varsity team at the end of her ninth-grade year in 2016 and has been a part of three state championship teams in the Lady Panthers' string of five-straight state titles.

She acknowledges there are heavy expectations on the Lady Panthers, but she said the team can only focus on one race at a time.

"There definitely is a lot of pressure because we have won state five years in a row and we want to win again, but I'm just trying not to think about it for now," Rodgers said. "I'm just trying to focus on getting better and doing my best. I'm encouraging everyone else to do their best. Because really, state is just one race and we have to prepare ourselves for that, but we don't need to be living in the stress and the tension of that one race."

Rodgers also is counted on to be among the Lady Panthers' top runners as they seek a sixth straight state title.

She recently finished 11th overall -- and second on the team -- in the Panther Cross Country Classic with a time of 22 minutes, 39.45 seconds, just a few seconds behind teammate Quincy Efurd.

"Rebekah is expected to be in the top five and possible top three," Jones said. "She seems more focused and goal-oriented this season. Every senior wants to finish well. I expect her to have an impactful season, both on the course and off."

"Adam has stepped up during the summer time, and he told me, 'Coach I really feel like one of my biggest roles on the team this year is going to be an encourager. I want to build my teammates up,'" Jones said, "and that's exactly what he's done."

Jones said she's had good leaders in the past but never one like Kennedy. She said after a recent practice, Kennedy took it upon himself to sit his senior high teammates down and give the Panthers a critique of their recent run.

"He said, 'Guys, this is what I'm seeing, I'm loving this and I'm loving that, but man I think we can do better here,'" Jones said. "You know I've never had another kid to take that upon himself. I think he feels ownership of that team, and I think they all buy into his leadership and the style that he's bringing. It's a servant leader."

Kennedy said it's true that he is looking at his senior year from a different perspective.

Kennedy has been in the cross country program since he was in middle school. The last two seasons he's been on the Panthers' State Meet roster and was their fifth-best finisher last year at Oaklawn Park with a time of 19 minutes, 2.8 seconds.

Despite his personal success, Kennedy admitted he was struggling earlier in the year to find motivation to stick with it another year.

"I wasn't sure if I had one more season in me, because six years makes you kind of tired of it," he said. "Then I started looking around for motivation for this year, and I looked at everyone else and thought: Man, this is a great group of guys. They're awesome. I just want to do whatever I can, and part of being a senior, you see everyone and you feel like a mentor for all of them. I just really took a step back and looked at the team, and I want to be there for them as best I can and not just myself."

Kennedy recently ran a time of 20:52.99 in the Panther Cross Country Classic, finishing fifth on his team and 41st overall.

Kennedy also is one of three drum majors in the Siloam Springs High School Marching Band, which puts a heavy demand on his time.

"He's got a lot of responsibility in band," Jones said. "I respect the way he came to me and said, 'I really want to make sure I'm giving as much to both as I can.' He came at the very beginning of the summer and asked how can we make this work. A lot of kids wait until the end of the summer. ... Adam took it from the very beginning saying how can we make this work and how can we compromise with our time? He's been really good."