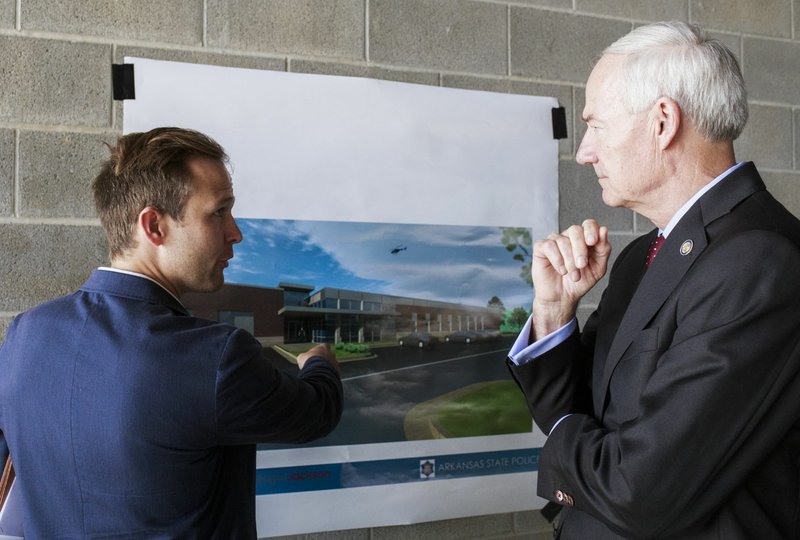 FILE — J.R. Davis and Gov. Asa Hutchinson, right, look at a picture of the Arkansas State Police headquarters in Lowell.

Gov. Asa Hutchinson's chief spokesman, J.R. Davis, will depart the governor's office at the end of this month to become senior strategist at the Gilmore Strategy Group, a political consulting and lobbying firm that includes two former aides to the governor.

The governor on Wednesday morning announced Davis' resignation as his director of communications. Hutchinson also announced that Katie Beck, who is now the governor's director of state-federal relations, will be Davis' replacement, effective Oct. 1.

Davis has been director of communications since January 2015 and was the chief spokesman for Hutchinson's 2014 gubernatorial campaign. Davis previously was the morning anchor and political reporter for an NBC affiliate in northwest Arkansas, communications director for Republican U.S. Rep. Steve Womack of Rogers, and senior political reporter for the Fox affiliate in Fort Smith.

"J.R. has been a key member of my team since the first day of my administration," the Republican governor said in a news release. "I wish him all the best as he uses his talent to pursue new opportunities in the private sector."

Beck worked for Hutchinson's 2014 campaign and has served in the governor's office since January 2015. She also has been the governor's executive assistant and liaison to the Arkansas Economic Development Commission.

"Katie has earned my complete confidence that she can handle anything that comes her way," Hutchinson said in a news release. "Katie has a background in communications, law and federal-state relations, and I have no doubt that her experience in these areas will be an incredible asset as my new communications director."

Gilmore said Davis will focus on the Gilmore Strategy Group's political practice and expanding its practice in communications for the next year.

Under state law, an individual employed in the offices of the governor, lieutenant governor, secretary of state, attorney general, treasurer, auditor or commissioner of state lands is prohibited from registering as a lobbyist until one year after the expiration of his or her employment in that capacity, according to the Arkansas Ethics Commission.

Davis said in an interview that he doesn't know whether he will register as a lobbyist once he completes a year with the Gilmore Strategy Group.

He said he plans to focus on corporate and candidates' communications and elections in the next year.

"My desire is to really focus on the communications side," Davis said.

Gilmore is Hutchinson's chief political strategist and is the governor's former deputy chief of staff. His partner in the Gilmore Strategy Group is Rett Hatcher, a former director of legislative and agency affairs for the governor and a former deputy director at the Arkansas Teacher Retirement System.

Both Gilmore and Hatcher are registered lobbyists, according to the secretary of state's website.