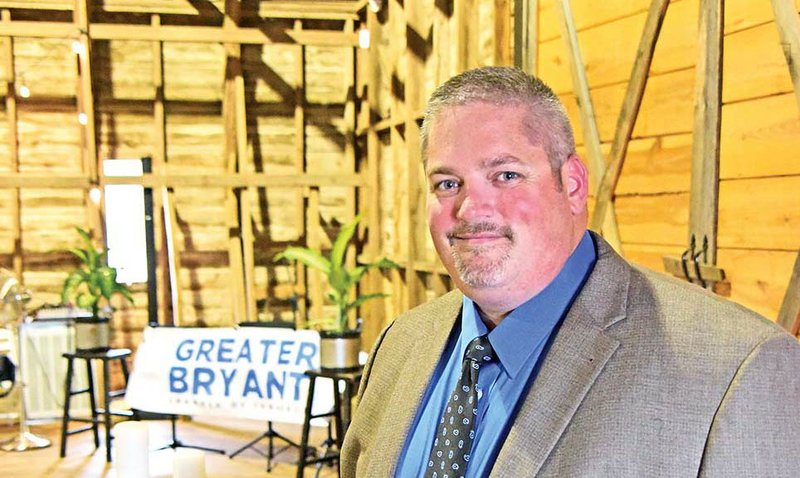 Jason Brown, the president and CEO of the Greater Bryant Chamber of Commerce, is shown in this file photo.

BRYANT -- Bryant City Council members decided Tuesday to give themselves final review of requests for the advertising and promotions money left over after the Advertising and Promotion Commission disbanded last month.

The measure passed with the understanding that the Bryant School District will receive $20,000 if it hosts the state basketball tournament and that $15,000 will fund advertising for the annual Greater Bryant Chamber of Commerce Fall Fest.

Any request for more than $50,000 will require a public workshop and an extra month before the City Council considers the request, the ordinance states.

"I hope the council can disperse the A&P [advertising and promotions] funds soon," said Brenda Miller, a City Council member.

She went on to list several events and improvements she thought would benefit the city, such as improving the Fall Fest and adding parking lot lights or a pavilion at Bishop Park.

But council member Carlton Billingsley said he opposed the measure because there were too many ambiguities in what should be done.

He asked whether there were other cities that had gone through similar processes or if the city should ask for an opinion from the Arkansas attorney general.

"The answer was no and that we will cross this bridge when we get there," Billingsley said.

He also expressed concern during the meeting that local businesses that paid the tax after Aug. 1 might run into problems with the state government because the city had returned the money to each business.

But City Attorney Josh Farmer assured members that he didn't think that money would pose any problems.

The council voted to get rid of the seven-member Advertising and Promotion Commission on Aug. 8 after it agreed to spend $624,000 on a 3-acre plot of land, said Mayor Allen Scott. The council's ordinance also repealed the tax.

"There were citizens and council members who just didn't feel it was the right use of the money," Scott said of the purchase.

He added that plans to help advertise for the Fall Fest increased the urgency of Tuesday's meeting, which was a special meeting planned outside of regular City Council gatherings.

"That's why we kind of needed to do this tonight," Scott said.

Jason Brown, the president and CEO of the Greater Bryant Chamber of Commerce, said his group is using the $15,000 to put up billboards advertising Fall Fest and to add inflatables at KidsLand, the section of the festival set aside for children.

"We're spending way more [on advertising] than we usually have," Brown said.