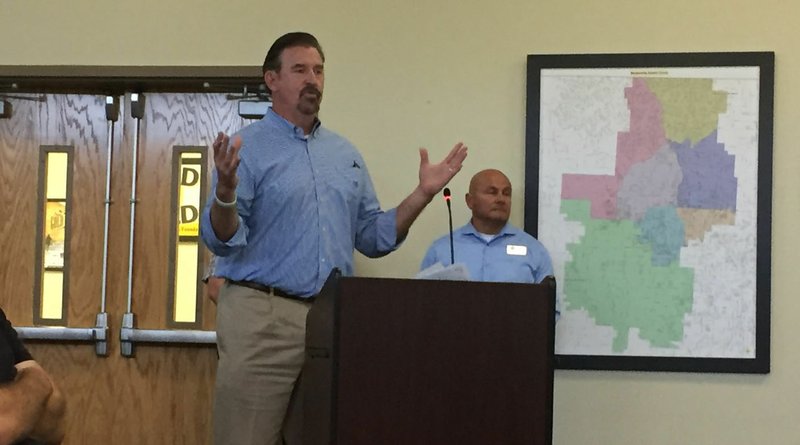 NWA Democrat-Gazette/DAVE PEROZEK Lou Rhuda, president of the Lochmoor Club Property Owners Association, addresses the Bentonville School Board on Tuesday during a meeting called to request reinstatement of bus service to the subdivision.

BENTONVILLE -- A split vote by the School Board resulted in disappointment Tuesday for one subdivision seeking reinstatement of school bus service to their neighborhood.

Lochmoor Club residents called a special board meeting to appeal the School District administration's decision to eliminate busing for elementary, middle and junior high students in the subdivision starting this school year.

The Bentonville School Board, on the motion to restore busing to the Lochmoor Club subdivision for the rest of the 2019-20 school year:

State law allows residents to call a special board meeting if they gather signatures of at least 50 qualified electors of the school district.

Matt Burgess, board vice president and a Lochmoor Club resident, made a motion to provide at least one bus for each school for the remainder of the school year. The vote at the end of the nearly 90-minute meeting was a 3-3 tie, which amounts to a failed motion.

Brent Leas was the only board member who didn't vote. Leas was out of town but participated in the meeting via phone. He wasn't allowed to vote because the district's presentation on the matter was not made available online, said Eric White, board president.

"It's simply parliamentary procedure and Arkansas law," White said. "(Leas) wasn't privy to the same set of facts we were."

Leas said he was disappointed he couldn't vote, adding he probably would have voted for the motion to restore bus service.

Bentonville transports a higher percentage of its students than any of Northwest Arkansas' big districts and runs a total of 458 routes per day, Ross said.

"As with any area of district operations, we work hard to find the right balance between service and efficiency," she said.

Rhuda, speaking after the meeting, said he respected the board members for asking good questions, but said they didn't get the right data and didn't get it on time from administrators. Residents plan to ask for another board vote and may pursue legal action, he said.

There are 132 students in Lochmoor Club who attend either Willowbrook Elementary School, Bright Field Middle School or Fulbright Junior High School; about half were riding the bus last month before the district eliminated the option, according to the district.

The district typically does not provide transportation for students who live within a mile of their zoned school. Most addresses within Lochmoor Club are a little more than a mile from the schools.

Lochmoor Club residents have expressed concerns about the safety of their students when walking or biking to school. Their only route is through a developing neighborhood with many homes under construction. Walkers must cross the street several times to stay on a sidewalk.

Residents didn't learn about the decision to eliminate their busing until a week before school started. Administrators acknowledged they failed to communicate the decision in a reasonable amount of time.

Board member Travis Riggs questioned the wisdom of the board wading into the "minutiae" of the district and interfering with decisions better left to administrators. He voted against the motion.

"I think we got to trust our administration to apply common sense, to apply logic, do the best they can to service the students," Riggs said. "And we know we're never going to make everybody happy. That's just a fact of life."

The board held its regular meeting Tuesday following the special meeting. Board members voted unanimously to name the fourth junior high school "Grimsley Junior High School" after the late Rex Grimsley, who was a rancher and businessman in Benton County.

The school is under construction and is scheduled to open next August at the corner of North Vaughn and Holloway roads in Centerton.

The district bought the 80 acres on which the junior high is being built from Grimsley's family for $1.4 million in 2017. That price included a $1 million discount from the family.

The district solicited name suggestions from the community for the past month. It received 258 submissions, according to district spokeswoman Leslee Wright.