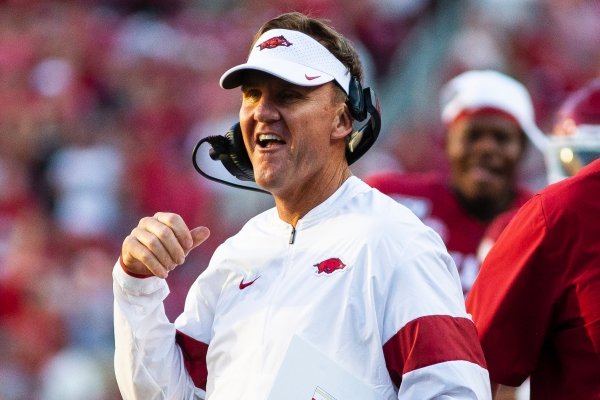 Arkansas coach Chad Morris is shown during a game against Colorado State on Saturday, Sept. 14, 2019, in Fayetteville. - Photo by David Beach

• Myron Cunningham is listed as the backup at left and right tackle after starting at right guard against Colorado State. Ricky Stromberg is down as the first team right guard.

• Bumper Pool, who was injured in Saturday's game and returned to the sideline in a sling, is still listed as the starter at WILL. We're hoping to get more of an update on his status from Chad Morris shortly.

• Morris opens by congratulating and shouting out the women's soccer team for its win over No. 1 North Carolina on Sunday afternoon.

• Seeing the excitement from our players and fans Saturday night was great. Our guys responded the way I thought they would. We had probably our best week of practice last week, and it's a credit to our players and staff.

• There was a decision that had to be made Saturday when the game was tied 34-34. It was a defining moment for this program and where we're headed. Everyone met the challenge and pulled together. How we finished strong in the fourth quarter is something we'll build on. Very pleased with that.

• Nick Starkel and Ty Clary were the offensive players of the game. Clary played his best game since we've been here. He's made a commitment and dedicated himself since conditioning and spring ball. Best we've executed offensively, and we were balanced. We averaged 7.6 yards on 33 first-down plays. We were also very productive on third down. We were 50 percent on third down. There's a lot to improve on.

• Defensively, Scoota Harris was our player of the game. He and Sosa Agim rallied everyone. Harris got everyone together and said this isn't happening again, we're not losing. To have him in that leadership role in that point was big. Disappointed in a few big plays, but the guys responded in the run game after a rough start. We continue to play good third down defense. Colorado State was 4-of-14 and we had two turnovers. Sosa turned the play back inside before Hayden Henry made a big hit and forced a fumble that LaDarrius Bishop scored on. Our leadership continues to play consistent.

• Connor Limpert and Grant Morgan were special teams player of the game. Morgan was a force all game long, and Limpert provided a momentum swing with his field goals, especially the 54-yarder. Sam Loy punted the ball well. I think he had 4.3-second hang time. He gives us a chance to get down the field and cover punts. Limpert was SEC special teams player of the week, too.

• It was one game. It was a big game for us, but they're all big games. San Jose State is coming off a bye week, and we will see their best. Their coach is well-respected. They return 10 starters. I'm far more concerned about how we play than who we play. We have to get better. Guys did a good job last night when they got back in here.

• Offensive line rotation, we wanted to keep guys fresh. Ricky Stromberg played well again. He's played well two games in a row. We had to get some guys some breathers to be ready to go for the fourth quarter.

• More on Stromberg: He plays with a great balance and he's very athletic. Moves well and adjusts and redirects. He does a good job in pass protection and he has a mean streak to him. That's really why he's playing as well as he is. The moment is not too big for him.

• On Clary: Last winter as we visited with players, it was time for him to mature and step up. He's got a lot of snaps underneath him. He's grown his knowledge of the game. The way he's trained, he's serious about it and is a more mature player. I saw it in the summer in the weight room. He is encouraging guys.

• Bumper Pool: He is day-to-day with a clavicle sprain. When it first happened, his adrenaline was going. After it wore off, he felt it a little bit. ... I thought Henry and D'Vone McClure played well, as did Morgan. Montaric Brown had a muscle strain, but don't see it being a problem this week.

• I thought we were clicking and in sync on offense, we had a rhythm. We want to play fast and continue to play fast. You don't want to go fast and go 3-and-out either. When you're efficient on first down, you can be more in control offensively.

• Hayden Henry plays with a relentless pursuit to the ball. He knows one speed and it's wide open. He has no fear of contact. He just wants to go play ball. That's what you love in a linebacker.

• Limpert has short-term memory. As a kicker, you can't play without that. I never hesitated sending him out for that 54-yard kick. He's been there before. He has confidence in himself. I was able to see that in his kickoffs, too.

• Vibe around the program: Our guys, it had to take some mental and physical toughness to win Saturday. We had to go do it. We've trained for it and prepared for it, and at some point you have to go do it. No one flinched, we were aggressive offensively. It just takes one, and then they start adding up. Everyone just feeds off each other. Winning the game is important, but how we won it is far more important to me.

• On San Jose State coach Brent Brennan: We know each other from some clinics together. We're far more worried about us. We have to get better. We have a lot of ball left and a lot of season to play. Brennan is a very well-respected coach and he'll have them ready to go. He's very well-respected.

• Myron Cunningham: He has played well, but we feel like our best lineup will be him giving relief to guys at the tackle spots. With Ricky playing so well right now, that's our plan. We like this group.

• We anticipate Jamario Bell being back this week. Zach Williams will likely be out a couple of weeks. We hope to have him back for the bye week.

• On his dance moves: When you win, you get to practice dancing. Hopefully my moves will improve. It's fun to go in there and see the guys excited. They need to see me excited, too. We want to continue to get into Club Dub.

• Nick has great confidence in his arm, and he should. He sees coverages very well. He has the freedom to get the ball to whoever he needs to.

• We anticipate Jordan Jones trying to get back out this week.

• I'm never going to get used to giving up 400 yards of offense. Two plays accounted for about 160 yards, and that's totally unacceptable. We didn't make those plays and I take responsibility for it. We had three takeaways, but one was taken away because of a penalty. We had seven 3-and-outs.

• We have to play with some attitude. One guy in particular took over our defense in the fourth quarter. It shows the growth of this team. On the sideline, our guys were going to go win the game, you could tell. I'm excited about that. We could have played better. Colorado State played well and Mike Bobo, I have great respect for him. I'm happy with how we responded.

• On Henry: I think we had several people who made really good plays. I've been high on Hayden since I've been here. He's got ability to play either the strong or weak side. He's a hard-nosed football player. We need more of that toughness. I'll take him all day, every day.

• There were a couple times we didn't make plays on the edge. They made a five-man surface on us a couple of times. It goes back to coaching, and we have to be able to do those things. We didn't get it executed and they made a few runs on the edge.

• On the linebackers: I feel good about this group if Bumper has to miss time. He's played well for us and I hope he's ready to go, but if not, it's next man up. We're not going to make excuses. I'm paid to get the next guy ready.

• San Jose State: They have some athletes on the outside and they like to throw the football. The QB is good in the RPO game. They run a little bit of option. We'll prepare for both quarterbacks.

• On Mataio Soli: He plays hard for us. He's got a big ole ball on his hand and it's hard to get off blocks, but he just goes about his business. He doesn't complain about it. No doubt he's going to be an outstanding football player for us.

• On LaDarrius Bishop: Other than making some keys mistakes, everybody played well. On the second play of the game, you don't like giving up plays like that, but we had guys who should have made the play. You have to move past that play and respond. We're going to play with what we've got.

• The biggest thing for me was the way we finished the game. It was very good to see us get over the hump and win the game. Last year, we played good offensively, but didn't finish. That was a big talking point throughout the week. If we get up on these guys, let's finish it.

• First down: We threw the ball well there and pushed it downfield. We kind of softened them up early and it opened up running lanes inside. Pretty simple in the run game and they didn't make many adjustments, so we kept hitting it and had a good day.

• Starkel: He's very talented and has a tremendous arm. We have to eliminate some mistakes. There's some things in this offense he can do better. I want him to be an elite player for us. He played great, pushed the ball downfield and hit his playmakers. He had a good game, as we expected. But we want to continue to make him better and ultimately one of the best quarterbacks to come through here.

• Myron we feel like has done an OK job at guard, but he is a tackle. You look out there, Dalton Wagner and Colton Jackson played well until they wore down a bit, so we're going to use him to keep them fresh. With Ricky playing well and Austin Capps back we're able to do that and have him as a backup.

• We give our quarterbacks option in the red zone. It was a good job by Nick finding Trey Knox on the touchdown. Nick signals sometimes to guys and gives them some freedom.

• On Limpert: I sent Connor a text on Saturday night and told him that 54-yarder was big time. I was a doubter. I didn't think he'd hit it, but it went all the way back to the Hog Pen. Jack Lindsey said he knew it was good from the moment the ball left his foot.

• It's good to see our freshman receivers go up and make some plays. They had to grow up quickly, and they're going to be tremendous players for us. Hopefully we can roll their play into the next few weeks and when SEC play comes.

• It seems like toward the end of games, the offensive line tends to get kind of gassed. With Myron coming in to spell those guys, it'll be good to give them a breather. Austin Capps coming off his injury, he did some good things. He's continuing to get better. He's only been doing guard for about a year now. The more practice and reps he gets the better he's going to be.