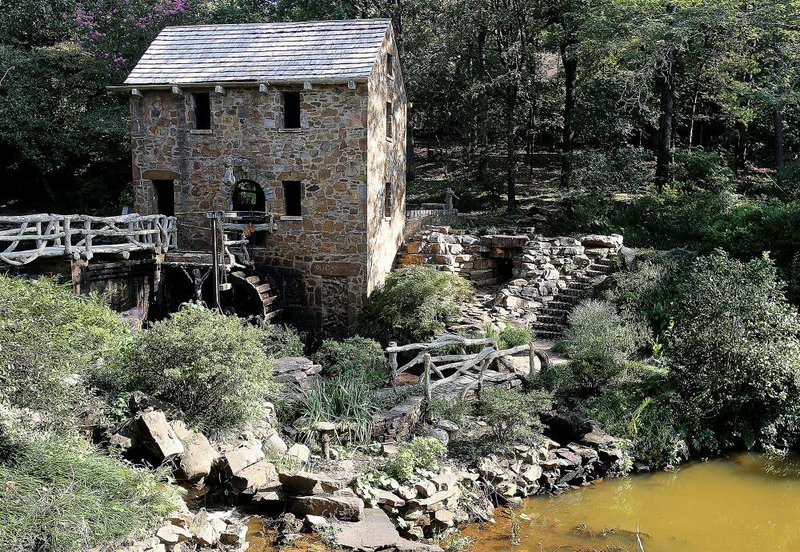 The newly operational waterfall at the Old Mill in North Little Rock will be dedicated Wednesday. The park will be closed Monday and Tuesday to prepare for the event. - Photo by Thomas Metthe

Water will cascade from a 50-foot-wide rock wall for the first time in more than seven decades at North Little Rock's Old Mill when a new waterfall opens to the public Wednesday.

The project makes the waterfall operational for the first time since the late 1940s or early 1950s. Restoring that feature takes the Old Mill closer to its original design, according to a North Little Rock Parks and Recreation Department news release.

About 400 feet of pipe was installed this summer to pull water from the lake below the Old Mill at T.R. Pugh Memorial Park, Lakeshore Drive and Fairway Avenue. Water will flow from a 50-foot-wide rock wall into the pond near the gristmill, providing power to turn the Old Mill's water wheel.

[NEWSLETTER: Sign up for the Week in North Little Rock email at arkansasonline.com/emails]

Arguably the most popular -- or the most famous -- spot in North Little Rock, the replica of an 1880s water-powered gristmill was part of the opening sequence in the 1939 film Gone With The Wind. Completed in 1933, the Old Mill site became part of the National Register of Historic Places in 1986.

The Old Mill is to be closed Monday and Tuesday for maintenance and a park cleanup in preparation for Wednesday's grand opening.

Closing the park Monday and at least part of Tuesday will allow for some much-needed sprucing up, said Terry Hartwick, city Parks and Recreation director.

"We want to clean up some of the debris and mud and silt that's been sitting there for a lot of years," he said. "I think we'll just be shutting it down for a day and a half.

"For the wheel itself, we're going to take it out and grease its bearings," he said. "We just want to make it so it's working good."

The city has provided much of the water to keep the wheel turning.

"We put in a big pump and ran a line from the east side across one of the dams to a pump that now circulates the water," Hartwick explained. "It actually circulates the water in the pool through the pipe, back to the waterfall that will turn the wheel, then it sucks it back up and goes right back around again."

The Old Mill and the park are regular stops for school groups, tourists and families. The park's backdrop is a favorite spot for prom pictures, and wedding and engagement photos. The park is open dawn to dusk and admission is free.

Some delays in getting the project finished cropped up because the team needed to exchange its first pump for a bigger model to increase the water flow, Hartwick said.

"The first pump was too small," he said. "So we ordered a larger one."

The first test of pumping water over the waterfall was Thursday. It was successful, but could have been better, so the city plans to add a bigger pump motor. The part is scheduled to be delivered Tuesday morning and installed in time for Wednesday's grand opening, Hartwick said Friday.

"I think we need a little bit more pressure, a bigger motor," he said after Thursday morning's test. "It didn't work to everybody's satisfaction."

Replacing the pump motor will increase the water flow and speed, Hartwick said.

Bert Turner, president of the Friends of the Old Mill, said the waterfall "looked good," but he agreed about the need to increase the flow. His volunteer group helps maintain the park.

"The water flow was not quite what we expected," Turner said. "We're making one slight change on the motor. That looks like it's going to work."

The water "is still going to appear like magic out of the rocks. It sounds good, too," he said. "We could all hear it."

In addition to the waterfall, city parks workers finished replacing the roof on the Old Mill in June, and worked to preserve its historic status and look.