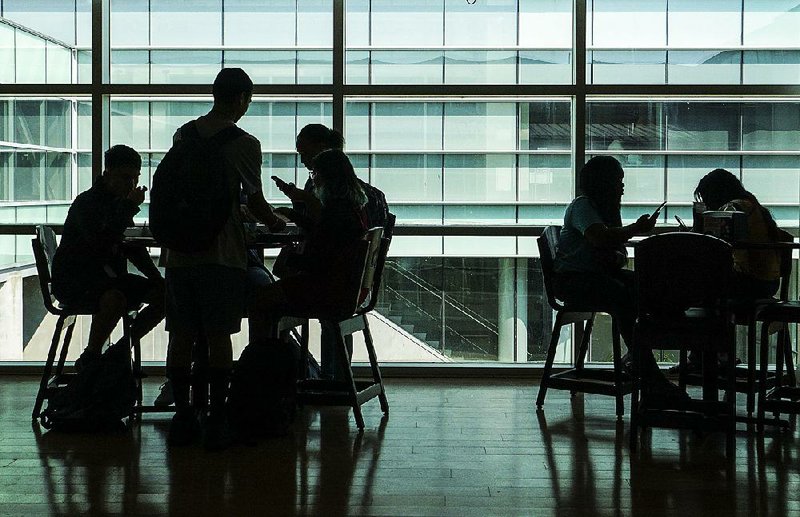 Arkansas Democrat-Gazette/MITCHELL PE MASILUN -- 9/19/2018 -- Students check phones and commiserate during the lunch hour at the Donaghey Student Center on the campus of the University of Arkansas at Little Rock Wednesday, Sept 19, 2018.

The University of Arkansas at Little Rock's enrollment of undergraduate, graduate and law school students dropped by 763 students this fall from last year, figures provided by the university show.

The university counted 9,270 such students last fall, and in this fall's preliminary report the school counted 8,507. That's a drop of 8.2%.

Budgeting for a 1% enrollment decline this fall, the university faces a projected $5 million deficit in addition to the $5.6 million deficit that was already included in its budget. The budgeted deficit is to be covered by reserves.

Earlier this month, Andrew Rogerson resigned suddenly as UALR's chancellor after about three years on the job. He'd vowed in 2017 to turn around years of enrollment drops at the university, but the budget issues and enrollment drops continued.

On Thursday, the University of Arkansas System board of trustees approved Christina Drale to serve a two-year period as UALR's chancellor. She had been serving as the university's interim executive vice chancellor and provost.

The numbers are among the more recent disappointments at the university, but new leadership in the student affairs office is already changing the office's setup, which officials hope has already made a difference.

Amid a yearslong enrollment slide, leaders see some positives.

[NEWSLETTER: Sign up for the Week in North Little Rock email at arkansasonline.com/emails]

Enrollment at the William H. Bowen School of Law is up 26 students from last year. The university counts 449 law students this fall, compared with 423 last fall and 400 the fall before that.

"We're fairly excited, because one of the most critical numbers for us is new students coming into the institution," said Cody Decker, UALR's interim vice chancellor for student affairs, who took over for Mark Allen Poisel after Poisel's resignation in July.

Other Arkansas universities, including the University of Arkansas, Fayetteville and the University of Central Arkansas, reported smaller incoming freshman classes this fall compared with last fall. However, those figures were not overall "new undergraduate" numbers that would contain transfer students.

UALR has not finished counting whether some of the new undergraduates were actually new transfers whose transcripts have not come in yet, rather than first-time freshmen, Decker said.

Arkansas Tech University reported that its overall new undergraduate enrollment, including incoming freshmen and transfers, increased from 2,124 students to 2,483, per preliminary estimates. That was after an undergraduate decline of 160 from fall 2017 to fall 2018.

The number of new undergraduates at UALR has flattened this year, with about a 1% increase, Decker said. But the number of credit hours they are taking is up 3.3%, meaning more appear to be full-time students than last year.

This fall also will be the school's second annual conference for pre-law undergraduate academic advisers. In Arkansas, he said, pre-law advisers are usually faculty members with other responsibilities rather than full-time advisers.

The law school tries to reach those advisers and students and emphasize Arkansas' need for attorneys. The state routinely ranks at the bottom in the nation in the ratio of attorneys to residents.

Law school officials try to emphasize the school's core values to excite students about UALR's focus -- access to justice, public service and professionalism -- and, from what Dean Theresa Beiner can tell, it's worked.

Stewart, who previously taught education at the University of Cincinnati, started her new job about five months ago by reaching out to area superintendents, who were receptive to working with the university.

UALR will now host an annual counselor luncheon, starting this fall, inviting all school counselors in Arkansas. Afterward, counselors who attend will each be given a $1,000 scholarship to award to the student at their school who they feel is most deserving of the award. The student must meet UALR's admissions requirements and attend UALR.

Such luncheons were done at UALR years ago, Stewart's heard, and they were done regularly at the University of Cincinnati.

Stewart sees similarities between her former school and UALR. Both are large, urban campuses with similar student bodies, surrounded with school districts with potential students.

"There's just a lot of opportunity to not only help provide pathways and avenues for our young people to higher education right here in their hometown, in their home county," Stewart said.

Recruiters are working with more high school guidance counselors and principals. Rather than just setting up tables and handing out brochures, they are meeting with students one-on-one to help them through the school and scholarship application processes.

Some newer changes will affect recruiting this coming year. The university started purchasing more student data from the ACT to recruit students who have scored within a certain range in nearby locations.

Last year, Decker said, budget cuts prompted former leadership to stop purchasing the data after obtaining only 14,000 names. He said the university expects to purchase data this fall for between 40,000 and 50,000 names in Arkansas and surrounding states, particularly Texas.

Decker wants to make changes throughout the student affairs office.

He's recently allowed the admissions staff to have access to information students supply in their applications, which may indicate what scholarships students are eligible for. Previously, the university's office of financial aid had kept that information, citing student privacy concerns. That meant officers working with prospective students couldn't tell students what scholarships they could apply for, or help them apply for them.

Additionally, different student affairs offices had been using incompatible software, meaning staff members had to enter student information twice -- once in each program. Decker has asked the university's information technology staff to help address this, which Decker said wasn't an efficient use of employee time.

But after the recent investments in relationships with K-12 schools, and the adult education Excel Center at Goodwill, Stewart said the next focus will be on attracting transfer students, a potentially large market for UALR.

Decker said the university has started the Trojan Transfer Scholarship, which provides between $2,000 and $4,000 to students with 3.0 grade-point averages at their original institution.

Transfer students comprise a higher share of UALR's enrollment -- 8.3% of total students and 11% of undergraduate students during the 2017-2018 academic year, according to National Center for Education Statistics data -- than at all other Arkansas public universities.

But the number of transfer students at UALR has declined in recent years, in part, Decker said, because of declining enrollment at the university's top feeder institution, the University of Arkansas Pulaski Technical College in North Little Rock.

Another area that continues to drop is the number of graduate students. Those students are making up a smaller and smaller portion of the school's overall student enrollment, not including high school students. Historically, graduate students have made up a larger share of UALR's student body than at other Arkansas universities.

UALR faculty members have asked for university leadership to focus on the students who have traditionally enrolled at UALR disproportionately than at other schools, such as graduate, transfer and nontraditional students.