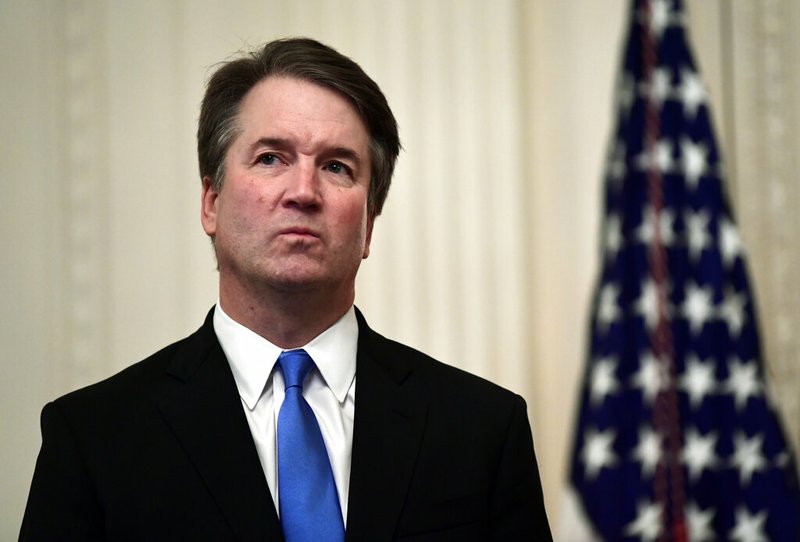 FILE - In this Oct. 8, 2018, file photo, Supreme Court Justice Brett Kavanaugh stands before a ceremonial swearing-in in the East Room of the White House in Washington. At least two Democratic presidential candidates, Kamala Harris and Kamala Harris are calling for the impeachment of Supreme Court Justice Brett Kavanaugh in the face of a new, uninvestigated, allegation of sexual impropriety when he was in college. (AP Photo/Susan Walsh, File)

NEW YORK — President Donald Trump on Monday said Supreme Court Justice Brett Kavanaugh is under assault, following a New York Times story about a sexual misconduct allegation that was revised to reflect that the alleged victim couldn't recall the incident.

The newspaper has also apologized for an offensive tweet that was sent out to promote the weekend article.

The Times reported on an allegation that Kavanaugh exposed himself at a Yale University party as a freshman. That new allegation was included in an article, excerpting an upcoming book about Kavanaugh classmate Deborah Ramirez, who had claimed the future justice pulled down his pants and thrust his penis at her at another time at a different Yale party.

In writing about the new allegation, the story did not initially include the detail that the woman supposedly involved in the incident declined to be interviewed, and that her friends say she doesn't recall it. The article was revised to include that information, with an editor's note explaining the revision.

It was not immediately clear why that detail had been left out.

Kavanaugh denied Ramirez's accusation in the past. He declined to comment on the new one, according to a court spokeswoman.

The president has jumped to the defense of his Supreme Court appointee on Twitter, saying "the one who is actually being assaulted is Justice Kavanaugh, assaulted by lies and fake news."

Trump said Kavanaugh should start suing people for libel, or the Justice Department should come to his rescue.

The newspaper also apologized for a tweet sent out Saturday through the account of its opinion section, where the Kavanaugh piece ran. The tweet said, in part, that "having a penis thrust in your face at a drunken dorm party may seem like harmless fun."

The Times later said that the tweet was "clearly inappropriate and offensive."