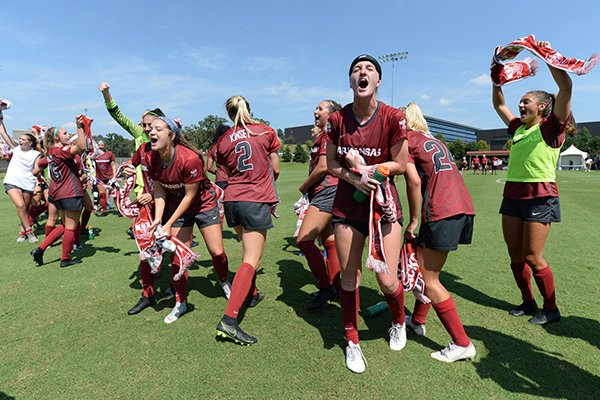 Arkansas players celebrate following a 2-0 victory over No. 1 North Carolina on Sunday, Sept. 15, 2019, in Fayetteville. - Photo by Arkansas Razorbacks

FAYETTEVILLE -- The University of Arkansas football team got fans excited with a victory Saturday, but it was the Razorbacks soccer team that sent the faithful into a frenzy Sunday afternoon.

The Razorbacks made history by scoring two second-half goals to stun No. 1 North Carolina 2-0, in front of a crowd of 1,058 at Razorback Field.

It was also the Razorbacks' second victory over a ranked opponent in four days, after knocking off No. 22 Baylor, 2-0, on Thursday in Waco, Texas.

"It's obviously a big win for us," Razorback Coach Colby Hale said. "Like I just told the team, there are not a lot of things that we haven't checked off in this program, but we had never beaten the No. 1 team."

Freshman Anna Podojil broke the scoreless tie at the 63-minute mark of the second half, scooting behind two North Carolina defenders on the counter attack for a 12-foot shot to the back of the net. Marissa Kinsey set the shot up with a pass to Taylor Malham, who made a nifty pass to Podojil in the middle of the field to give Arkansas the 1-0 advantage.

"It felt so good to get on the scoreboard first after working so hard for a goal the entire game," said Podojil, who now has five goals this season. "It was an amazing ball by Marissa, and nothing feels better than celebrating with your teammates."

Arkansas (6-1-1) managed only three shots on goal, but two of those produced goals. North Carolina (7-1-0) outshot the Razorbacks 12-10 but were stymied for the first time this season.

Junior forward Parker Goins added some breathing room for the Razorbacks when she flicked the ball in on a pass from Tori Cannata to make it a two-goal lead with 9:22 left.

Goins, who was recruited heavily by the Tar Heels out of Tulsa Union, was all smiles afterward, giving credit to the energized crowd for keeping the team motivated.

"I think today may have been the loudest they have been, and it just brought so much energy," she said. "And after scoring that goal and hearing them, just made me so happy."

Razorback goalkeeper Katie Lund recorded her fourth shutout of the season with a three-save effort against the Tar Heels. The 6-foot-1 senior, who transferred from TCU, has allowed just one regulation goal this season.

"This win was huge," Lund said. "We've all really worked so hard and trusted in each other, and we knew we could do it if we stuck together. It's all about the defense and the team that's in front of me. If they don't do their job then I can't do mine. So, props to them for blocking so many shots and doing their best. It's their win." 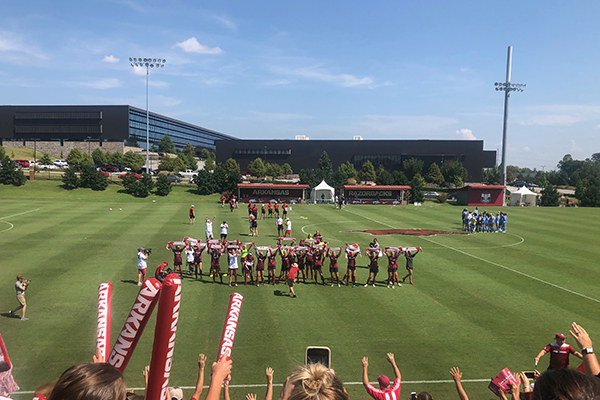