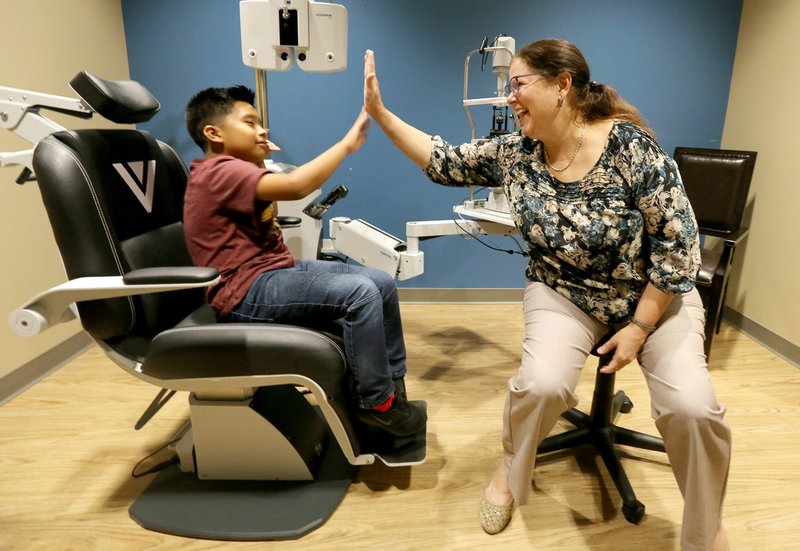 FAYETTEVILLE -- Parents in Northwest Arkansas no longer have to travel far to find a doctor who specializes in eye treatment for children.

Vold Vision has hired its first pediatric ophthalmologist, Dr. Sharon Napier. Napier trained residents and fellows for about 20 years at the University of Kentucky's College of Medicine.

• Amblyopia or “lazy eye”: When the vision in one of the eyes is reduced because the eye and the brain are not working together properly. It is the most common cause of vision impairment in children.

• Diabetic retinopathy: A common complication of diabetes characterized by progressive damage to the blood vessels of the retina, the light-sensitive tissue at the back of the eye necessary for good vision. It’s the leading cause of blindness in American adults.

• Glaucoma: A disease that can damage the eye’s optic nerve and result in vision loss and blindness. Glaucoma occurs when the normal fluid pressure inside the eyes slowly rises.

"What goes on in childhood with your eyes can affect your vision for the rest of your life," Napier said.

She sees kids for issues such as strabismus, or "crossed eyes," a condition she said is commonly misunderstood as an issue that cannot be fixed. Strabismus is caused by poor eye muscle control and can affect children's hand-eye coordination. It can be treated with glasses or surgery, she said.

Amblyopia, or "lazy eye," is also a common reason for doctor visits.

Napier sees patients in neonatal intensive care units. Some children need to see a pediatric ophthalmologist because they have other diseases, such as diabetes or a form of cancer, retinoblastoma, affecting their vision, she said. Some babies have cataracts.

Neither Henry Eye Clinic nor The Eye Center in Fayetteville have pediatric ophthalmologists, representatives of the clinics said. Boozman-Hof Eye Care doesn't have the specialists at its Rogers nor its Bella Vista offices, a representative said. Arkansas Children's Northwest Hospital in Springdale doesn't have any pediatric ophthalmologists on staff, although seven specialists see patients at the Little Rock hospital, a spokeswoman said.

She said families have to drive to Little Rock or other cities for the level of care she provides.

Gabriela Garcia was first told her 8-year-old son, Alexander Garcia, had pink eye at age 2. Alexander's routine for years was to get sent home from school with blurry vision and watery eyes, go to the doctor, get diagnosed with conjunctivitis, get eye drops and temporarily get better.

Conjunctivitis, or "pink eye," involves the swelling of the thin layer lining the white part of the eye and the inside of the eyelid and/or eyelid. It can make eyes itchy and eyelids crusty, according to the federal Centers for Disease Control and Prevention.

When his mom took him to Vold Vision, she was told Alexander had scarring in his eye because of problems with his cornea and would go blind if it wasn't treated.

Babies' eyes should be screened before they turn 1, and screenings for babies under 1 year old are free at Vold Vision, Napier said.

ARKids First, a government-funded insurance program for children, covers specialty eye treatments if they are determined medically necessary, said Amy Webb, spokeswoman for the Arkansas Department of Human Services. Each case is reviewed individually, she said.

"Undetected and untreated eye and vision disorders, such as amblyopia and strabismus, too often become barriers to learning, leading to delayed reading and poorer outcomes in school," Meghan Endicott of the American Optometric Association wrote in an email.

Babies should be able to focus, see color and have depth perception by the time they are 6 months old, she said.

"You can really only improve vision in kids up to certain ages," Napier said. "The earlier you treat them, the better the brain will learn to see."

Screenings are especially important for children because unlike adults who know if their vision is worsening, children have no way of knowing they have poor vision if that's the way they've always seen.

Parents should look for excessive tearing, red or encrusted eyelids, constant eye turning, sensitivity to light and the appearance of a white pupil, according to the American Optometric Association.

Pediatric specialists do one- to two-year fellowships working with children following their traditional training, said Dr. David Epley of the American Academy of Ophthalmology.

The United States doesn't have enough of the specialists, he said.

"Most major metropolitan areas have enough to get by, but if you doubled the number, all those people would still be busy," Epley said.