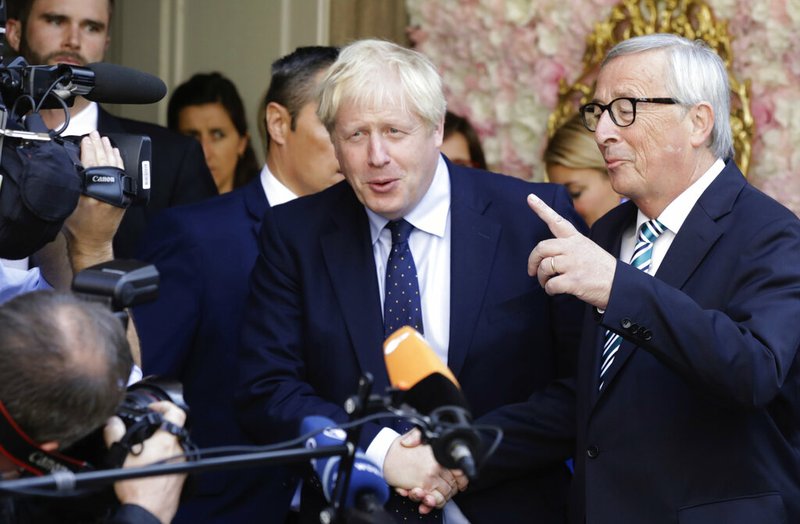 European Commission President Jean-Claude Juncker, right, speaks with the media as he shakes hands with British Prime Minister Boris Johnson prior to a meeting at a restaurant in Luxembourg, Monday, Sept. 16, 2019. British Prime Minister Boris Johnson was holding his first meeting with European Commission President Jean-Claude Juncker on Monday in search of a longshot Brexit deal. (AP Photo/Olivier Matthys)

The two men talked over a two-hour lunch of snails and salmon in Juncker's native Luxembourg, amid claims from the U.K. -- though not the EU -- that a deal is in sight.

The European Commission said after the meeting that Britain had yet to offer any "legally operational" solutions to the issue of the Irish border, the main roadblock to a deal.

"President Juncker underlined the Commission's continued willingness and openness to examine whether such proposals meet the objectives of the backstop"-- a border provision rejected by Britain.

"Such proposals have not yet been made," the European Commission said in a statement, adding that officials "will remain available to work 24/7."

Johnson says the U.K. will leave the EU on the scheduled Oct. 31 date, with or without a withdrawal agreement. But he insists he can strike a revised divorce deal with the bloc in time for an orderly departure. The agreement made by his predecessor, Theresa May, was rejected three times by Britain's Parliament.

Johnson said in a Daily Telegraph column Monday that he believes "passionately" that a deal can be agreed and approved at a summit of EU leaders on Oct. 17-18.

While the EU says it is still waiting for firm proposals from the U.K., Johnson spokesman James Slack said Britain had "put forward workable solutions in a number of areas."

He declined to provide details, saying it was unhelpful to negotiate in public.

The key sticking point is the "backstop," an insurance policy in May's agreement intended to guarantee an open border between EU member Ireland and the U.K.'s Northern Ireland. That is vital both to the local economy and to Northern Ireland's peace process.

British Brexit supporters oppose the backstop because it keeps the U.K. bound to EU trade rules, limiting its ability to forge new free trade agreements around the world after Brexit.

Britain has suggested the backstop could be replaced by "alternative arrangements," but the EU says it has yet to hear any workable suggestions.

Neither side expects a breakthrough Monday, but much still rests on Johnson's encounter with Juncker, who like other EU officials is tired of the long-running Brexit drama, and wary of Johnson's populist rhetoric.

The British leader has vowed to leave the bloc "do or die" and compared himself to angry green superhero the Incredible Hulk, telling the Mail on Sunday newspaper: "The madder Hulk gets, the stronger Hulk gets, and he always escapes ... and that is the case for this country."

Ruffalo tweeted: "Boris Johnson forgets that the Hulk only fights for the good of the whole. Mad and strong can also be dense and destructive."

Monday's meeting marks the start a tumultuous week, with the Brexit deadline just 45 days away.

On Tuesday, Britain's Supreme Court will consider whether Johnson's decision to prorogue -- or suspend -- the British Parliament for five weeks was lawful, after conflicting judgments in lower courts.

Johnson sent lawmakers home until Oct. 14, a drastic move that gives him a respite from rebellious lawmakers determined to thwart his Brexit plan.

Last week, Scotland's highest civil court ruled the prorogation illegal because it had the intention of stymieing Parliament. The High Court in London, however, said it was not a matter for the courts.

If the Supreme Court overturns the suspension, lawmakers could be called back to Parliament as early as next week.

Many lawmakers fear a no-deal Brexit would be economically devastating, and are determined to stop the U.K. from crashing out of the bloc on Oct. 31.

Just before the suspension, Parliament passed a law that orders the government to seek a three-month delay to Brexit if no agreement has been reached by late October.

Johnson insists he will not seek a delay under any circumstances, though it's not clear how he can avoid it.

Foreign Secretary Dominic Raab said Monday that the government would obey the law, but suggested it would try to find loopholes.

"I think the precise implications of the legislation need to be looked at very carefully," he told the BBC. "We are doing that."