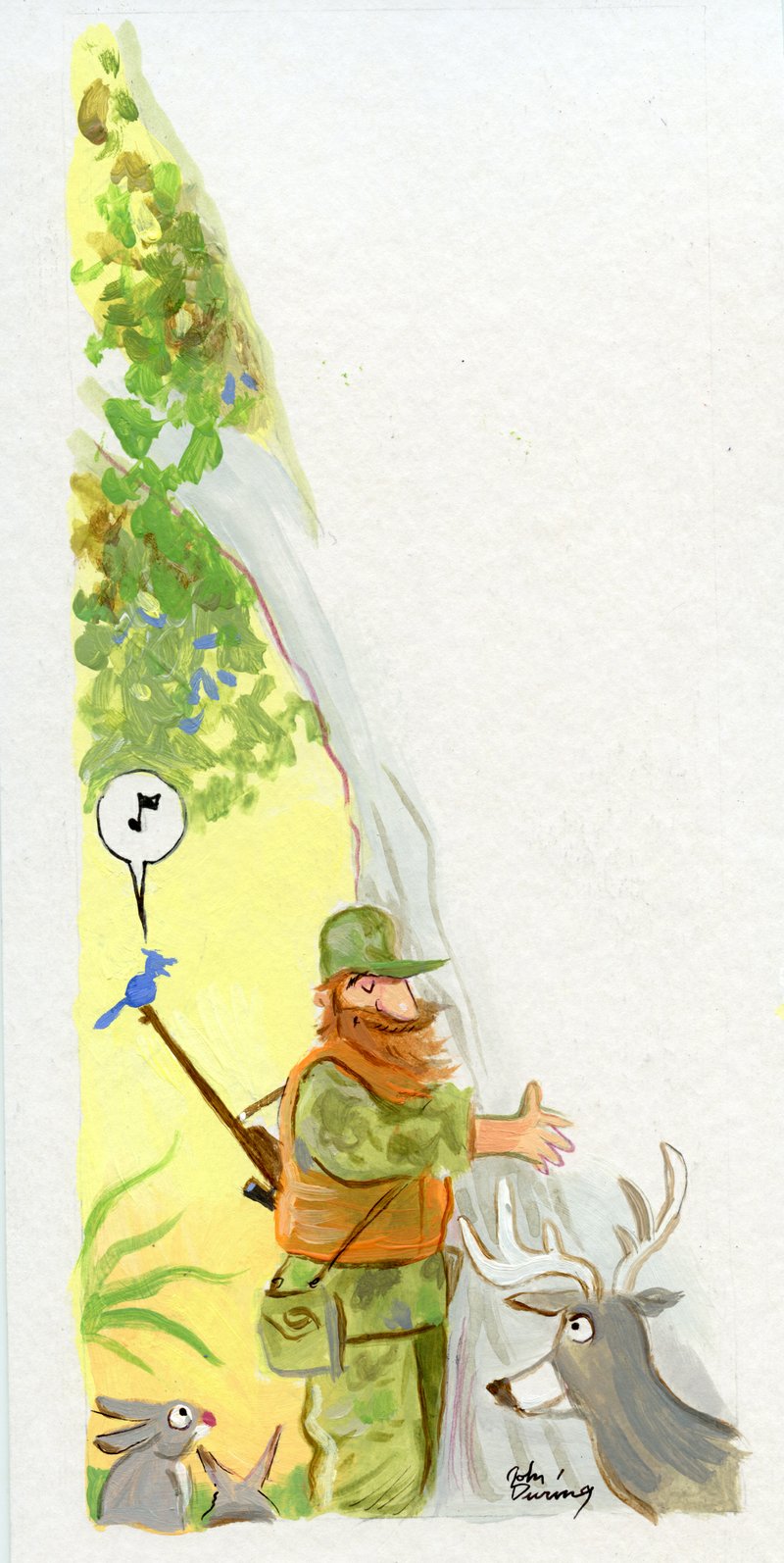 As a retired wildlife biologist and lifelong quail hunter, I've heard a lot of opinions on why bobwhite quail have declined precipitously in Arkansas. The most common opinion lays the blame at the feet of coyotes.

Despite the overall decline, my brother Dennis (also a retired wildlife biologist) and I have hunted wild quail in Arkansas to the present, finding and killing a comparable number to that of our youth and early adulthood. We just don't find good quail numbers in nearly as many places as we once did. I know this to be true because I have kept a hunting journal for most of the past 60 years.

A while back, I read a much different opinion on the reason for the quail decline--the absence of apex predators such as cougars, bears, wolves, and bobcats. This opinion was expressed by Mr. Richard Mason in a guest column in the Dec. 20, 2014, Arkansas Democrat-Gazette titled, "A rare bird, indeed: We can bring quail back to the state."

In the lead, Mr. Mason states, "... the loss of habitat would be wrong." The body of his column deals with the "explosion of possums, 'coons, armadillos, rats, skunks, foxes and the very worst--feral hogs." He concludes by stating, "There is only one way to restore ... quail ... We must restock the large predators to the point where they control the animals that eat quail eggs."

For the past year or so, Mr. Mason has written a weekly article for the Democrat-Gazette, and about every six weeks he repeats the above opinions. Most recently, the Aug. 18 Democrat-Gazette ran his column headlined "Out-of-balance ecosystem," pointing out that

the lack of apex predators has caused a severely imbalanced ecosystem that's responsible for the decline in quail numbers.

While I agree that our ecosystem is out of balance--and not just in terms of apex predators--I totally disagree with Mr. Mason's conclusion about the quail decline.

First, let's look at quail through Arkansas' settlement history. Early explorers such as Henry Schoolcraft, Thomas Nuttall, William Dunbar and others left us a wealth of information about large predators, wild turkeys, large game animals and prairie chickens--all of which appear to have been at least locally plentiful--but said virtually nothing about quail.

Arkansas was almost entirely forested when settlers first arrived, with interspersed native prairies that resulted from year-round catastrophic fires (exception: the Grand Prairie). Most quail during that period were undoubtedly associated with prairie areas or with frequently burned forests such as the pine-bluestem ecosystem in the Ouachitas. Pictures of this latter ecosystem from the late 1800s show large, thinly stocked stands of pine with tall prairie grasses underneath.

In the mid-20th century, Trusten Holder edited a review of the history of wildlife in A Survey of Arkansas Game and stated that after the Civil War, sportsmen and commercial hunters began to hunt and exploit quail. The clearing of land for farms, split rail fences, annual burning of high-graded woodlands for cattle forage, soil disturbance resulting in weedy crop fields, native grass pastures and horse/mule power agricultural practices of the time, which extended until large-scale mechanized farming came on line in the mid-20th century, benefited quail immensely, although the benefits were purely coincidental.

During this same 85-year period, apex predators and several game animals were mostly eliminated from the state. The last elk was killed in the 1830s; small herds of bison were found until the late 1800s. Black bear and deer numbers were greatly reduced by the early 1900s. The last prairie chickens were killed in 1915, as the Grand Prairie and other smaller prairies were plowed under for crops.

Cougar and wolf populations were also severely depleted due to more than a century of indiscriminate killing, and government predator control programs of the early 20th century sped along their demise.

Conversely, feral hogs were found all over Arkansas under free-range laws that existed then; in many places such as the lower Ouachita River, feral hogs have been present continually since at least the early 1800s.

Since settlement, the landscape of Arkansas also changed dramatically. The Mississippi Alluvial Plain (Delta) was originally about eight million acres of bottomland hardwoods, cane thickets and swamps/oxbow lakes along with about one million acres of prairie. By the late 20th century, bottomland hardwoods were reduced by 90 percent; the Grand Prairie and other prairies are gone. While the whole state was probably 90 percent forested upon settlement, it has been around 50-60 percent wooded for several decades now. The other 50 percent or so is mostly row crops or introduced sod-forming grass pasture.

The creation of the National Forest system in the early 20th century led to fire suppression policies. Smokey Bear, the icon for fire suppression, was and is the friend of forestry but the enemy of bobwhite quail. Fire has always been a major factor in quail habitat/population levels--and was directly linked to the quail that existed upon settlement--but current policies associated with the use of fire (exclusion in commercial forests, cool-season burns only, smoke management, narrow burn parameters, liability, etc.) result in very little use of this practice today.

So how does this vast change in the ecosystems of Arkansas since settlement relate to the quail decline?

While landscape changes after the Civil War helped quail numbers greatly, mechanized agriculture introduced about the era of WWII resulted in profound changes to land ownership patterns, field size, and vegetation control using herbicides. Pasture grasses, land fertilization, commercial timber production methods, and many other facets of forestry and farming were introduced. These changes parallel the decline in quail numbers because modern agricultural and forestry practices have destroyed most quail habitats.

Before we talk about apex predators, let's talk about feral hogs and medium-sized predators such as raccoons. Feral hogs were missing from most of the state from the mid-20th century (due to the end of free-range laws) until the last 15 or 20 years, and despite the recent boom in hog numbers, many areas have no feral hogs today.

Raccoons? As a fur-bearer, at least some pressure was put on this resource until fur prices dropped out around 1990. Since that time, it would appear their numbers have increased greatly. One possible contribution is that feeding corn to deer exploded about the same time and is extremely prevalent today (done by 89 percent of Arkansas deer hunters, according to one recent survey). There is little doubt that it benefits feral hogs and raccoons by increasing their reproductive fitness.

Now to apex predators. Black bears, coyotes and bobcats are alleged to be necessary to control small predators and hogs, but the first two mostly eat vegetation, insects, offal, discarded poultry, road kills and a host of other foods; their diet is omnivorous. Bobcats are carnivores and primarily eat rabbits and small rodents, but will occasionally eat deer and wild turkey.

While any of these large predators will eat hogs or raccoons, both normally compose a small portion of their diet. Based on the rapid growth and expansion of feral hogs and the apparent high population levels of smaller predators for the past several decades, it would appear that none of these three apex predators are controlling either. Since a lot of bears also now get food at corn feeders, the percentage of mammals they eat, low to begin with, may actually have declined.

Wolves are more of an enigma. Red wolves are an endangered species now, as coyotes that spread across Arkansas in the last half of the 20th century have bred them out of existence in the wild through hybridization. The coyotes you see and hear today carry red wolf genes.

Mr. Mason ended his 2014 guest article by stating, "You can release the first red wolf pack in my backyard." Since only a couple of hundred red wolves remain alive today, restocking them to a state full of coyotes is out of the question.

Finally, cougars (panthers, pumas, catamounts) have been at very low population levels in Arkansas for at least the last 100 years. While there is research that shows Florida panthers eat feral hogs for about a quarter of their diet and Pacific Rim cougars eat raccoons for about the same percentage, no one knows what they would eat if restocked to Arkansas.

Across research studies, cougar diet consists of about 80 percent deer and elk. I strongly suspect that deer would be the primary prey here. If that were the case, cougars probably would have little impact on hogs or smaller predator numbers in Arkansas. Furthermore, even a dense population of cougars, say 100 in Union County's 1,055 square miles, would not significantly affect smaller predator, feral hog or deer numbers based on their normal dietary intake of a deer every 1-2 weeks.

Meanwhile, Dennis and I continue to find and kill good numbers of quail on the few areas that have suitable habitat in Arkansas today. Our hunts have mostly centered in east-central Arkansas where row crop land has been taken out of production and planted to trees under various programs.

For the first 10 years or so these areas, when coupled with brushy fence rows or ditch banks, nearby row crops and small woodlots, offer prime quail habitat that closely resembles agricultural quail habitat of bygone decades.

In 2003-04 and 2004-05, Dennis and his hunting companions killed 128 and 127 quail, respectively, on public and private land on the periphery of Bald Knob National Wildlife Refuge. Plant succession has resulted in 20-25 year-old trees about 30 feet tall shading out ground level grasses and forbs. Guess what? Quail are virtually gone there today due to habitat change.

We have adapted by moving on to other young tree plantations and set aside ground in other areas. We usually find from 3-7 coveys of birds and average about three birds apiece on each hunt.

The fact that we have identified and successfully hunted good quail habitats to the present in Arkansas tells me that it ain't a problem of the absence of apex predators--it is primarily a habitat issue resulting from the dramatic change to our landscape.

Quail are still found in good numbers in parts of their historic range, particularly the Great Plains from Nebraska to Texas--the Rolling Hills portion of the latter state had record-high quail survey indices as recent as 2015-16--thanks to plentiful native grass-dominated habitat on the landscape.

At an Arkansas Game and Fish Commission meeting back around 2005, the late Bob McAnally quipped that he had a new name for the quail program in Arkansas, "The 330 Quail Restoration Plan."

When asked what that was, Bob said, "All we have to do to restore quail in Arkansas is to reverse the land-use practices of the last three generations on 30 million acres."

If done, it will certainly be a tough row to hoe, taking several generations, given the huge ecosystem imbalance we now have from changes that have occurred to the landscape in Arkansas since settlement times.

Michael Widner lives in Conway and is the author of A Life with Gentleman Bob and a Few of His Kinfolk: Hunting Midwest Quail.