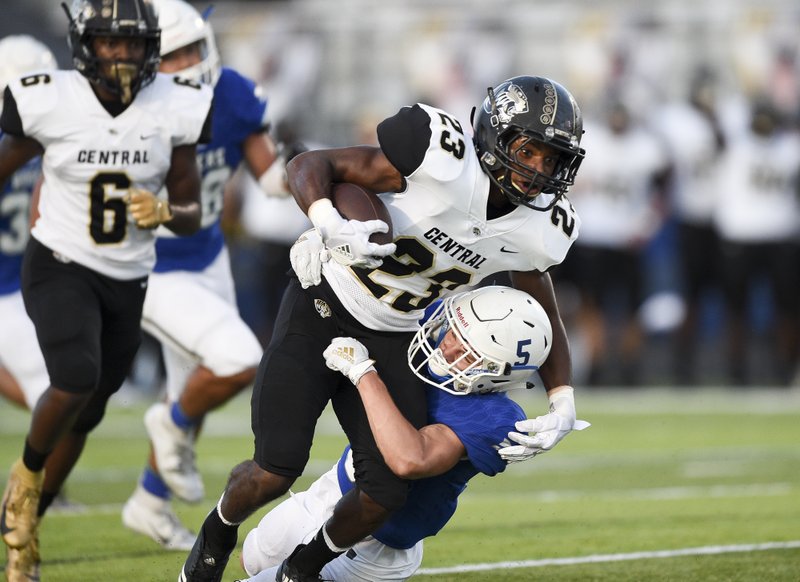 ROGERS -- Little Rock Central and Rogers combined to score 120 points a week ago against their opponents.

Neither team matched those fireworks Friday at Whitey Smith Stadium, but the visiting Tigers mustered a healthy offensive output and headed back to Pulaski County with a 42-25 nonconference victory.

"We still have a lot of improving to do," Little Rock Central Coach Kent Laster said. "The penalties we'll need to get cleaned up, but the main thing is we scored enough to win and held them to 25 because that's an explosive offense with a great group of receivers and that quarterback."

Rogers (0-2) is searching for answers with just one more nonconference game left before 7A-West play begins Sept. 27 at Van Buren.

"It seemed like the same thing as last week," Rogers Coach Mike Loyd said. "We take a 58-54 lead and then give up a one-play drive.

"We've got to bow up and decide if we want to win games or not. You can't win games doing stuff like that. We've got to make tackles and find a way to make plays on defense and get stops."

Junior quarterback Lawson Gunn threw four touchdown passes for the Tigers (3-0). The one that broke the Mounties' back was an 80-yarder on a screen pass to Sam Franklin after they had cut the Tigers' lead to a field goal on the previous drive.

"It's like popping the air out of a balloon," Loyd said. "You score, and then they hit a screen for 80 yards. It's tough when you work on screens and then that happens. Someone's going to have to bow up on defense and make a play when it counts at some point."

Gunn finished 17-of-24 passing for 348 yards and 4 touchdowns. His favorite target was Antoine Westbrook, who caught 9 passes for 167 yards, 2 of which went for scores.

The Mounties got on the board first near the end of the first quarter when Hunter Loyd found Mason Ross on a 16-yard strike.

Central answered by scoring 21 in the second quarter, using a pair of Gunn touchdown passes and a 59-yard touchdown run from Franklin to take an 11-point advantage at halftime.

The teams had a combined 30 penalties that totaled 273 yards.