Little Rock Parkview holds on, closes out victory over Marion 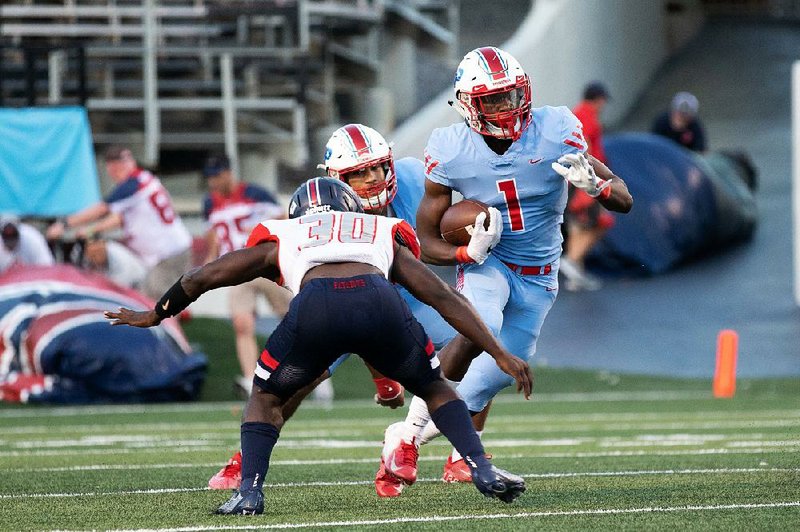 Following a string of close losses the last three seasons, Little Rock Parkview was finally able to close out a game.

Junior quarterback Landon Rogers threw for 224 yards and a touchdown, and senior fullback Thomas McCauley ran for two touchdowns in Parkview's 28-24 victory over Class 6A Marion on Friday night at War Memorial Stadium in Little Rock.

Class 5A Parkview (1-1) had lost its last six games decided by three points or less, including 24-21 last week at Class 7A Springdale. Parkview led 21-9 midway through the fourth quarter.

Marion (1-2) never led, but was within 28-24 after junior quarterback Daedrick Cail threw his third touchdown pass, a 19-yarder to junior wide receiver D.J. Johnson, with 5:20 remaining in the game.

Parkview drained the final 5:18, with Rogers' 11-yard run to the Marion 15 on third and 1 icing the game with 2:03 remaining. The drive began with a 27-yard run to midfield by tailback James Jointer.

"It feels great to be able to work through that tonight and be able to finish strong with these guys," Parkview Coach Brad Bolding said. "The great thing with these younger guys is you can see them get better each week. As coaches, we want them to get better overnight. But it doesn't happen that way."

Parkview finished with 457 total yards, almost evenly split between rushing (233) and passing (224). Jointer, one of eight sophomore starters for Parkview, ran 12 times for 119 yards and 1 touchdown. Rogers' only second-half completion, 47 yards to sophomore wide receiver Jalon Smith, set up McCauley's 6-yard touchdown run and a 28-17 lead with 3:19 remaining in the third quarter.

Parkview opened the game with a seven-play, 75-yard drive capped by Rogers' 51-yard pass that ricocheted off a defender to senior wide receiver Demetrius Feemster with 9:32 remaining in the first quarter.

Parkview led 14-0 after McCauley ran 2 yards for a touchdown with 10 seconds remaining in the first quarter. The touchdown came eight plays after Parkview recovered a muffed punt at its 28 -- one of four Marion turnovers.