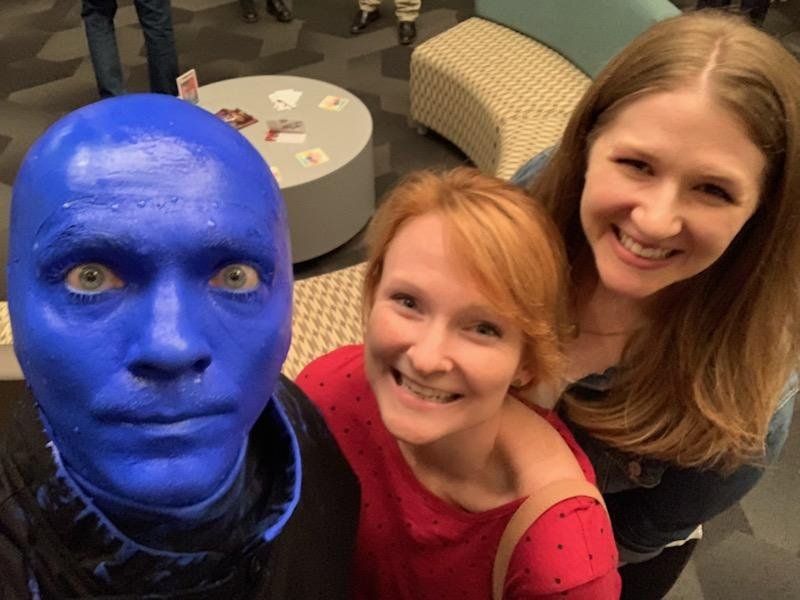 At last night's premiere performance of the new Blue Man Group show "Speechless," the characters made a surprise appearance in the lobby after the show. The men will perform in Fayetteville through Sept. 19.

International entertainment phenomenon the Blue Man Group officially premiered their new show "Speechless" at the Walton Arts Center in Fayetteville last night, Sept. 12, before it takes to the road for a new national tour.

Fayetteville was host to more than just the very first performances. The Blue Men and company have been in residence at the WAC since Aug. 12 developing and finishing the technical elements of the show -- the tech rehearsals. This time gives a creative team the opportunity and the space to not only flesh out every moment of the show, but see how everything comes together on a real stage and work out any kinks before the opening. The preview performances on Sept. 10 and 11 allowed for adjustments based on audience response and helped to nail the timing.

All of this is exciting because, as Fayetteville Mayor Lioneld Jordan noted in a press conference before the show, this is the second time the Blue Man Group has launched their national tour from Fayetteville. That relationship not only establishes Fayetteville and the WAC as internationally significant to the arts community, but also creates substantial economic impact as roughly 95 cast and crew members contribute to the local economy during their five and half week stay. In a gesture of gratitude, Jordan presented the key to the city to Benoit Mathieu, executive producer for Cirque, and Seth Wenig, executive producer for NETworks Presentations -- the entities responsible for Blue Man.

On that note of unification, the new show "Speechless" debuted to an all-ages crowd buzzing with excitement. The stage, bathed in blue light, revealed a workshop setting (though that might not be immediately clear) as the three iconic figures emerged to applause and laughter. The Blue Men are humanoid, though slightly alien, figures that use music, humor and their curiosity about the world around them to communicate nonverbally with showgoers -- whom, last night, the Blue Men seemed to be discovering for the first time. Fans of the show will be happy to know crowd interaction has not gone by the wayside for "Speechless." How could it? The Blue Men are too curious about the creatures sharing the space with them not to go out into the theater with their hand-held camera and investigate.

Other fan-favorite elements from previous Blue Man incarnations include the marshmallows, the PVC pipe used for drumming, and the three colorful drums center stage. If you know, you know. And if you don't, you should consider attending a show.

A Blue Man performance is unlike any other piece of theater I've ever seen and can be hard to describe within the confines of genre. There's comedy as the three characters engage their viewers and work (play) in their work-space; there are rock concert-level performances as they jam out on various found-object and innovative instruments; there's a form of narrative theater as you watch the characters interact with -- and be frustrated by -- technology; and there are immensely impressive visuals, with every inch of the set offering something to inspect.

As I watched the Blue Men interact with the set, I kept thinking about something lighting designer Jennifer Schriever said during a preview interview a couple weeks ago: When a Blue Man hits an instrument and the lights change, the connection of the drum stick hitting the drum is what controls that, not a crew member timing a button push. The designers have dug deep into constructing a set and instruments that are like living objects, she told me.

"It's pretty exciting if you allow yourself to realize the magic is in how we set it up for them, and they're able to create whatever music or lighting or world they want to create within that," Schriever said.

And that was pretty fun to think about as I watched the Blue Men record and remix sounds from the audience in real time, pull levers on the stage to release confetti or strike a drum or pipe with a mallet and watch a piece of the stage light up. "Speechless" is perhaps Blue Man's most ambitious project as far as technological integration, and last night's audience was delighted by it at every turn -- even during the moments carrying a slightly strange vibe or that felt a little off in the timing. But with strange, nonverbal, aliens as your protagonists, what can you expect? The weirdness is all part of the fun!