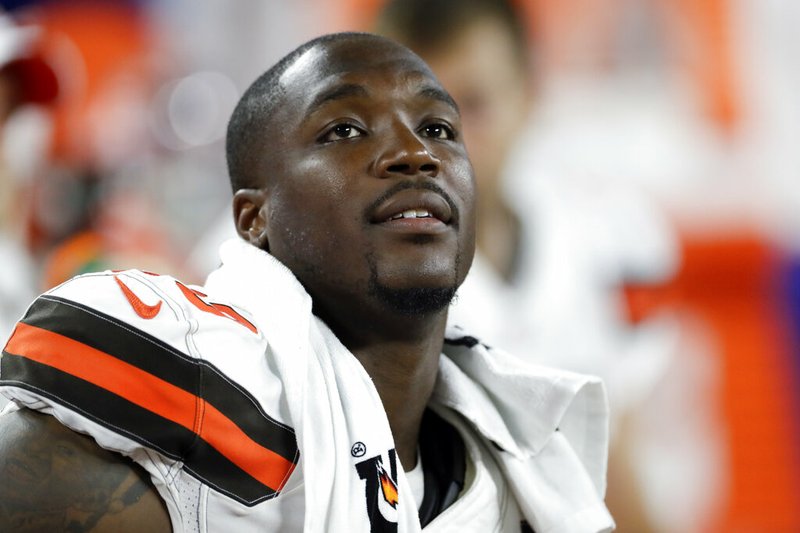 In this Aug. 8, 2019, file photo, Cleveland Browns defensive end Chris Smith (50) sits on the sideline during the first half of an NFL preseason football game against the Washington Redskins in Cleveland. Petara Cordero, the girlfriend of Smith has been killed in an accident early Wednesday, Sept. 11, 2019. The team said Cordero, 26, died when she was struck by an oncoming car on I-90 West at around 2 a.m. after she and Smith had pulled to the side of the road when the car he was driving had a tire malfunction and spun out. (AP Photo/Ron Schwane, File)

CLEVELAND -- The Cleveland Browns are determined to rally around defensive end Chris Smith, a former Arkansas Razorback, as he deals with the tragic death of his girlfriend, Petara Cordero.

Cordero was killed about 2 a.m. Wednesday when a car hit her on Interstate 90 near the West 140th St. exit in Cleveland. She was 26.

The Browns announced her death Wednesday afternoon in a news release.

Smith and Cordero had celebrated the birth of their daughter, Haven Harris Smith, last month.

Browns players were notified of the incident Wednesday morning during a meeting at team headquarters in Berea, Ohio, after Coach Freddie Kitchens had visited Smith at his home.

"We're all there for Chris right now, and I know he's going to need more than just our thoughts and prayers. He's going to need us [to be] there physically for him because that's going to be hard for him," defensive end Myles Garrett said during a phone interview with the Beacon Journal/Ohio.com.

"Everybody needs a support system. [The defensive linemen are] in the same [meeting] room. We share almost the entire day together, and it would be wrong of us not to be there for him at a time like this."

The Browns will have counselors in Berea throughout the week to provide emotional support and care to all players and staff. The Browns, who are preparing to face the New York Jets on Monday Night Football, will excuse Smith from team activities and allow him to grieve as he sees fit.

"Words cannot describe the sorrow we feel for Chris following the loss of his girlfriend, Petara," owners Dee and Jimmy Haslam said in a statement. "Our entire organization mourns with Chris, his family and the Cordero family. We will do everything possible to offer them our support, comfort and any resources in this most difficult time."

Smith had been driving a 2019 Lamborghini westbound on I-90 when a tire blew out, he told police, causing the car to veer left and strike the center median wall, according to a statement from the Cleveland Police Department.

Smith and Cordero exited the Lamborghini and were standing on the north shoulder of I-90 West when a 2017 Mazda 3 veered to the right side of the Lamborghini, struck the passenger-side doors of the car that were open and then hit Cordero, according to the police statement. Cleveland EMS arrived shortly thereafter and transported Cordero to Fairview Hospital, where she was pronounced dead.

According to the police statement, the driver of the Mazda, a 47-year-old woman, admitted to drinking, and toxicology reports are pending. Cleveland EMS transported her to Fairview Hospital, where she was treated and released.

Smith was neither injured nor impaired, according to the police statement. The causes of both crashes remain under investigation, and no charges have been filed.